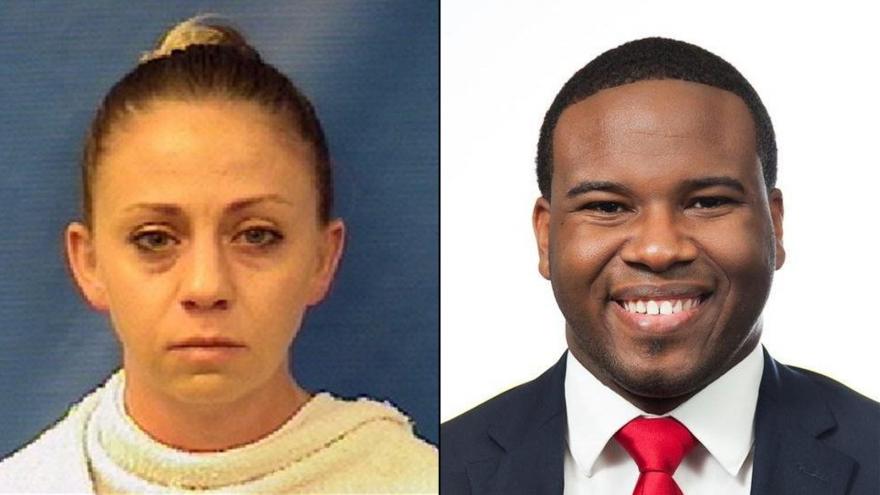 (CNN) -- On the eve of the what would have been Botham Jean's 28th birthday, jurors in the murder trial of the ex-Dallas police officer charged with killing him in his own apartment while she was off duty heard a few minutes of testimony before court ended on Saturday.

Amber Guyger's trial will enter its seventh day on Monday after jurors heard the brief testimony of defense witness David Armstrong, a Texas Ranger who described what a police officer might experience in a tense, quickly-evolving confrontation with a suspect.

Armstrong testified that a person may experience tunnel vision and short-term memory loss. He also said they may not hear at a normal volume.

Armstrong -- after viewing photos of the shorts Jean was wearing -- told Dallas County prosecutor Jason Hermus that Jean's pants didn't have pockets. The testimony may have been elicited to counter Guyger's account that she could not see the victim's hands when she fatally shot him.

The defense has not officially rested its case.

On Sunday, when Jean would have celebrated his birthday, his family and friends will attend a fundraising gala to launch the charitable Botham Jean Foundation in Dallas in his honor.

It was the first time the public heard from the former officer, who broke down on the witness stand Friday, saying she believed she had entered her own home and thought the man she encountered was going to kill her.

"I hate that I have to live with this every single day of my life," Guyger cried as she testified in her own defense.

"I ask God for forgiveness, and I hate myself every single day ... I wish he was the one with the gun who had killed me. I never wanted to take an innocent person's life," she said, her voice shaking.

Other residents of the apartment building testified Friday about going to the wrong apartment and a Texas Ranger was questioned about the shooting and use of force.

Guyger, who's charged with murder in Jean's death, struggled to maintain her composure most of the day.

The prosecution suggested, on cross-examination, that she cared more about herself at that moment than the man she had just shot. Guyger at one point appeared to turn to the victim's family in the back of the courtroom and apologize for what she had done.

The silhouetted figure moved toward her in a "fast-paced walk," she said. She couldn't see the person's hands.

"Hey, hey, hey," she said the person shouted, and she pulled the trigger.

Speaking about the day of the shooting, Guyger testified that she was tired on September 6, 2018, after a nearly 14-hour day and "just ready to go home" when she left work.

She said she was having an affair with another officer and had ended the relationship, even though the two shared intimate text messages. They were on the phone as she parked in the garage at home that night, she testified.

"I felt like it was morally wrong," Guyger said about her relationship with Martin Rivera, the officer.

Later Friday, Hermus, on cross-examination, sought to poke holes in Guyger's story, noting that she told responding officers that she believed it was her apartment but said nothing about Jean coming at her.

Guyger admitted under questioning by Hermus that she was trained in CPR but only "did a little CPR" and a sternum rub on the dying man. She testified that her mind was racing, that she was on the phone with a 911 operator. She said it didn't cross her mind that she had first aid supplies in her backpack.

Still, she found time to text her partner -- directly after the shooting and even sending sexual messages days later, Hermus said.

"You made choices and decisions that suited you more than him," the prosecutor said.

Hermus noted that witnesses who were across the hall during the episode testified that they didn't hear her demand that Jean show his hands.

"Because you didn't say that," Hermus said.

Hermus asked why Guyger did not back away from the apartment and call for backup instead of confronting her perceived threat. He said she didn't conceal and cover as officers are trained to do when coming upon a burglar.

"That was the only option that went through my head," she said.

Guyger was reminded that she took an 8-hour deescalation training course five months before the shooting.

"What did you take from that class?" the prosecutor asked.

"I don't remember," she replied.

Hermus showed video of Guyger's friends comforting her after the shooting and asked whether she could imagine what Jean felt in his final moments.

"That's what hurts," she said softly.

Hermus said Guyger shot Jean twice in the torso, in rapid succession, as she was trained to do.

"When you aimed and pulled the trigger at Mr. Jean, shooting him in center mass where you are trained, you intended to kill Mr. Jean?" the prosecutor asked.

Jean was on the couch in his shorts, watching TV and eating vanilla ice cream, when Guyger walked in and fired, Hermus told jurors this week.

Guyger has told police she mistakenly walked into the wrong apartment and thought she saw a burglar. Guyger lived in Apartment 1378, one floor below Jean's unit.