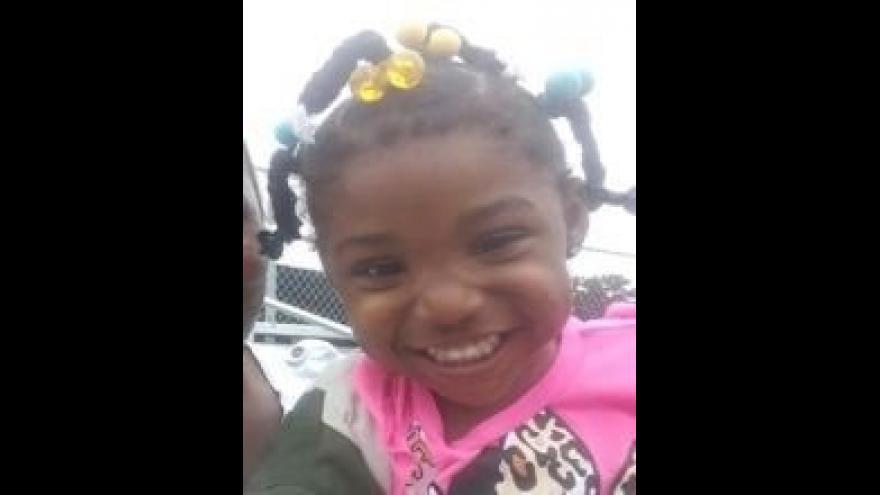 A person of interest is in custody after an Amber Alert was issued for a 3-year-old girl who was last seen at a birthday party in Birmingham, Alabama, police said. Kamille "Cupcake" McKinney was last seen Saturday, said Sgt. Rodarius Mauldin with the Birmingham police.

Two people are being questioned in the disappearance of Kamille "Cupcake" McKinney, Smith said at a news conference.

Smith said there does not appear to be any connection between the two people and the girl's parents.

The chief said police found a Toyota Sequoia with beige trim that investigators think may have been used in the girl's disappearance. Earlier, police said they were looking for a Toyota 4Runner.

"Unfortunately, investigators have not received any information on the location of Kamille," Smith said.

Alabama Gov. Kay Ivey released a statement Monday saying she was working with Jefferson County District Attorney Danny Carr to offer a $5,000 to anyone with information on Kamille.

"I am staying engaged with law enforcement officials on both the state and local levels," Ivey's statement read. "While the search for Kamille and the investigation into the case are ongoing, it is imperative that we remain vigilant and report any information that may help law enforcement bring her home."

Kamille is 3 feet tall, weighs 60 pounds and has brown eyes and black hair, according to the Amber Alert. She was last seen wearing a pink T-shirt with a Minnie Mouse leopard print design, leopard print shorts and yellow, white and blue hair bows, the alert said.

Witnesses told police a woman in a dark-colored SUV left the party with Kamille, according to a news release from Birmingham police.

"It was something I came up with," McKinney said. "When she came out, she was all cute and red with little brown eyes and I said, 'That's my cupcake.'"

Anyone with information on Kamille's disappearance is asked to call the Birmingham Police at 205-254-1757.

"We're going to stay committed to locating this 3-year-old baby. It's something that affects not just one community, one part of town; this affects the entire city, it affects the state, and I think everyone wants to see this young baby found, and back home," Smith said.