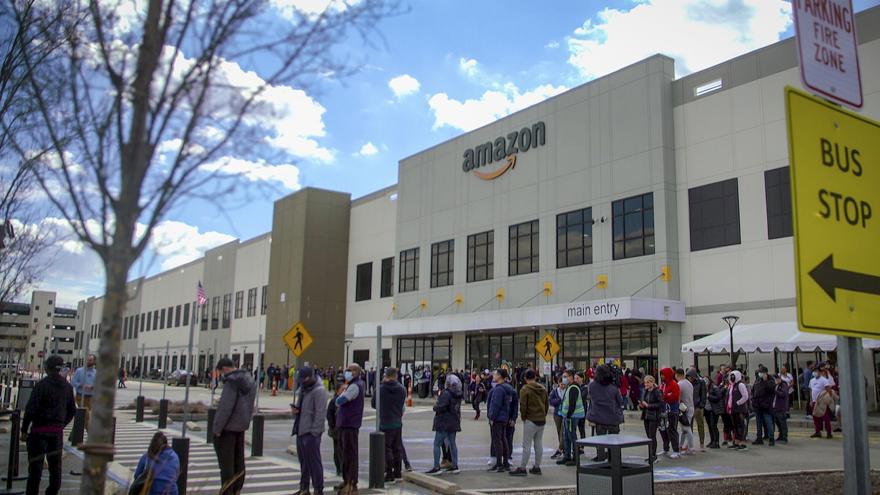 (CNN) -- Amazon warehouse workers at a facility in New York City have voted to form the first US union in the tech giant's 27-year history, marking a stunning victory for a bootstrapped effort led by a fired employee.

In a closely watched election, workers at a Staten Island, New York, facility known as JFK8voted in favor of forming a union with a newly-established organization called Amazon Labor Union (ALU), which was started by current and former warehouse employees.

There were 2,654 votes in favor of unionizing and 2,131 votes against it by the end of the second and final day of public vote counting on Friday. Out of approximately 8,325 eligible voters, 4,785 votes were counted and another 67 were challenged. Seventeen ballots were voided.

The parties have five business days to file any objections.

In a statement after the vote, Amazon indicated that it is exploring various legal channels to fight the results. "We're disappointed with the outcome of the election in Staten Island because we believe having a direct relationship with the company is best for our employees," Amazon said in the statement. "We're evaluating our options."

The staggering result could prove to be a milestone moment for Amazon and the broader labor movement in the United States. The union vote has the potential to upend how Amazon, the country's second largest private employer, engages with some members of its vast workforce. It could also add fuel to organizing both within the company's own sprawling empire, where some efforts are already underway such as at an Amazon Fresh store in Seattle, as well as at other companies across the country.

The outcome was hailed by advocacy groups, large labor unions and the White House, with press secretary Jen Psaki telling reporters Friday that President Joe Biden was "glad to see workers ensure that their voices were heard." John Logan, professor of labor and employment studies at San Francisco State University, called the ALU win a "jaw-dropping result." He added: "There really is no bigger prize for unions than winning at Amazon."

Shortly after the tally was complete, Christian Smalls, the president of ALU who is largely the face of the organization, joined a crowd of other ALU organizers and members of other labor groups that had gathered in downtown Brooklyn to celebrate the win. Sipping from a bottle of champagne and wearing pants emblazoned with the brand name "Billionaire Boys Club," Smalls gave a brief history of his contentious relationship with the company.

"Two years ago, my life changed forever," said Smalls, who was fired from his job at the facility in March 2020 after leading a walkout to protest pandemic related health and safety concerns. (Smalls says he was retaliated against; Amazon says he was terminated for violating its policy that required him to quarantine after being notified of a possible Covid-19 exposure.) "I only wanted to do the right thing and speak up for workers behind me," he said

In his speech, he also mentioned a widely reported suggestion by an Amazon executive in 2020 to disparage Smalls as "not smart or articulate." At the time, the executive said his comments were "personal and emotional," and that he'd allowed his emotions to "get the better of me."

"It's not about me. Amazon tried to make it about me from day one," Smalls said. "It's always going to be Amazon versus the people and today, the people said they wanted a union."

At the gathering, some handed out fliers that read, "Vote Yes For The Union. Despite what Amazon tells you, the union isn't some outside organization. It's a legal recognition of our right to have a say at work — as a group instead." Members of another pro-labor group held a large sign that read: "Amazon and Starbucks: Stop Union Busting! Recognize the union and negotiate now!"

The results of a separate do-over election at a facility in Bessemer, Alabama were too close to call. A total of 875 workers at the facility voted for joining a union and 993 voted against it, according to the tally, which was also conducted on Thursday. But another 416 ballots were challenged. The National Labor Relations Board expects to hold a hearing on the matter in the next few weeks to determine whether any of the challenged ballots will be opened and counted.

A bootstrapped push succeeds while an established union stumbled

Both union efforts were borne out of worker frustrations with Amazon's treatment of workers amid the pandemic and were also motivated in part by increased national attention to racial justice issues and labor rights. But there are key differences between the two.

The Alabama effort was done in coordination with the Retail, Wholesale and Department Store Union (RWDSU), an 85-year-old labor union, which has organized tens of thousands of workers. By contrast, the Staten Island push is not aligned with an existing labor union but rather is trying to create its own.

Smalls previously told CNN Business that ALU is running on "pennies compared to other campaigns," garnering $100,000 in donations raised through pages on GoFundMe, a crowdfunding platform.

He has sought to differentiate his organizing effort from the one in Bessemer, stating that having an independent union led by current and former employees of the facility "was working and resonated with the workers." (ALU has also garnered enough signatures for an NLRB election at a nearby Amazon facility in Staten Island later this month.)

The two union pushes are also unfolding in two very different parts of the country. The RWDSU drive occurred in Alabama, a right-to-work state, where union membership is low. New York, on the other hand, has the second highest union membership in the nation. Amazon's starting wage for workers of at least $15 an hour also fares differently in Alabama where the minimum wage is $7.25, compared to New York City's $15.

"They're enormously important elections. [Amazon] is a company that is not just retail, it is not just logistics, it cuts across almost every sector of the economy," Logan said.

"I think lots of pro-union Amazon workers will take inspiration from this. There's nothing exceptional about Staten Island to suggest that you can win at Amazon there but not somewhere else," Logan said, "All of a sudden, organizing at Amazon no longer seems futile."

Logan credits the initial RWDSU Bessemer drive one year ago, which was celebrated by a number of celebrities and politicians alike, with broadly creating "energy and enthusiasm amongst young people interested in organizing themselves." While the results of that election favored Amazon, a do-over was called for after the company was deemed to have illegally interfered. (An Amazon spokesperson called the decision "disappointing" at the time.)

Labor experts have repeatedly said that organizing Amazon workers is an incredibly difficult task given current labor law and the company's opposition to such efforts. Amazon's anti-union campaigns included signage inside its warehouses, text messages, and meetings that workers were required to attend before the election periods kicked off.

"In both cases, it's a David and Goliath situation. They're up against a very powerful, determined opponent," Ruth Milkman, a labor sociologist at City University of New York, previously told CNN Business. "In both cases, it's a very heavy lift because of Amazon's resources and determination to stamp out any unionization efforts."

Amazon has previously said its "employees have always had the choice of whether or not to join a union" and that it is focused on "working directly with our team to make Amazon a great place to work."

For more on the biggest and most important technology companies of our time, watch Land of the Giants: Titans of Tech on CNN+. This exclusive new series investigates the complicated history and meteoric rise of Meta (formerly Facebook), Apple, Amazon, Netflix and Google.