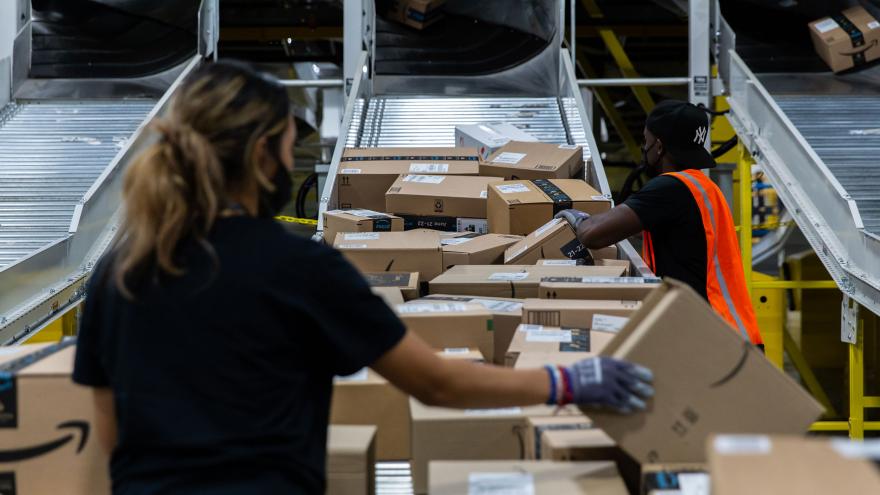 (CNN) -- Amazon plans to hire 125,000 permanent warehouse and logistics workers in the United States ahead of the holiday shopping stretch, pledging higher wages, new benefits and sign-on bonuses for some of the jobs to draw staff in a tight labor market.

Amazon said Tuesday that these jobs offer an average starting wage of more than $18 an hour — higher than its $15 minimum wage — and some of the roles include up to $3,000 sign-on bonuses. Amazon last week said it would begin offering to pay four-year college tuition for most of its workers, joining Walmart and Target in offering similar benefits.

Many retailers and logistics companies are struggling to find workers and have raised their pay and expanded benefits in response to the staffing crunch. In July, there were 879,000 unfilled jobs in the retail industry and 222,000 in the transportation and warehouse industry, according to the latest data from the Bureau of Labor Statistics.

"It's a very competitive labor market out there. And certainly, the biggest contributor to inflationary pressures that we're seeing in the business," said Brian Olsavsky, Amazon's chief financial officer, in July. "We're spending a lot of money on signing and incentives."

Companies are expecting strong demand this holiday and staffing up entering the holidays. Retail sales this holiday season will increase by up to 9% from last year, while e-commerce sales will grow by up to 15%, Deloitte said in a forecast released Tuesday.

Amazon and Walmart are hiring permanent employees ahead of the holidays, while UPS, Kohl's, Michaels and others are bringing on temporary staff. Amazon has not announced plans for seasonal workers, but last year added 100,000 temporary workers.

Amazon's business has surged during the pandemic as many shoppers, spending more time at home, increased their online purchases. The company has added more than 450,000 workers in the United States since the beginning of the pandemic and now has 950,000 US workers.

In another sign of its growth, Amazon said Tuesday it will open more than 100 new facilities in September to pack and ship goods to customers, including regional air hubs for its growing fleet of cargo jets. Amazon has opened more than 250 facilities this year.