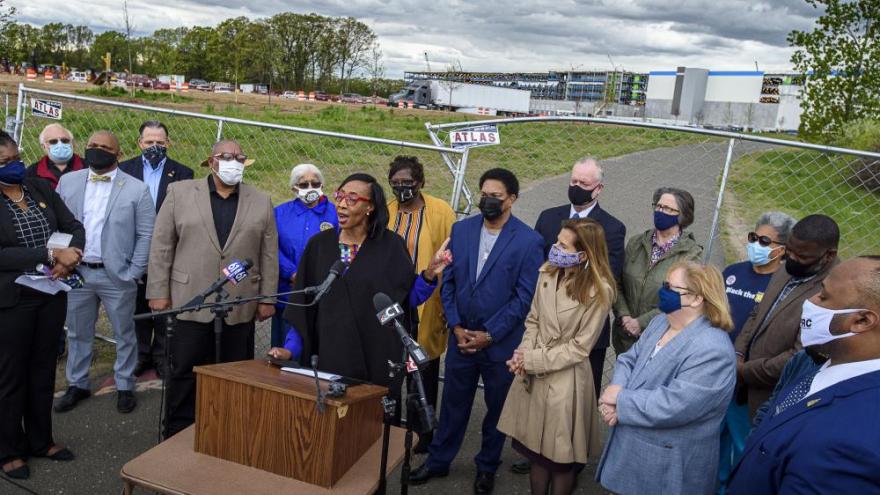 Amazon has temporarily shut down the construction of a new fulfillment center in Connecticut after the discovery of seven apparent nooses at the site.

(CNN) -- Amazon has temporarily shut down construction of a new fulfillment center in Connecticut after the discovery of seven apparent nooses at the site.

Police in Windsor, Connecticut, say the nooses were found placed around the construction site starting on April 27. The police department said it is investigating the incidents as potential hate crimes along with the FBI's civil rights division.

The company will temporarily shut down the site "at least until Monday" until more safety precautions can be put in place, Amazon representative Brad Griggs said during a press conference at the site on Thursday.

Amazon and its development partners are offering a $100,000 reward to anyone who can assist in identifying any perpetrator.

"Hate, racism, and discrimination have no place in our society, and certainly are not tolerated in any Amazon workplace, whether under construction like the building here behind us, or in our fully operational facilities," Griggs said.

First noose found in area not covered by cameras

The first noose was reported on April 27. It was hanging from a steel beam in an area "accessible to hundreds of employees from various companies," and not covered by surveillance cameras, Windsor police said in a press release, adding that the site safety team "documented the incident, removed and discarded the noose."

After the discovery of the first apparent noose, the site's general contractor RC Anderson held a safety meeting and discrimination awareness training for all employees on-site the next day, according to Windsor police.

On April 29, detectives returned to the construction site and found "five additional ropes that could be interpreted as nooses" placed on different floors of the building, police said. On May 19, police officers discovered another apparent noose hanging from overhead beams on the site.

There have been "no other messages, markings or other forms of communication in or around the facility that would provide information as to any intent or target of these nooses," the Windsor Police Department said in a press release on April 29.

"We stand united in condemning these acts that are hateful and intolerant," according to a statement released Thursday from Windsor police. "Nooses are hateful and are intended to inflict emotional pain to persons of color. We stand with all of our residents to strengthen Windsor's inclusiveness (where) every person is welcomed and valued."

A 55-year-old Black foreman who worked at the construction site for a couple months said workers there have experienced racist incidents before.

"I did witness Confederate flags on people's hats, on the back of their cars. I personally heard racial remarks made (not) only towards my people, but other races as well," Carlos Best said at the press conference Thursday. "And I would like to say it was a daily thing out here on the job that you had to deal with."

"We're not here to play games. The NAACP, once again, was founded in 1909 to stop the lynchings that were going on in the South. And we will continue to fight against these symbols of terrorism and individuals that want to hurt and harm our people," said Scot X Esdaile, president of the Connecticut NAACP, at Thursday's press conference.

Nooses have long symbolized America's horrifying history of lynchings. The discoveries in Windsor join a spate of other recent incidents from coast to coast, including the widely publicized discovery of a noose in the garage stall of Bubba Wallace, the only Black driver in NASCAR's top circuit.

No suspects or persons of interest regarding the Windsor incident have been announced as of Saturday.