Amazon near tipping point of shifting from rainforest to savannah, study suggests 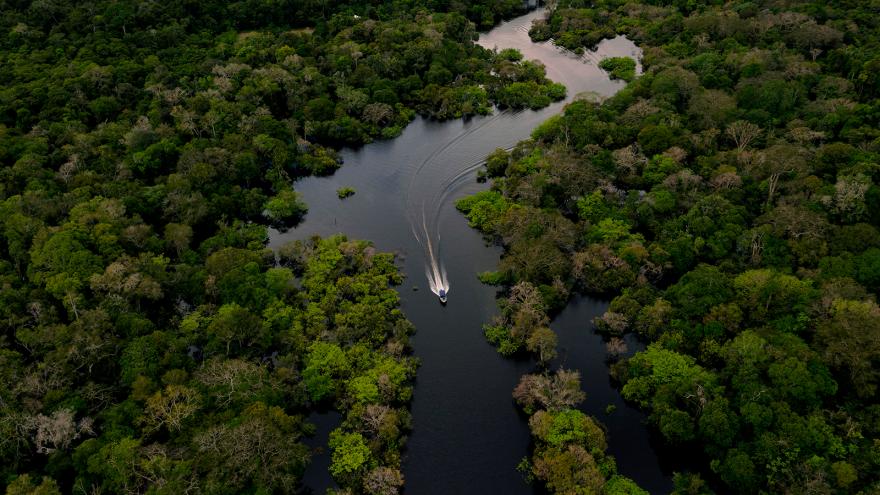 (CNN) -- The Amazon rainforest may be nearing a critical tipping point that could see the biologically rich and diverse ecosystem transformed into a grassy savannah.

The fate of the rainforest is crucial to the health of the planet because it is home to a unique array of animal and plant life, stores a huge amount of carbon and strongly influences global weather patterns.

Scientists say that about three quarters of the rainforest is showing signs of "resilience loss" -- a reduced ability to recover from disturbances like droughts, logging and fires. Their study is based on month-to-month observations of satellite data from the past 20 years that has mapped the biomass (the area's organic material ) and the greenness of the forest to show how it has changed in response to fluctuating weather conditions.

This decreasing resilience since the early 2000s is a warning sign of irreversible decline, the authors said. While it isn't possible to tell exactly when the transition from rainforest to savannah might happen, once it was obvious, it would be too late to stop.

"It's worth reminding ourselves that if it gets to that tipping point and we commit to losing the Amazon rainforest, then we get a significant feedback to global climate change," Timothy M. Lenton, one of the authors of a new study and a director of the Global Systems Institute at the University of Exeter in the United Kingdom, told a news briefing.

"We lose about 90 billion tons of carbon dioxide mostly in the trees but also the soil (of the Amazon)," Lenton said.

If the Amazon is no longer a rainforest, it won't store as much carbon.

Previous studies based on computer simulations have reached similar conclusions about an ecological point of no return for the Amazon rainforest -- but the authors said their research, published in Nature Climate Change on Monday, used real world observations.

Once we reach the tipping point, the authors said the rainforest could disappear fairly quickly. "My hunch, for what it's worth, (is that)it could happen in the space of decades," Lenton said.

Chantelle Burton, a senior climate scientist at the Met Office Hadley Centre in the UK, said that there had been a question mark over how the Amazon rainforest would stand up to the challenges of climate change, land-use change and fires. She said this new study was "really important."

"What this study does is offer some observational-based evidence for what is already happening to this significant carbon sink, and shows that human land-use and changes to weather and climate patterns are already driving an important change in the system," Burton, who wasn't involved in the research, told the Science Media Centre in London.

"Passing a tipping point of this kind would make it even more difficult to achieve our goal of Net Zero emissions globally because of the loss of the "free service" provided by the Amazon carbon sink which currently removes some of our emissions."

Richard Allan, a professor of climate science at the University of Reading, said the study was a "a comprehensive and rigorous assessment of the durability of the Amazon."

"It reaches the tantalising conclusion that much of the Amazon is showing signs that it may be approaching a tipping point towards irreversible decline; but because multiple satellite sensors are used to infer the 'lushness' of the vegetation, we need to be sure those data records are showing accurate trends," Allan was quoted by the SMC statement as saying.

"In any case, it is undeniable that human activities are waging a war of attrition from multiple sides against the natural world, though thankfully in this case the solutions are known: to cease deforestation while rapidly and massively cutting greenhouse gas emissions."