Almost 40% of Americans want a third political party, even if they don't like the candidates 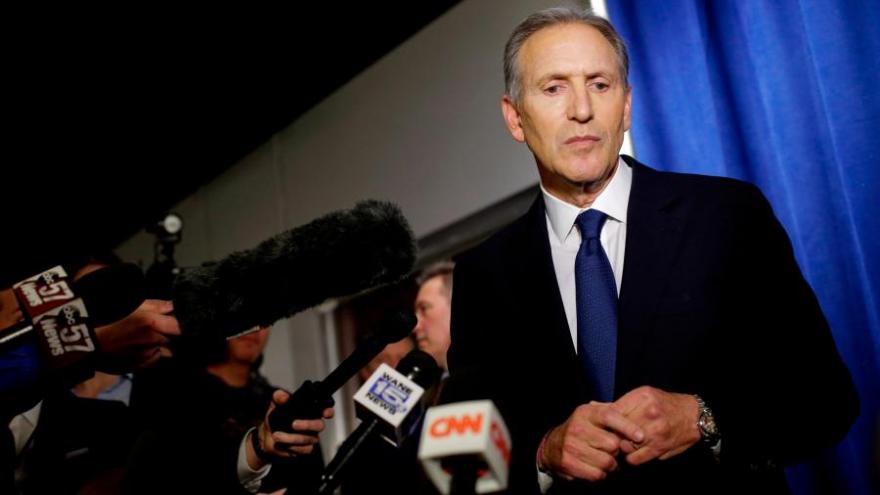 Former Starbucks CEO Howard Schultz at a news conference on February 7, 2019, in West Lafayette, Indiana. Schultz is considering running as an independent presidential candidate for the 2020 election.

(CNN) -- Even if they're down on the independent candidates being presented to them, nearly 40% of Americans think a third political party is needed to fix the political system and another 47% think it needs improvements, according to a new poll.

A NBC/WSJ poll out Sunday shows 38% of respondents think the two-party system is seriously broken and the country needs a third party, the highest number who have said so since NBC/WSJ started tracking the question in 1995. The poll shows only 1 in 10 adults agree that the two-party system works fairly well.

Independents were the most likely to have said the two-party system is broken and a third party is needed, at 62%. Thirty-seven percent of Democrats and 31% of Republicans said the same.

The polls comes at the same time that nearly half of voters are sour on the highest-profile presidential candidate who is considering running outside of the two major political parties.

Former CEO of Starbucks Howard Schultz is discussing a run for president as a third-party candidate, calling himself a "centrist independent."

"We're living at a most fragile time," Schultz said in a "60 Minutes" interview in January. "Not only the fact that this President is not qualified to be the President, but the fact that both parties are consistently not doing what's necessary on behalf of the American people and are engaged every single day in revenge politics."

However, Schultz does not seem to be tapping into the demand for a serious third party to challenge Democratic and Republican candidates. He racked up some of the worst numbers in an early February CNN poll conducted by SSRS, with 44% of respondents saying they weren't likely at all to vote for him in 2020.

The only other potential candidate who struggled as much as Schultz was former New York Mayor Michael Bloomberg -- 44% of respondents also said they weren't likely at all to vote for him in 2020.

Bloomberg and Schultz share similarities in that they are outsiders to presidential politics and are both billionaire businessmen. Similarly to Schultz, Bloomberg toyed with running as an independent candidate in the 2016 election, but ultimately decided against it. He's now considering whether to run as a moderate Democrat.

The NBC/WSJ poll was conducted Feb. 24 to Feb. 27 of 900 adults -- nearly half by cell phone -- and the overall margin of error is plus or minus 3.3 percentage points.