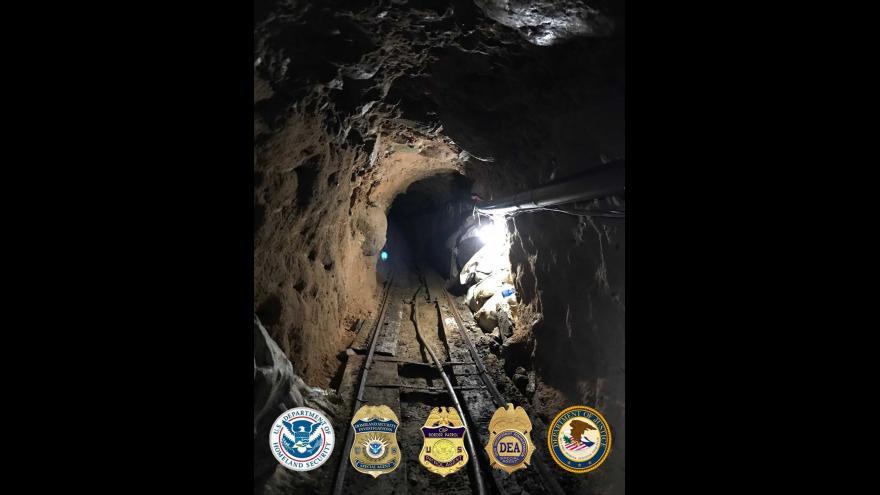 Federal agents say they tunnel had its own rail system to cart drugs under the border.

(CNN) -- Federal agents in San Diego seized about 4,400 pounds of drugs from a sophisticated smuggling tunnel that stretched into Tijuana, Mexico, authorities in California announced Tuesday.

The three-foot-wide tunnel is more than 2,000 feet long and has reinforced walls, ventilation, lighting and a rail system, according to a statement from US Immigration and Customs Enforcement. It had an average depth of 31 feet.

The tunnel linked a warehouse in the Otay Mesa section of San Diego to another in Tijuana.

Authorities found 1,300 pounds of cocaine, 86 pounds of methamphetamine, 17 pounds of heroin, 3,000 pounds of marijuana and more than two pounds of fentanyl in the tunnel, according to the statement. The drugs have a street value of $29.6 million.

"These tunnels show the determination of drug trafficking organizations to subvert our border controls and smuggle deadly drugs into our community. But these recent tunnel seizures also show the dedication of our amazing partners on the San Diego Tunnel Task Force to locate and shut down these tunnels to keep our communities safe," Drug Enforcement Administration Special Agent in Charge John W. Callery said in a statement.

"Despite the current COVID-19 pandemic, DEA employees continue to work tirelessly to serve and protect the community."

Agents estimated that the tunnel had been in use for several months, the statement said.
Two New Jersey men allegedly used droves to smuggle drugs and cell phones into a prison

It was discovered March 19 after an investigation by the San Diego Tunnel Task Force, which includes the US Immigration and Customs Enforcement's Homeland Security Investigations, US Border Patrol, the DEA and the United States Attorney's Office.