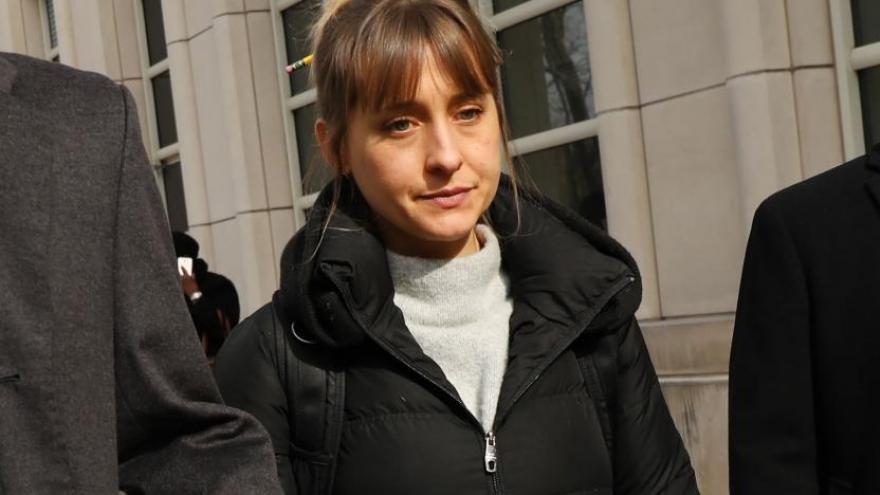 Allison Mack from the TV series "Smallville," pictured on February 6, 2019, in New York, apologized to people she hurt during her time in cult-like group Nxivm, ahead of her sentencing after she pleaded guilty to racketeering charges.

(CNN) -- Allison Mack, former "Smallville" actress and high-ranking member of the cultlike group Nxivm, was sentenced to 3 years in prison Wednesday. Mack is required to have 3 years of supervised release after serving her prison term and has to pay a $20,000 fine.

In Mack's letter, which was submitted as part of the sentencing memorandum filed Friday, she apologized to people she has harmed by her actions.

"I am sorry to those of you that I brought into Nxivm," Mack wrote. "I am sorry I ever exposed you to the nefarious and emotionally abusive schemes of a twisted man."

Mack was arrested in 2018 along with several other Nxivm leaders, including Keith Raniere, who was convicted of racketeering charges and sentenced last year to 120 years in prison. She pleaded guilty to racketeering and racketeering conspiracy charges one month before Raniere's 2019 trial was set to begin.

Sentencing guidelines recommended a range of 14-17.5 years in prison for Mack. Prosecutors had asked US District Judge Nicholas Garaufis to give her below the recommended range because of "substantial assistance" she gave the government in the investigation and prosecution of others, they said in a court filing. Mack's attorneys had asked for her to receive no prison time. CNN has reached out to Mack's attorneys for comment on the sentence.

Nxivm was a company in Albany, New York, that touted "self-help" classes. But prosecutors said within the organization, a secretive, female-only group was created that ultimately led to some women being branded with Raniere and Mack's initials and being coerced into giving compromising information, including nude photos, to the group's leaders on a regular basis.

The group, known as DOS, involved several women who were known as "first-line masters," who reported directly to Raniere and recruited other women as their slaves, according to testimony at the trial. Unbeknownst to many of the women, Raniere was the head of the group, and women were, at times, directed to have sex with him and send him nude photographs.

Mack has been under house arrest at her parents' home for the past three years, since her arrest. Her attorneys said that in the past three years, Mack has gotten her associate degree at a community college in California, enrolled at UC Berkeley for a bachelor's degree program, and worked as a caterer.

They should 'ask to be branded'

One week before Mack pleaded guilty, she began to cooperate with the government and share details about crimes committed and evidence, prosecutors said in their sentencing memo.

One piece of evidence she shared served as "crucial" evidence during Raniere's trial: a recording of a conversation between Mack and Raniere in which the two discuss a "branding ceremony."

"The person should ask to be branded," Raniere is heard saying in the audio. "And they should probably say that before they're held down, so it doesn't seem like they are being coerced."

Another high-ranking member of DOS, Lauren Salzman, who pleaded guilty to racketeering and racketeering conspiracy charges, testified that she herself was branded, and she watched another woman writhe in pain during the ceremony.

"She was squealing and screaming and it looked horrendous," Salzman testified. Salzman is expected to be sentenced July 28.

Prosecutors said were it not for Mack's cooperation, they would not have been able to present the recording of Raniere and Mack discussing the ceremony, where they discuss the design of the brand, which shows their initials KR and AM, and how women should be held down before being branded in their pelvic regions.

The need for 'responsibility and consequences'

Jessica Joan, an actress who joined Nxivm in 2016 and was ultimately recruited into DOS, testified anonymously as "Jay" during Raniere's trial, but ahead of the sentencing she decided to come forward publicly after having time to process what happened. Now, she says, she wants to take control of telling her own story, and plans give a statement in court Wednesday.

"There needs to be responsibility and consequences for her actions," Joan told CNN. "I think we all are victims of Keith one way or another. However, she totally had her own choices to make. And I know for a fact that she got pleasure in the harm that she was creating. There were a lot of things Keith told her to do but there were a lot of things she did of her own will and desire."

Joan said at Raniere's trial that after she was recruited to join DOS, she was told she would need to give monthly pieces of "collateral," or potentially damaging information, to ensure she would keep the group secret. She submitted photos that were "sexy or unattractive," as well as secrets regularly "kind of like rent ... the first of every month," she testified.

Joan testified that in 2017, Mack directed her to seduce Raniere and have him take and send a nude photo of her as proof.

Joan, a survivor of sexual abuse, was celibate at the time and said that when she pushed back on the "special assignment," Mack told her that having sex with Raniere would "help you get rid of all of your sexual abuse trauma."

Joan said in her testimony that she immediately knew she needed to get away from the group but that she was terrified about what the group would do with the damaging photos and information she'd shared with them.

"I was just thinking about all the collateral that they had on me and, like, well, what was I going to do? I needed to get out of this situation, and what are they going to do with my collateral?" she testified.

Joan said she was the first to leave DOS in 2017 and was never branded. It was a gradual process to leave the group and Albany, something she details in her forthcoming book, "The Untouchable Jessica Joan." Her latest writing project is a victim impact statement she plans to deliver Wednesday before Mack's sentencing.

"I want to tell her my truth. I want to let her know all of the pain and suffering that she caused," Joan said. "There's also an aspect of forgiveness. I can forgive but I don't forget. I do believe there needs to be personal accountability by her. I believe the judge will give a sentence that will bring justice."

Mack has 'turned her life around'

In the three years since her arrest, Mack has been working as a caterer, obtained her associate's degree at a community college in California, and enrolled in a bachelor's degree program at the University of California, Berkeley, her lawyers said in the sentencing memorandum.

"None of these things can justify Ms. Mack's past actions, or erase the harm done to the Victims," the memo read. "However, having been finally removed from Raniere's grip by these very proceedings and the unwavering support of her family and friends that they have engendered, Ms. Mack has regained the clarity she had lost as a member of Nxivm -- clarity to see past Raniere's lies and manipulations, and to understand the incalculable harm caused by the group she was a part of."

Mack's attorneys describe in a court filing her life as a child actor, how she took part in her first Nxivm class in 2007 and moved to Albany to immerse herself in the group in 2012. When DOS was formed, Mack "(wrongly) understood DOS to be an organization designed to empower women," attorneys said in their memorandum.

Mack's attorneys said in their filing that for several months after her arrest, she remained in denial about the nature of Nxivm, DOS and the intentions of Raniere, who she'd been devoted to for 10 years, but that being confined to her parents' home after her arrest for years "likely saved her life by leaving her no choice but to reintegrate into her family."

Mack acknowledges that her cooperation with the government could have been even more substantial if it had started sooner, the filing states.

In the letter of apology filed ahead of her sentencing, Mack wrote that she does not take lightly the responsibility she has for the lives she negatively impacted.

"I lied to you, again and again, in order to protect the delusion I was so deeply committed to believing," she wrote.