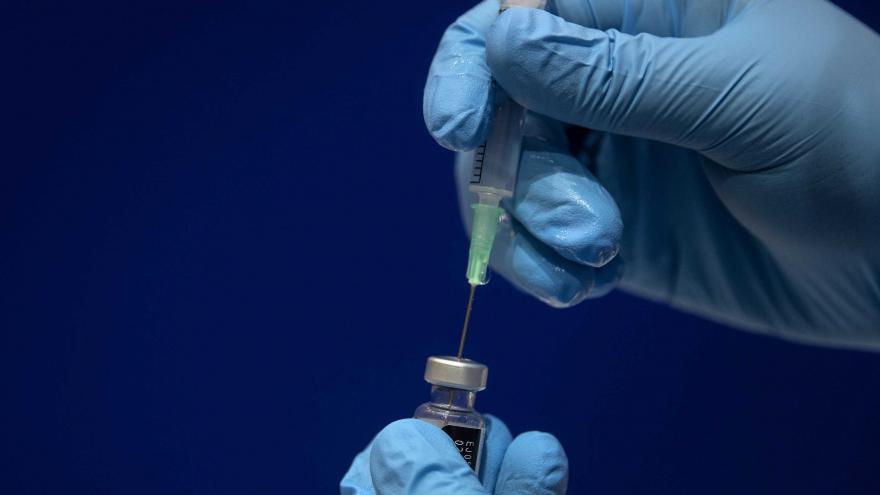 (CNN) -- People with a "significant history of allergic reactions" should not be given the Pfizer/BioNTech coronavirus vaccine, UK health authorities said Wednesday, after two healthcare workers had symptoms after receiving a shot the day before.

The precautionary advice was given after the pair "responded adversely" following their shots on the first day of the mass vaccination rollout in the UK, National Health Service England said Wednesday.

Both staff members reportedly had a significant history of allergic reactions and carried adrenaline autoinjectors, according to PA Media. Thousands overall are believed to have been vaccinated in the UK on Tuesday.

"As is common with new vaccines the MHRA [Medicines and Healthcare products Regulatory Agency] have advised on a precautionary basis that people with a significant history of allergic reactions do not receive this vaccination after two people with a history of significant allergic reactions responded adversely yesterday," said Stephen Powis, the national medical director for NHS England, in a statement. "Both are recovering well."

"Any person with a history of a significant allergic reaction to a vaccine, medicine or food (such as previous history of anaphylactoid reaction or those who have been advised to carry an adrenaline autoinjector) should not receive the Pfizer BioNTech vaccine," states the new MHRA advice, PA Media reported. It said that vaccines "should only be carried out in facilities where resuscitation measures are available."

He said that rather than a "blanket recommendation" for people with allergies, "the smarter thing to do would be to try and look at these two patients and see what specific component of the vaccine they were allergic to."

He said people should realize that there are immediate treatments for allergic reaction. "That's why you're hanging out in the doctor's office," he said, before warning that the reports of allergic reactions "will only serve as yet another way to scare people."

Saffron Cordery, deputy chief executive of NHS Providers, told Sky News on Sunday that the authorization and approval process for the Pfizer/BioNTech vaccine "has been incredibly robust." The head of Britain's medicines regulator also put out assurances on Sunday, saying the Pfizer/BioNTech shot was "as safe as any general vaccine."

US drug giant Pfizer and German company BioNTech have said there are "no serious safety concerns" over the vaccine.

The US Centers for Disease Control and Prevention typically advises telling a provider if you have "any severe, life-threatening allergies" before taking any vaccine.