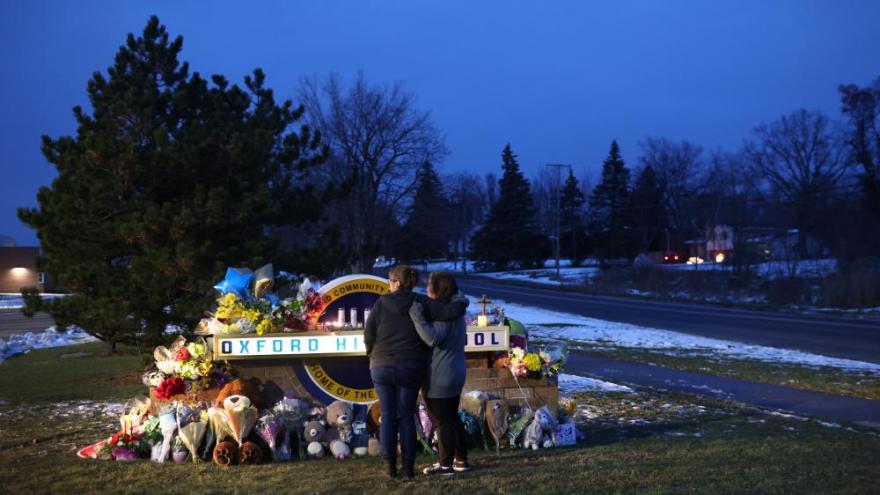 Ethan Crumbley, who is accused of killing four people in a school shooting at a Michigan high school in November, pictured here, Oxford High School on December 1, 2021 in Michigan is planning on using an insanity defense at trial, according to a court filing.

(CNN) -- Ethan Crumbley, who is accused of killing four people in a shooting at a Michigan high school in November, is planning on using an insanity defense at trial, according to a court filing.

Crumbley's defense attorneys filed a notice on Thursday saying that they plan to "assert the defense of insanity at the time of the alleged offense."

CNN has reached out to Crumbley's attorneys for comment. In a brief statement, Oakland County Chief Assistant Prosecutor David Williams said Crumbley would be evaluated by a doctor from the Center for Forensic Psychiatry.

"As expected, Ethan Crumbley's attorney has requested an evaluation of his criminal responsibility," the statement said. "This is standard procedure."

Crumbley faces 24 charges, including one count of terrorism causing death and four counts of first-degree murder, in connection with the shooting at Oxford High School, 40 miles north of downtown Detroit. Crumbley, who was 15 at the time of the shooting, is being charged as an adult.

Four students -- Madisyn Baldwin, 17; Tate Myre, 16; Hana St. Juliana, 14; and Justin Shilling, 17 -- were killed. Another six students and one teacher were wounded in the attack, the deadliest shooting on a US K-12 campus since 2018.

Prior to the shooting, teachers had reported concerning behavior from Crumbley, authorities say, including the fact he was found hours before the killings with a drawing that essentially depicted a shooting.

Crumbley's parents were arrested days after the shooting and charged with four counts each of involuntary manslaughter, as prosecutors accused them of disregarding signs their son was a threat and giving him easy access to the gun. They have pleaded not guilty.

At a hearing earlier this month, prosecutor Mark Keast outlined the state's case, alleging Crumbley's parents were negligent in addressing issues with their son well before the shooting. He allegedly texted his mother while his parents were not home, saying he saw demons or ghosts, or that he believed someone was inside the house, Keast said.

Additionally, evidence was recovered that showed Ethan Crumbley allegedly killed and tortured animals near and in his home in May 2021 and kept the severed head of a bird in a jar for over 6 months, Keast said.

The teen's notebooks also included concerning content, Keast said, including entries about how he wanted to shoot guns, shoot up a school and other dark thoughts, Keast said. Crumbley searched online for information about guns and school shootings so much that he started to get spam advertisements regarding guns and mental health, the prosecutor said.

At Crumbley's arraignment last month, the judge entered a plea of not guilty at the request of Crumbley's attorney.