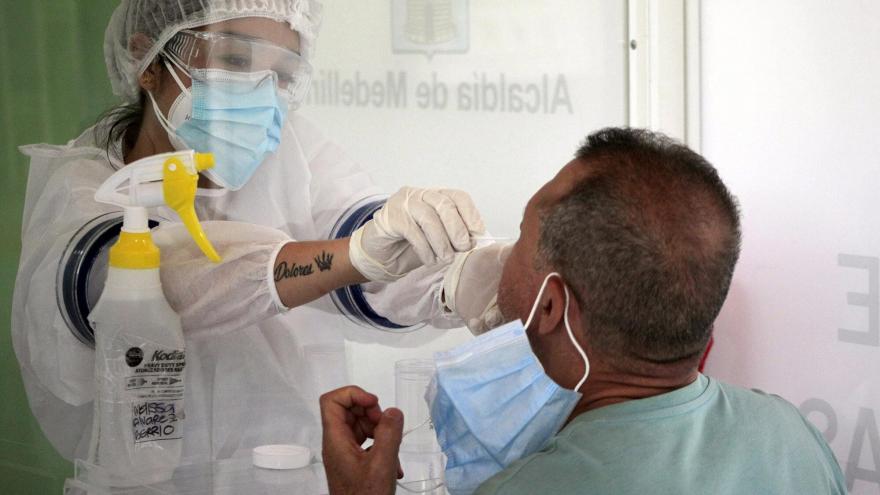 (CNN) -- The election is probably dominating your news sources, social feeds and thoughts. But the rest of the world didn't stop on Election Day.

In case you got caught up in the deluge of election news and missed some other notable headlines, here's what else happened this week, including new coronavirus records, yet another hurricane and a rare close call with one of the largest animals on Earth.

Tuesday was the fourth-highest day of Covid-19 cases in the US since the pandemic began, as the coronavirus continues to surge to disturbing new highs, according to data from Johns Hopkins University.

Public health officials have warned that the US is entering a new stage of the pandemic, where instead of cases accelerating in separate virus hot spots, cases and hospitalizations are swelling across the country.

Hospitals are reaching their breaking point, too, overwhelmed by coronavirus patients, CNN Medical Analyst Dr. Leana Wen said this week. And when hospitalizations increase, deaths are likely to follow.

"The difference between what's happening now versus what happened before is that the virus is everywhere now," Wen said. "When the virus is so widespread, we could very well ... run out of health care workers, which means that patient care is going to suffer."

Also, on the coronavirus note, Kardashian sister Kendall Jenner was slammed online for hosting a widely attended birthday party over the weekend -- with very few masks and not much social distancing, based on videos and images from the party. Matriarch Kris Jenner defended Kendall on Tuesday, saying the family and their "closest friends are tested religiously."

Hurricane Eta makes landfall -- and may head toward the US

The 28th named storm of the Atlantic hurricane season made landfall in Nicaragua as a Category 4 storm on Tuesday -- and in the coming days, it could head toward the US Gulf Coast.

In Central America, Eta brought cataclysmic flooding that could last for days, according to the US National Hurricane Center. The storm, which had maximum sustained winds near 140 mph at the time it made landfall, ripped roofs from homes and downed power lines and trees in Nicaragua.

Eta, which weakened to a Category 1 storm early Wednesday, is forecast to travel northwest through Honduras and Guatemala before turning to head northeast toward Cuba and South Florida on Sunday. The storm will likely weaken as it travels across Central America, but its intensity later in the week isn't yet clear.

Four people are killed in Vienna in terror attacks

At least four people were killed and another 22 were injured in terror attacks across Vienna, the capital of Austria, earlier this week. One gunman opened fire in six locations across Vienna, Austrian chancellor Sebastian Kurz told CNN.

ISIS claimed responsibility for the attack, and Kurz said that the gunman had expressed support for the Islamic State. Fejzulai Kujtim, a 20-year-old Austrian man, had previously been sentenced in 2019 for attempting to travel to Syria to join ISIS.

Austrian authorities have arrested 14 people in connection with the shootings, Kurz said. While officials believe the gunman acted alone, Kurz said it's not yet clear whether he's part of a broader terror network.

Rescuers save a 2-year-old girl in Turkey earthquake rubble

A 2-year-old girl was pulled from the rubble in the Turkish city of Izmir several days after a devastating earthquake struck.

Rescuers who found Ayda Gezgin heard her scream and located her in the wreckage of a collapsed building. She was able to wave her hand when rescuers asked her to, and she appeared alert and responsive at the scene. She's now receiving treatment at a hospital, national media in Turkey reported.

"We started her on IV fluids, but she is doing really well. She is conscious; she has no open wounds," a member of Turkey's National Medical Rescue Team (UMKE) told national broadcaster TRT.

Ayda was found next to a dishwasher that likely shielded her from the impact of the quake, rescuers said. Ayda's mother's body was found a few hours after Ayda's rescue, one of at least 105 people who died during the 7.0-magnitude quake, which struck the Aegean Sea on Friday. Another 1,027 people in Turkey were injured.

Soccer great (or football great, for everyone outside of the US) Diego Maradona is recovering from surgery for a blood clot on his brain. Maradona, who turned 60 last week, was admitted to an Argentinian hospital on Monday as a preventive measure due to a "low mood," his doctor told reporters.

But tests revealed he had a subdural hematoma, considered one of the deadliest head injuries by the US National Library of Medicine.

Despite the severity, Maradona's doctor called the procedure to address the blood clot a "routine surgery."

"Diego tolerated the surgery very well," Maradona's personal doctor, Leopoldo Luque, said in a statement Tuesday. "He is awake. Everything is fine."

The World Cup winner, widely considered one of the best players in the sport, is currently the head coach of the professional Argentinian sports club Gimnasia y Esgrima de La Plata.

Brady, 43, threw two touchdowns in a contentious game against the New York Giants. The Buccaneers narrowly defeated the Giants by just two points -- and Brady got his record back. After the game, he thanked teammates Rob Gronkowski and Mike Evans for their teamwork.

Two whale watchers narrowly missed the open mouth of a humpback whale as it leapt out of the water this week.

Julie McSorley and Liz Cottriel were watching whales from their kayaks off the coast of California's Avila Beach when a humpback swam underneath them and caused them to capsize.

But the whale didn't land on the pair, and they managed to escape unscathed after briefly going underwater. Humpback don't typically harm humans, anyway -- they eat krill and small fish, and it's not unusual for them to leap out of the water and slap its surface.