All the Beijing snow is human-made -- a resource-intensive, 'dangerous' trend as planet warms 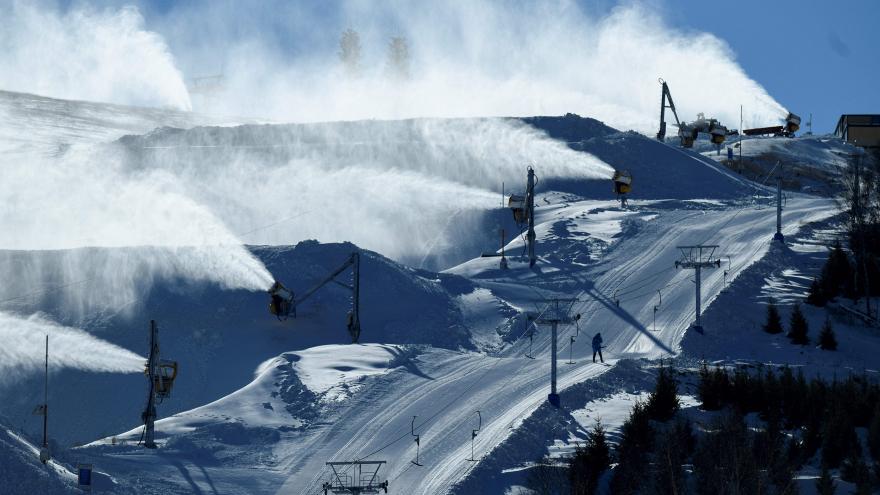 By Derek Van Dam, (CNN) -- It would be hard to hold a conversation over the deafening sound of the

It is almost beautiful -- except that the venues are surrounded by an endless brown, dry landscape completely devoid of snow.

In an Olympic first, though not an achievement to boast about, climate variability has forced the Winter Games to be virtually 100% reliant on artificial snow -- part of a trend that is taking place across winter sports venues around the world.

Just one of the 21 cities that have hosted the Winter Olympics in the past 50 years will have a climate suitable for winter sports by the end of the century, a recent study found, if fossil fuel emissions remain unchecked.

As the planet warms and the weather becomes increasingly more erratic, natural snow is becoming less reliable for winter sports, which forces venues to lean more on artificial snow.

But it comes at a cost: human-made snow is incredibly resource-intensive, requiring massive amounts of energy and water to produce in a climate that's getting warmer and warmer. Elite athletes also say that the sports themselves become trickier and less safe when human-made snow is involved.

No snow? Fake it

The region surrounding the outdoor Olympic venues is in an extreme drought this winter, but even in normal years, it isn't particularly suitable for snow sports. The average annual snowfall in Yanqing (where the Alpine slopes are) and Zhangjiakou (where many of the other events are held, including the biathlon) is roughly 20 centimeters (7.8 inches), although higher snow years have been recorded.

Italy-based TechnoAlpin was tapped to manufacture the snow required to cover the four outdoor event spaces around Beijing -- a monumental task considering the elite clientele that will zoom across its product.

"We are very proud to say that we are the only company providing the snow-making systems for the Beijing 2022 Winter Olympics," Michael Mayr, TechnoAlpin Asia area manager, told CNN.

Mayr said it is the first time a single company has been tasked with providing all the snow for the Winter Games.

But there's a critical component to making snow that some of the Beijing sites also lack: temperatures cold enough to freeze water.

In Beijing itself, which will host a few outdoor events, nearly all February days for the past 30 years have been above freezing, according to a recent Slippery Slopes report led by Loughborough University in London on how the climate crisis is affecting the Winter Olympics.

Yanqing and Zhangjiakou, which are higher elevation venues, are cooler, with average high temperatures that peak above freezing and lows that fall to around -10 degrees Celsius at night.

"There have been recent technological advances that allow for the generation of snow when it is above freezing," explained Jordy Hendrikx, the director of the Snow and Avalanche Laboratory at Montana State University. "This is not your 'light fluffy' snow that you might think of -- it is much denser and not very soft."

Traditionally, snow-making has relied heavily on snow guns and temperatures at or below freezing. To accommodate warmer temperatures and lower elevations, a different approach needs to be taken.

To work around Mother Nature, TechnoAlpin told CNN that it began shipping a full arsenal of snow guns, fan-driven snow generators and cooling towers to Beijing in 2018. Among those machines was a new piece of technology used at a training center for China's athletes: the SnowFactory.

"Think of it like a very sophisticated version of the ice maker in your refrigerator," said Hendrikx. "But then on steroids."

"Obviously we need more energy the warmer it gets," Mayr said.

And with 1.2 million cubic meters of snow needed to cover roughly 800,000 square meters of competition area, according to the Slippery Slopes report, the water demand at this year's Winter Olympics is massive.

The International Olympic Committee estimated that 49 million gallons of water will be needed to produce snow for The Games, which is a lot when you consider how rapidly the world is running out of freshwater. It's enough to fill 3,600 average-sized backyard swimming pools, or -- more to the point -- it's a day's worth of drinking water for nearly 100 million people.

Athletes have also expressed concern about the hazards of competing at high levels on artificial snow.

French cross-country skier Clement Parisse, the bronze medal winner at the 2018 Pyeongchang Olympics, told CNN that while it's not uncommon to have to compete on human-made snow, it tends to become very slick and icy, which presents added challenges.

And Laura Donaldson, a freestyle skier from Scotland who competed in Salt Lake City in 2002, was extremely critical of artificial snow.

"If freestyle super pipes are formed from snow-making machines in a poor season, the walls of the pipe are solid, vertical ice and the pipe floor is solid ice," Donaldson told researchers for the Slippery Slopes report. "This is dangerous for athletes, some have died."

The IOC does not face these challenges alone. Artificial snow is being used as a tool to extend ski seasons in competitions and at resorts across the globe, many of which are threatened by the warming temperatures of the climate crisis.

These challenges will continue to drive the snow sports industry toward artificial snow when Mother Nature doesn't produce it.

But the question remains -- just because we can, does that mean we should?