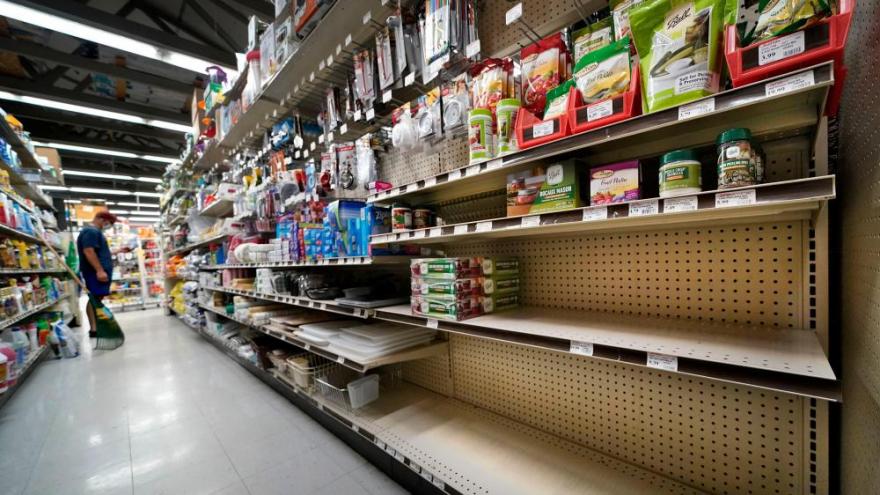 (CNN) -- The increase in the number of people cooking and trying recipes during the pandemic has led to a surge in canning -- because experienced canners are doing it more and novices want to give it a try.

And that surge has led to a shortage in Mason jars and lids.

"There's so many more people canning this year than have ever canned. We have seen a big upswing in new people trying to can," said Nellie Oehler, the coordinator for Oregon's statewide food preservation hotline, who added she's been answering lots of calls from around the nation about the lack of supply.

Marie Bregg, the owner of Mason Jar Merchant, an online retailer, said she started seeing a huge increase in demand in the middle of August.

"Our sales basically went up 600% that week and haven't dropped since," she said.

Most of the demand is for the two-part lids necessary for canning, because they are single-use, whereas the glass jars can be used over and over. The lids have a disc that sits on the mouth of the jar with a ring that screws on around it, but after one use, the seal around the disc breaks down and can't safely be used again.

The reasons behind the shortage

Bregg and Oehler said they attribute the demand to the amount of extra time people had at home since the pandemic started. And people who haven't canned very much, or at all, are getting in on the trend.

"I call it 'Sourdough 2.0' -- it was the next craze of what people are doing in the kitchen because they have extra time," Bregg said. Back in the spring, baking sourdough bread was all the rage as everyone exercised new cooking skills -- and for a long while, it caused a shortage of yeast.

During lockdown, people also planted bigger gardens than they normally would have and then had to figure out how to preserve what they grew.

The boom in gardening "meant that people for the first time are going to have either their first-time crops or bigger crops than they've had before. They're going to have to do something with it," said Joel MacCharles, who writes about canning and co-founded the website Well Preserved.

What this has meant for suppliers

Those are the same reasons given by Newell Brands, which manufactures the leading brands of canning jars like Ball and Kerr.

"Consumers staying home over the last few months due to the COVID-19 pandemic has resulted in shifts in demand for food storage containers like Ball canning jars and lids," a company spokesperson said in a statement.

"As more consumers prepare their meals at home, Ball brand canning products and the entire canning industry have experienced an unprecedented demand. The demand has resulted in supply constraints, extended lead times and recently limited product availability at stores and online."

Newell said it's working "rapidly" to address the supply issue.

"We have increased glass production, found additional lid manufacturers and expanded our pack out locations to replenish stock as quickly as possible," the statement said.

What canners can do

Bregg, who is based in the Pacific Northwest, said that so far, she has been able to source jars and lids from Canada to fill orders. A leading brand there, Bernardin, is also manufactured by Newell but is more widely available north of the border, Bregg said.

"I feel really bad because these people are new to canning and they're getting into it," and they can't continue because of the shortage, said Sharon Peterson, who runs the website SimplyCanning. "Their canning is done, because they don't have lids and they can't do it anymore."

So what can eager canners do until the supply picks up?

First, don't try to reuse the lids, because you'll run the risk of botulism, Oehler said. Instead, check local hardware stores and feed stores for remaining supplies, or ask friends and family whether they have new lids lying around.

And try other methods of food preserving, like dehydrating and freezing.

Because while jars and lids are in short supply, your creativity doesn't have to be.