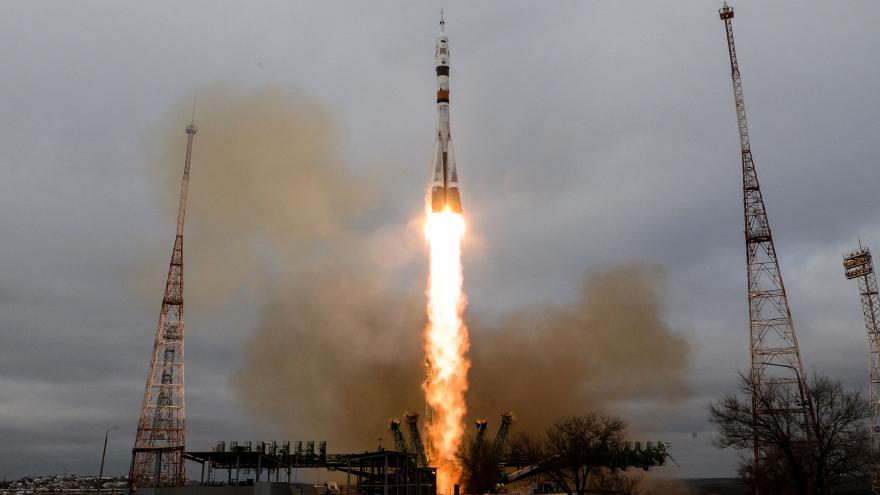 (CNN) -- A trio of Russian cosmonauts launched to the International Space Station on Friday.

Cosmonauts Oleg Artemyev, Denis Matveev and Sergey Korsakov lifted off aboard a Soyuz MS-21 spacecraft from the Baikonur Cosmodrome launch pad in Kazakhstan at 11:55 a.m. ET. The crew's launch and trip to the space station, which should take just over three hours, will be streamed live on NASA's website.

It's the first spaceflight for Matveev and Korsakov, and the trio will spend the next six and a half months aboard the space station.

The cosmonauts are expected to dock with the space station at 3:05 p.m. ET and the hatch will open at 5:30 p.m. ET, when they will be welcomed aboard the ISS by two Russian cosmonauts, four NASA astronauts and one European Space Agency astronaut.

This will bring the station's crew count to 10.

Typically, Russian Soyuz launches include two cosmonauts and at least one NASA astronaut or another international partner due to a crew swap agreement between Russian space agency Roscosmos and other agencies.

It's not the first time an all-Russian mission has occurred -- a Russian crew flew to the station in October to film the first movie in space.

Although this cosmonaut launch occurs at a time when geopolitical tensions are mounting, the absence of other nations' involvement is coincidental and based on a prior agreement between NASA and Roscosmos to a delayed crew swap for future missions in 2022.

"We still plan to work the crew swap," said Joel Montalbano, the manager of NASA's International Space Station program, during a press conference Monday. "And so we still have scheduled training for Rocosmos to come to Houston, Hawthorne and our team to go over to Star City and train for the Soyuz.

"As far as interactions with the White House -- they are aware that we're continuing these operations. We get questions from time to time, and we answered them, but today we're continuing to work those agreements."

Montalbano did not respond to a question about extending the ISS partnership with Russia to 2030.

When asked whether the current tensions on Earth have translated to the crew aboard the space station, Montalbano said, "When you're in space, there's no borders. You don't see you don't see country lines or state lines."

"The teams continue to work together. Are they aware of what's going on Earth? Absolutely. Astronauts and cosmonauts are some of the most professional groups you'll ever see. They continue to operate well, and there's really no tension with the team. This is what they've been trained to do and they're up there doing that job."

Vande Hei -- who launched to the ISS in April 2021 -- surpassed NASA astronaut Scott Kelly's record of 340 days in space on March 15, and when he lands in Kazakhstan, he will have set a new record for the amount of time a human has spent in space: 355 days.

The space agency sought to reaffirm Monday that it's still working closely with Russian space agency Rocosmos on the International Space Station, despite mounting geopolitical tensions.

Joint operations between NASA and Roscosmos at the Russian facilities at Baikonur, Kazakhstan, "continue to go well," according to Montalbano. "I can tell you for sure Mark [Vande Hei] is coming home" on the Russian Soyuz spacecraft, Montalbano said Monday. "We are in communication with our Russian colleagues, there's no fuzz on that."

NASA officials did not say there would be any significant changes to plans to get Vande Hei back to the United States after he lands. He'll travel home via a Gulfstream jet, as other US astronauts have before him.

For nearly a decade, Russia's Soyuz vehicles had been the only means of getting astronauts to and from the space station. But that reliance ended after SpaceX debuted its Crew Dragon capsule in 2020, and the US regained human spaceflight capabilities.

When Montalbano was asked by CNN's Kristin Fisher about whether NASA has contingency plans in place if the US-Russia relationship further deteriorates, he said: "The International Space Station, I'll tell you, it's been the flagship model for international cooperation. We talked earlier (about) the interdependency that we have between the US and the Russian segment. That is why we are able to operate and how we're operating...At this time there's no indication from our Russian partners that they want to do anything different. So we are planning to continue operations as we are today."