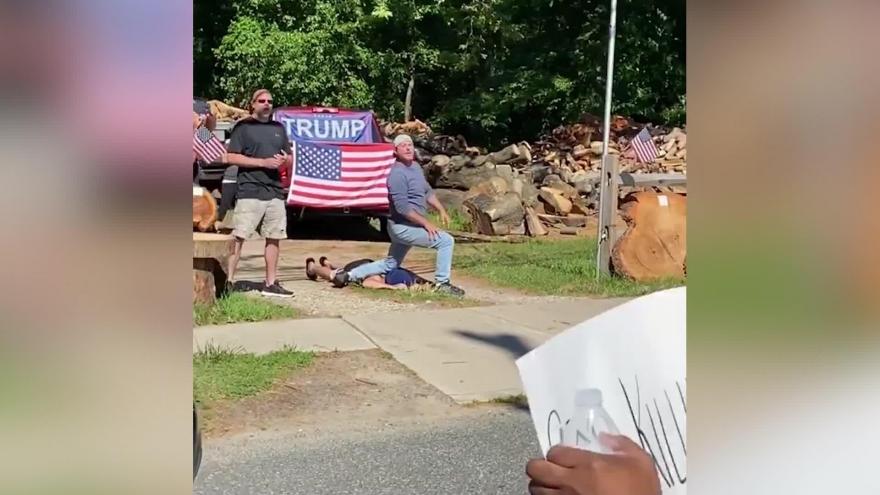 The moment was videotaped by several people from both sides of the protest and posted on social media. "Black lives matter to no one," shouts one apparent All Lives Matter protester.

The entire incident lasted one minute and 23 seconds, according to video posted to social media that CNN has obtained.

The video appears to have been taken by an All Lives Matter protester and shows what was happening before and after the Black Lives Matter march passed by.

About 20 seconds before the police cars escorting the Black Lives Matter march reach the All Lives Matter protesters, a man lies prone on the ground. Shortly after that, another man kneels on his neck, and the re-enactment of Floyd's death begins.

Other eyewitness videos, taken by Black Lives Matters marchers, pick up what happened next.

"I felt something was happening because the officers began shifting us to the opposite side of the street as we marched closer to that area," Russell Sampson, a Black Lives Matter marcher, told CNN.

Ten seconds after the escorting police cars roll by, when the marchers approach, the kneeling man starts shouting at them. "You don't comply, that's what happens," he screams, gesturing at the protesters to the person underneath him. "Look ... he didn't comply! He didn't comply. If he would have complied, that wouldn't have happened."

The organizer of the Black Lives Matter protest in Franklinville, Daryan Fennal, told CNN she was brought to tears seeing the re-enactment.

"I saw mothers trying to cover their children's eyes," she told CNN in a statement.

"Racism is everywhere, but to put it on display in such a gruesome and public way was what surprised me."

After the protesters pass by, the man taking the video then begins commenting on the Black Lives Matter marchers.

The re-enactment drew quick criticism as the videos were shared widely on social media.

New Jersey Gov. Phil Murphy condemned the behavior, saying that "mocking" Floyd's murder to, "belittle the calls for justice from our black and brown communities is repugnant."

After the videos surfaced and outrage grew online, the New Jersey Department of Corrections said it had suspended an officer it says was, "participating in the filming of a hateful and disappointing video that mocked the killing of George Floyd."

The department has also begun a "thorough and expedited" investigation into the officer.

A source familiar with the situation tells CNN the suspended officer is Joseph DeMarco, who has been employed by NJDOC for at least 18 years. The source said that after having "a conversation" with his union on Tuesday, DeMarco retained a private attorney. DeMarco was to be interviewed by NJDOC internal affairs on Wednesday morning, according to the source.

A hearing will be held after internal affairs makes their recommendation and then it will be decided whether DeMarco is suspended with or without pay, the source says.

Multiple calls by CNN to DeMarco have not been returned.

Local union President William Sullivan told CNN the union -- which represents approximately 6,000 correctional police officers in New Jersey -- was made aware of the incident around 12:30 p.m. on Tuesday after "a lot of officers called in and were upset."

"We need to continue practicing tolerance and understanding; not discrimination and hate," the union said in a statement on their Facebook page. "As a collective group, we pray for those who are hurting and we are here to help each and every one of them heal."

In a statement, FedEx said it has fired one employee it it allegedly saw in the video at the protest.

"FedEx holds its team members to a high standards of personal conduct, and we do not tolerate the kind of appalling and offensive behavior depicted in this video. The individual involved is no longer employed by FedEx. We stand with those who support justice and equality," reads the statement.

CNN continues to try to reach the former FedEx employee for comment, as well as the suspended corrections officer.

But Daryann Fennal, the Black Lives Matter organizer, says this won't take away from her efforts. She says she can't "unsee" the re-enactment and calls it scary and terrifying. "Despite the horrible incident we witnessed, I remain hopeful for the future and I hope we at least reached one person's heart yesterday," she said.