All homeless people on Los Angeles' Skid Row must be offered housing by the fall, judge orders 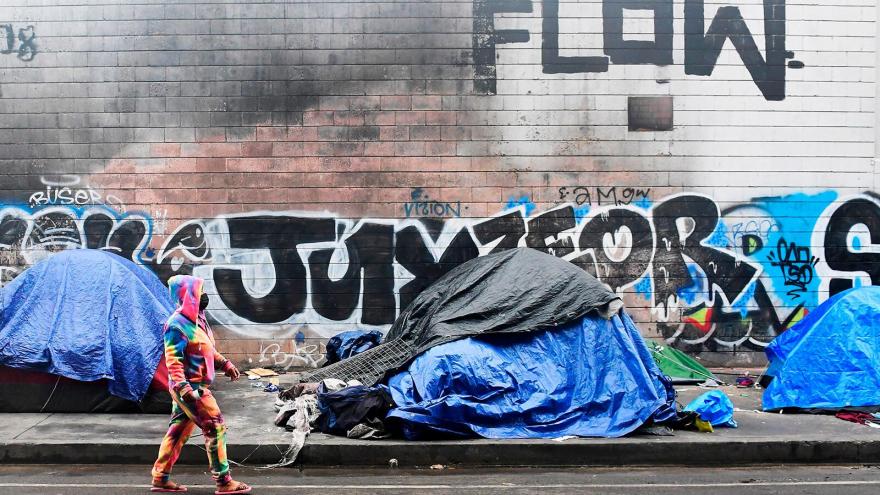 All homeless people living on Los Angeles' Skid Row must be offered housing by October 18, a federal judge ordered on April 20.

The order comes in response to a federal lawsuit filed last year by several citizens, business owners, and community leaders who argue officials have failed to address the homeless crisis in Los Angeles, as tents line full city blocks and makeshift shelters cramp under street overpasses.

"Los Angeles has lost its parks, beaches, schools, sidewalks, and highway systems due to the inaction of city and county officials who have left our homeless citizens with no other place to turn," US District Judge David Carter said in the 110-page brief.

The judge's filing follows on Los Angeles Mayor Eric Garcetti announcing his budget for the next fiscal year in which he vowed to dedicate $1 billion toward homelessness. In 2020 alone, 1,383 homeless people died, and an estimated five more die each day, according to data from the Los Angeles Homeless Services Authority (LAHSA).

The order states specific actions for the public streets of Skid Row -- home to one of the nation's biggest concentrations of homeless people.

According to the brief, city and county officials must offer and provide shelter to Skid Row's general population within 180 days, on or before October 18, 2021. Unaccompanied women and children must be offered housing within 90 days.

Calling it an "unprecedented pace," Garcetti said Tuesday he would not comment on the order before fully understanding how the judge envisions the timeline successfully happening.

Los Angeles City Attorney Mike Feuer also withheld comment on the plan. "We just received this massive order from Judge Carter," Feuer said at a press conference. "We are reviewing it as I speak today, and we'll have more to say about it in the near future, but today I will just indicate that we're still analyzing the court's ruling."

Carter's order is an urgent move to "restructure and reform" the housing needs in Los Angeles, according to the brief. The judge criticized various California officials for not "making enough effort" to fund effective solutions in a timely manner.

"Despite frequent acknowledgments of the emergency nature of homelessness in L.A., city and county efforts to address the problem continue to be mired in corruption and plagued by a lack of transparency," Carter said. "Bureaucrats create statistics trumpeting their efficiency and success to the public, but none of this has led to accountability or solutions."

While funding has increased to various housing programs and initiatives, L.A.'s homeless population is steadily increasing as well, according to data produced by LAHSA. In 2020, more than 66,000 people in the Greater Los Angeles area were experiencing homelessness. In the past year, there was a 12.7% increase in the rate of people experiencing homelessness countywide, LAHSA data shows.

Carter's order comes nearly a year after another he made addressing homelessness. In May 2020, the judge ordered Los Angeles city and county to "humanely" relocate into a shelter homeless people living near freeway overpasses, underpasses and ramps, or provide "an alternative housing option."