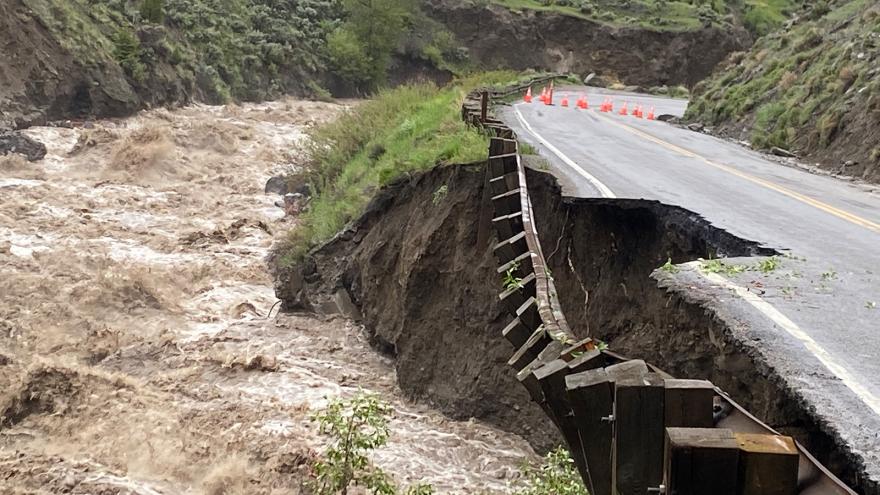 (CNN) -- Yellowstone National Park announced Monday all entrances to the park are temporarily closed due to "extremely hazardous conditions" caused by "unprecedented" rainfall and flooding.

"Effective immediately, all entrances to Yellowstone National Park are temporarily CLOSED due to substantial flooding, rockslides and mudslides on roadways from recent unprecedented amounts of rainfall and flooding," the park said in a Facebook post.

No inbound traffic is allowed "until the conditions stabilize and the park can assess damage to roads and bridges," the post added. The North, Northeast, West, South and East entrances are all closed.

"With additional rainfall forecasted, the park does not want large numbers of day-use visitors stranded in the park," the post said.

Flood levels on the Yellowstone River are "beyond record levels," the National Park Service said.

"The river has never been this high before by my house," said Elizabeth Aluck, a resident of Gardiner, Montana, which is north of the park and serves as a gateway for visitors.

As of Monday afternoon, Aluck said she was unable to evacuate because roads and bridges in the area are washed out.

Travelers with plans to visit Yellowstone National Park in the coming weeks should monitor road conditions, the park advised.

A family staying at a short-term rental house in Gardiner near the park entrance is now unable to leave their rental cabin due to flooding in the area.

Indiana couple Melissa and Parker told CNN they arrived at their rental on Saturday with their family, and expected to leave Monday morning.

"That's not happening any time soon," Parker Manning said. "The water levels were high on Saturday but within the past 10-12 hours things have gotten rougher."

Manning said they did go to the grocery store, and everyone was being smart about what to stock up on and not panicking.

"Our way out of town would be north on 89, but those roads are currently all underwater," Manning said.

The couple has no idea when they will be able to leave the town, but Manning hopes it will be within the next 48 hours.

The host of their rental was very understandable of the situation, Manning added.

Earlier Monday, the park said in a news release roads in the northern portion of the park would be temporarily closed for "an extended period of time" before posting the wider closure.

"Preliminary assessments show multiple sections of road in the park have been washed out between Gardiner and Cooke City, Montana, and multiple bridges may be affected," the release said, adding visitors in the northern portion are being evacuated.

The National Weather Service (NWS) issued a flood warning for the park on Monday and advised campers and hikers to avoid streams and creeks.

"Turn around, don't drown when encountering flooded roads," the NWS cautioned those in vehicles.