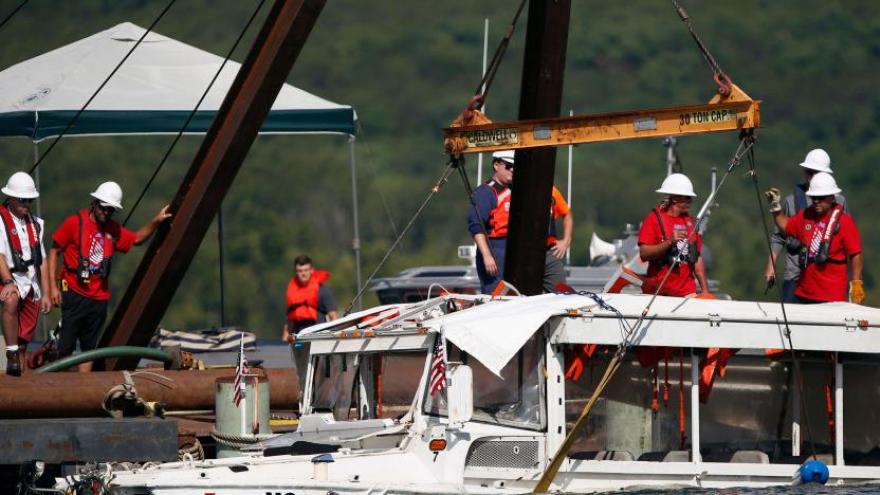 A duck boat that sank during a thunderstorm on July 19, 2018, killing 17 people on Table Rock Lake in Branson, Mo., is raised from the bottom of the lake. A Missouri circuit court judge on April 6 dismissed all criminal charges against three tour boat employees involved in the 2018 incident.

Judge Alan Blankenship wrote the court did not find probable cause the defendants acted "recklessly" or "knowingly" when they took the duck boat out onto Table Rock Lake as high winds approached.

"This court feels great sadness for this needless loss of life, and the impact on the victims' family and friends. However, because the court does not find sufficient evidence to support the mens rea or intent required for the charges at issue, as defined by Missouri law, the court dismisses each count against each defendant," he wrote.

The case was dismissed without prejudice, meaning prosecutors can retry the case.

The dismissal is the latest legal development in a case full of fits and starts.

The charges stem from the fatal sinking of a duck boat -- an amphibious vehicle that travels on land and water -- at a lake near Branson, a popular family vacation spot. Of the 31 people on board, 17 died after the boat capsized during a severe thunderstorm and high winds.

Scott McKee, the boat's captain; Curtis Lanham, the general manager of Ride the Ducks Branson; and Charles Baltzell, the manager on duty that day, were initially charged in a 47-count federal indictment. However, a federal judge dismissed those charges in December 2020 due to a jurisdiction issue and recommended the case be pursued on the state level.

In July 2021, the three men were charged in a criminal complaint in state court with a total of 63 charges, including 17 counts each of first-degree involuntary manslaughter.

In a probable cause statement, prosecutors accused McKee of wrongdoing in deciding to enter the lake during a severe thunderstorm warning and failing to follow policy by not directing passengers to put on personal flotation devices.

However, an investigation by the National Transportation Safety Board found Ride the Ducks Branson, the tour operator, and its parent company, Ripley Entertainment, were to blame for the incident because managers did not relay a severe weather forecast to the vessel's captain.

The nearly two-year-long NTSB probe found a "systemic problem with the company as a whole," an investigator said at a board meeting in 2020. The board decided against specifically naming the captain of the Stretch Duck 7 in its findings of fault.

"You can't know what you don't know," NTSB Chairman Robert Sumwalt said, noting when the vessel arrived at the shore of Table Rock Lake on July 19, 2018, "it was glassy smooth on that lake."

Judge Blankenship, citing the investigation, noted in his ruling there was no evidence McKee, Lanham or Baltzell knew of the incoming high winds.

"This has been a tragedy for all who were affected. We do not believe (any) further comment is appropriate at this time," they said.

"We respect and agree with the Court's decision," Lanham's attorney Tricia Bath added. "It has long been our position that the tragic loss of life was not the result of any criminal act by our client or anyone else. Judge Blankenship heard a great deal of evidence from both sides and rendered a decision that we believe correctly reflects the evidence in the case."