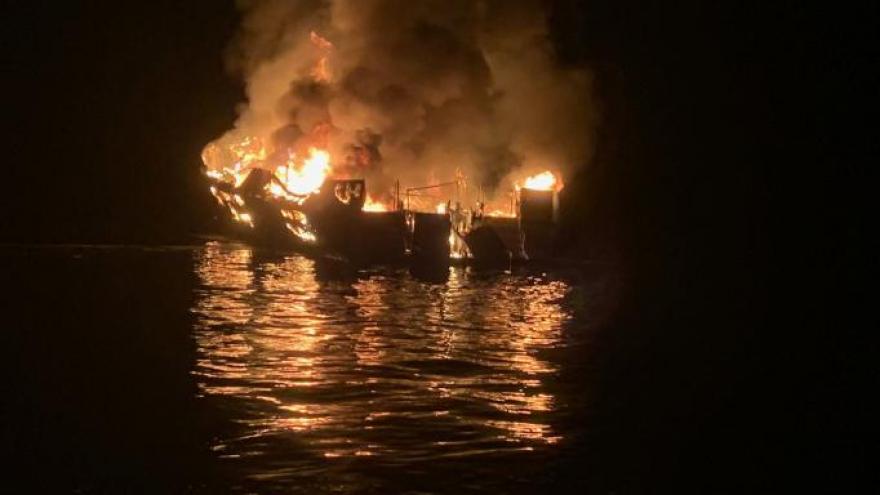 The 75' Conception, based in Santa Barbara Harbor, caught fire early 9/2 while anchored off Santa Cruz Island, multiple agencies responded. 5 people were rescued and 34 are missing.

"One had a flashlight in their hand. Another had a cell phone in their hand," Lt. Erik Raney of the Santa Barbara County Sheriff's Office said. "Some of the victims had various types of clothing on. One had a jacket. One victim had on sandals. One had some type of shoe on."

It isn't clear if they fell asleep with the cell phone and flashlight in their hands, "or maybe they were trying to escape," Raney said.

The 75-foot boat caught fire and sunk in the middle of the night Labor Day, killing 33 passengers and one crew member. Five crew members survived.

Based on the findings, there is no way to determine if the victims were trying to escape, the lieutenant said.

"We know all of the victims died from carbon monoxide poisoning. The burn damage happened after they died," said Raney.

Raney described the coroner's 34 reports as sterile, saying they contained no speculation. They did contain descriptions of the bodies and noted any clothing or items in their possession, he said.

See Also 20 dead in California dive-boat fire, report says
As each of the victims came in, forensic technicians photographed their bodies, and coroner's detectives and forensic pathologists examined them, he said.

The Conception was pulled from the water in mid-September and taken to Naval Base Ventura County in Port Hueneme.

The Bureau of Alcohol, Tobacco, Firearms and Explosives and the National Transportation Safety Board are investigating.

The Conception caught fire after 3 a.m., about 20 miles away off the coast of Southern California. It was the last day of a three-day diving trip.

By 7:20 a.m., the ship began to sink in 64 feet of water. The boat had burned down to the water line, Santa Barbara County Fire Department spokesman Mike Eliason said in the days after the tragedy. Ventura County firefighters reached the boat within 15 minutes, but it was already engulfed in flames, the fire department said.