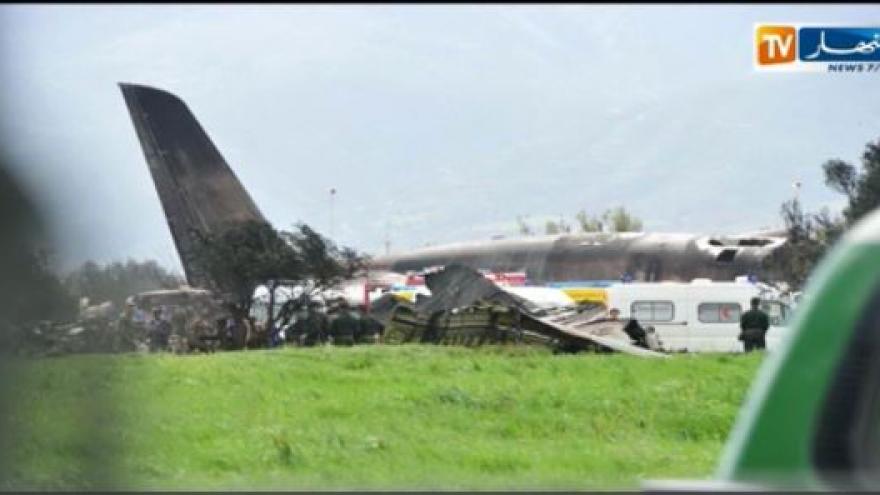 ALGIERS, Algeria (AP) — The Latest on the crash of a military plane in Algeria (all times local):

Algeria's defense ministry says 257 people have died when a military plane carrying soldiers and their families crashed soon after takeoff in a farm field in northern Algeria.

The ministry said in a statement that 247 passengers and 10 crew members were killed. It said most of the victims are soldiers and their relatives. It says the victims' bodies have been transported to the Algerian army's central hospital in the town of Ain Naadja for identification.

The crash occurred Wednesday soon after takeoff from the Boufarik air base southwest of the capital Algiers.

Algerian emergency services say 181 people have been killed in a military plane crash and some survivors have been rescued.

Civil protection agency spokesman Farouk Achour told The Associated Press that the "provisional" death toll from the crash on Wednesday is 181. He said some passengers were "extracted with deep burns caused by the fuselage catching fire."

He said more than 300 emergency workers are working at the scene.

Algerian TV network Ennahar published images of body bags lined up in a field after the crash.

The crash occurred soon after takeoff from the Boufarik air base southwest of the capital Algiers.

Algerian state radio says that more than 100 people were killed in a military plane crash southwest of the capital.

The radio report said the cause of the crash Wednesday near an air base in Boufarik remains unclear.

Emergency services have been dispatched to the site of the crash.

Boufarik is located in northern Algeria some 30 kilometers (20 miles) from the capital, Algiers.

Algeria's state news agency says that a military plane has crashed near the military base of Boufarik in Algeria.

The Algerie Presse service agency said the Ilyushin-type plane was headed for Bechar in southwest Algeria.

Emergency services have been dispatched to the site of the crash. No death toll was immediately available.

Boufarik is located in northern Algeria, near the Mediterranean sea, some 30 kilometers (20 miles) from the capital, Algiers.