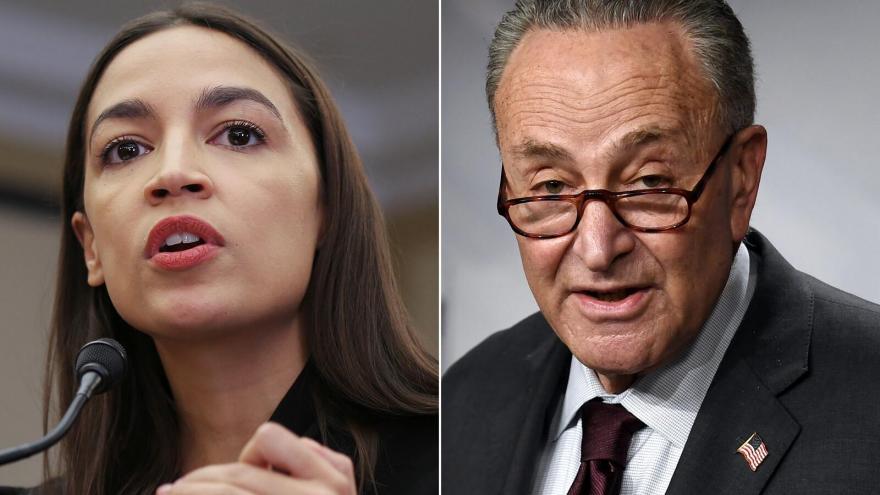 New York Rep. Alexandria Ocasio-Cortez does not know what her political future holds – and that includes whether she might challenge Senate Majority Leader Chuck Schumer in a 2022 primary.

(CNN) -- New York Rep. Alexandria Ocasio-Cortez does not know what her political future holds -- and that includes whether she might challenge Senate Majority Leader Chuck Schumer in a 2022 primary.

Asked by CNN's Dana Bash if she is considering a campaign against her fellow New Yorker next year, Ocasio-Cortez said she had not seriously considered it, but also stopped short of ruling out a run.

"And I know there's a lot of people who do not believe that. But I really -- I can't operate the way that I operate and do the things that I do in politics while trying to be aspiring to other things or calculating to other things," she said in an interview in her district in late June.

The prospect of a showdown between the New Yorkers next year has loomed over Capitol Hill for some time, but Ocasio-Cortez has not made any moves to set herself up for what would be a blockbuster campaign. And unlike other moderate congressional leaders, Schumer -- first elected in 1998 -- has steered clear of criticizing his party's left flank -- at home or in Washington. In New York, he has aligned himself closely with progressives and has on Capitol Hill, along with Massachusetts Sen. Elizabeth Warren, repeatedly called on President Joe Biden to unilaterally cancel all student debt, a top progressive priority.

But with the compromises baked into the bipartisan infrastructure deal rankling progressives, Schumer's ability to bring home, through a party-line vote, a separate and more expensive reconciliation package demanded by progressives could make or break his standing with the party's left flank.

Ocasio-Cortez noted that she and Schumer, who has never faced a serious primary challenge in part because he is so deeply attuned to his constituency, have been on the same side of some of the major legislative fights in Washington this year.

"For what it's worth, Senator Schumer and I have been working very closely on a lot of legislation and that, to me, is important," Ocasio-Cortez said. "And so, we shall see."

The second-term House member is no stranger to longshot primary bids. In 2018, she unseated then-Rep. Joe Crowley, who had been touted as House Speaker Nancy Pelosi's potential successor atop the Democratic House Caucus. Her victory touched off a string of insurgent progressive primary successes and, later on, the birth of the "squad," the all-female group of leftist congressional firebrands.

As to whether she might have ambitions that go beyond the Senate, and all the way to the White House, Ocasio-Cortez told CNN that looking that far into the future, for now at least, would compromise her ability to do her current job.

"I struggle with this because I don't want little girls watching or anything like that to lower their sights or anything in that direction. But for me, I feel that if that was in the scope of my ambition, it would chip away at my courage today," Ocasio-Cortez said. "I think what happens a lot in politics is that people are so motivated to run for certain higher office that they compromise in fighting for people today. And the idea is that if you can be as clean of a slate or as blank of a slate, that it makes it easier for you to run for higher office later on."

In the universe of Fox News villains, there are few who compete with Ocasio-Cortez.

Even before the New Yorker entered Congress for the first time, the network had become obsessed with her -- and not just because her progressive politics clashed with their right-wing agenda.

To Ocasio-Cortez -- and many others -- the reason seems to be something more "visceral."

Asked by Bash if she thought Fox was drawn to her because of her age and appearance, the 31-year-old Latina suggested that she presented the network with a unique draw.

"So much of what they're doing is so visceral, right. And their job is to get at this very visceral, reactive place in people, particularly men," Ocasio-Cortez said. "But also tap these visceral lines along race and tap along this visceral line along gender and youth."

Ocasio-Cortez is no regular Fox viewer, but did say she will occasionally tune in to get a glimpse at how the network is trying to shape the political debates and storylines.

"I actually find it to be really, really fascinating because it reveals a lot about the subconscious of folks that are crafting these narratives," she said. "And they very often are speaking to these very subconscious narratives about women or about people of color or about Latinos or Latinas -- or about working-class people."

And that, she added, speaks to something bigger than the outrage du jour.

"These caricatures that are developed are not really personal," Ocasio-Cortez said. "They are societal."

All of which makes the attacks she's bombarded with on Fox easier to withstand. More difficult to contend with, Ocasio-Cortez told CNN, was the opprobrium she sometimes faces from fellow Democrats.

"The harder one is the critiques from within the party," she said. "That's the stuff that hurts. But the right-wing stuff doesn't hurt."