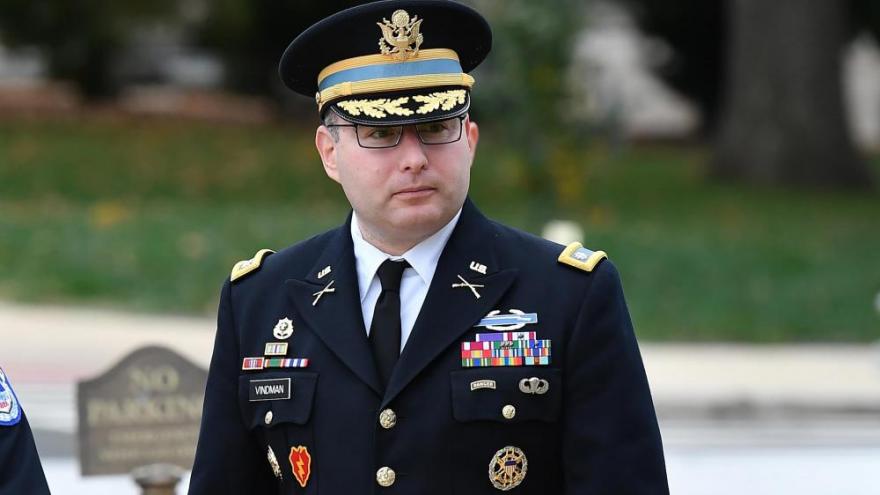 Lt. Col. Alexander Vindman plans to tell lawmakers he was so troubled by the July phone call that he reported his concerns to a superior, according to a copy of his opening statement obtained by CNN.

(CNN) -- The White House's top Ukraine expert -- who expressed concerns about President Donald Trump's phone call with the Ukraine President -- is set to appear on Tuesday before a committee leading the House impeachment inquiry as House Democrats continue to take their case to the public.

Lt. Col. Alexander Vindman, a decorated veteran who was born in Ukraine, told the House Intelligence Committee last month during a more than 10-hour closed-door deposition that he reported concerns about Trump's July 25 call with the leader of Ukraine to the top National Security Council lawyer within hours, and said some of the changes he tried to make to the since-published transcript were left out, though he didn't say why.

Vindman also told lawmakers that later, he was told not to discuss the call with anyone else.

His public hearing this week is part of a growing list of hearings the panel is holding with current and former administration officials who are tied to the matters Democrats are probing. Many of the public hearings feature individuals who have already testified before the committee, but the new, televised interviews will give Democrats a chance to bring their investigation to life as they attempt to present to the public a compelling case for the President's impeachment.

Vindman, whose testimony will occur on the same day that three other witnesses appear before the committee, was the first person to testify before the committee who was on the July 25 call between Trump and Ukrainian President Volodymyr Zelensky. During his October 29 deposition, he told the panel that one example of his attempts to change the transcript was to include Trump telling Zelensky there were tapes of former Vice President Joe Biden, which The New York Times has reported occurred where there's an ellipsis in the transcript that was released by the White House. The change was not made.

Vindman also testified that US Ambassador to the European Union Gordon Sondland told Ukrainian officials in meetings on July 10 they would have to open an investigation to secure a White House meeting, adding to a growing body of evidence that the push for Ukraine to investigate the 2016 election and Burisma, the Ukrainian natural gas company that hired Biden's son, was conditioned on a one-on-one meeting between Trump and Zelensky and the release of $400 million in US security aid that was frozen by the White House.

"On the 10th of July ... it became completely apparent what the deliverable would be in order to get a White House meeting. That deliverable was reinforced by the President," Vindman told lawmakers in his deposition last month. "The demand was, in order to get the White House meeting, they had to deliver an investigation. That became clear as time progressed from how this thing unfolded through the 10th all the way through the conclusion."

On Tuesday, Vindman's identical twin brother, Army Lt. Col. Yevgeny Vindman, a National Security Council lawyer who handles ethics issues, is expected to attend his testimony, according to a person familiar with the matter.

Last month, Vindman faced attacks by Trump and Republicans, who were seeking to discredit the aide ahead of his potentially-damaging testimony.

In a tweet on the morning of his testimony, Trump alleged that Vindman and others who have testified about him as part of the impeachment inquiry are "Never Trumpers," though there is little evidence Vindman is a political opponent of Trump's.

Since appearing before the committee, Vindman has remained in his post with the NSC, and he has no intention of leaving it, officials familiar with the matter have said.

The White House aide told Congress in his opening statement that he has "served this country in a nonpartisan manner ... with the utmost respect and professionalism for both the Republican and Democratic administrations." He noted that he has "never had direct contact or communications" with Trump.

Vindman also said in his statement that he has been a Foreign Area Office specializing in Eurasia since 2008 and that he has worked the US' embassies in Ukraine and Russia as part of that job. He also worked for the chairman of the Joint Chiefs of Staff, serving as a politico-military affairs officer for Russia.

According to his prepared remarks, Vindman — who was awarded a Purple Heart for his service in Iraq after being wounded in an IED attack and still carries shrapnel from the attack in his body, according to a source close to him — told the House committee members how his family fled to the US from the Soviet Union when he was a child.

"The privilege of serving my country is not only rooted in my military service, but also in my personal history. I sit here, as a Lieutenant Colonel in the United States Army, an immigrant," he will say, according to his remarks. "My family fled the Soviet Union when I was three and a half years old. Upon arriving in New York City in 1979, my father worked multiple jobs to support us, all the while learning English at night. He stressed to us the importance of fully integrating into our adopted country."

Vindman served multiple overseas tours, including in South Korea and Germany in addition to his deployment to Iraq, according to his prepared remarks.