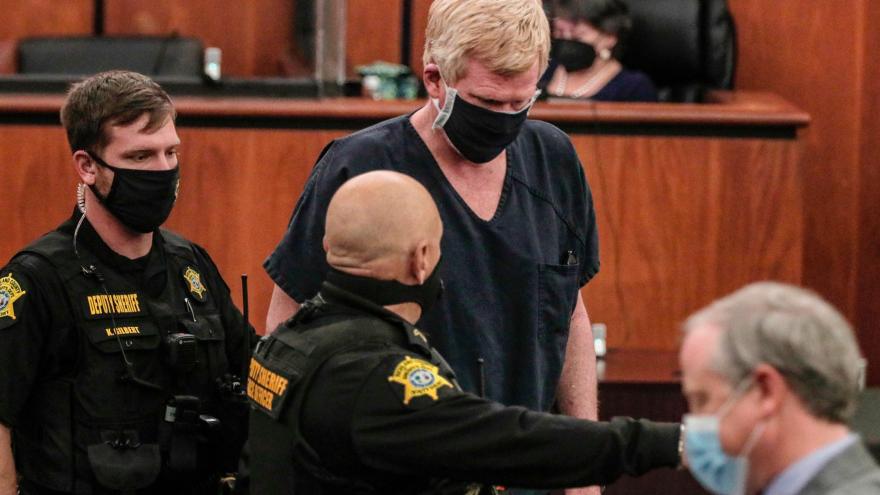 (CNN) -- Alex Murdaugh, the South Carolina attorney accused of arranging for a former client to kill him so his son could collect a life insurance payout worth millions, faces a slew of new criminal charges over alleged financial crimes.

The once-prominent attorney, in custody in Columbia for other charges, and has faced increased scrutiny since the renewed attention on the unsolved fatal shootings of his wife and other son in June and the opening of an investigation in September into the 2018 death of his housekeeper.

A bond hearing Friday for Murdaugh for 27 previous charges was delayed after the new charges were filed, said a spokesperson from the South Carolina Attorney General's office.

Judge Alison Lee wanted to give Murdaugh's attorneys time to familiarize themselves with the latest round of charges, the attorney general's office says. A new bond hearing is expected at some point next week, according to the spokesperson.

The prior charges include "Breach of Trust with Fraudulent Intent, Obtaining Property by False Pretenses, Money Laundering, Computer Crimes, and Forgery," according to an attorney general's statement.

The additional indictments bring the total number of charges faced by Murdaugh to 48 after a state grand jury investigation. All the charges stem from an alleged wide-ranging scheme that sought to defrauded victims of more than $6 million.

Murdaugh is currently in jail on charges of conspiracy to commit insurance fraud, accused of misappropriating millions of dollars in funds meant for the family of his longtime housekeeper who died in an accident at the Murdaugh home in 2018. A lawsuit against Murdaugh was filed in September on behalf of Satterfield's estate, seeking the money the family says it is due.

On September 4, a day after he resigned from his law firm amid allegations he had misappropriated funds, Murdaugh was shot in the head on a roadway, but survived.

He later admitted to authorities he conspired with former client Curtis Smith to kill him as part of a fraud scheme so that his only surviving son could collect a $10 million life insurance payout, according to an affidavit to support charges against the alleged gunman.

The shooting followed the June deaths of Murdaugh's wife, Margaret, and son, Paul, who were fatally shot outside their home in Islandton, South Carolina. The case remains unsolved. Murdaugh has denied responsibility in the killings.