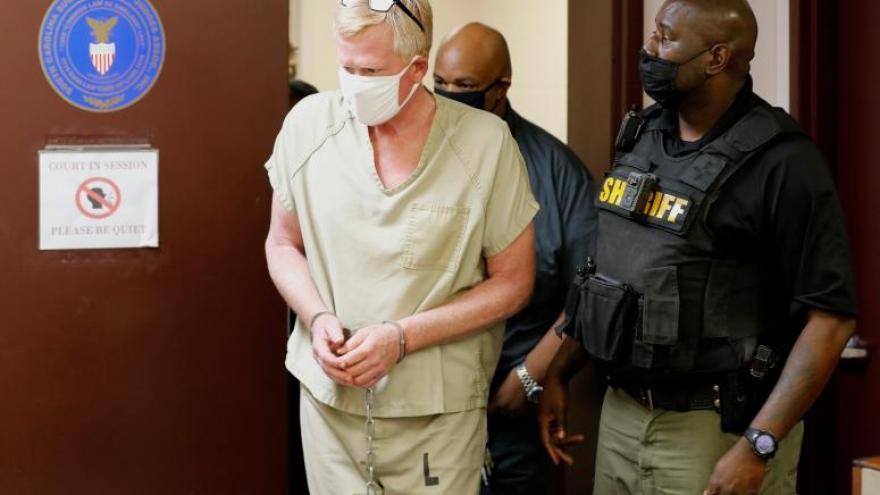 In this September 16, 2021, file photo, Alex Murdaugh walks into court for his bond hearing, in Varnville, South Carolina.

(CNN) -- A South Carolina judge has once again denied disgraced attorney Alex Murdaugh bond on charges stemming from alleged misappropriation of settlement funds in connection with the 2018 death of his family's longtime housekeeper.

The arrest represents just the latest legal and personal challenge for Murdaugh, who says he survived being shot in the head in September. Later, authorities said, he admitted the shooting was a conspiracy with a former client to kill him as part of a fraud scheme so his only surviving son could collect an insurance payout.

An order signed Tuesday by Newman says he received the evaluation on October 22.

"After considering the arguments of counsel, the evaluation submitted, pending charges and other investigations, and the apparent character and mental condition of the defendant, the Court finds that the Defendant is a danger both to himself and the community," Newman's order reads.

Murdaugh was arrested last month in Florida on suspicion of misappropriating settlement funds in connection with the 2018 death of his family's longtime housekeeper, Gloria Satterfield, authorities said.

Satterfield, who worked for the Murdaughs for more than two decades, died following what was described as "trip and fall accident" at the Murdaugh home in 2018, according to attorney Eric Bland, who is representing her estate. Bland filed a lawsuit in September against Murdaugh on behalf of Satterfield's estate seeking the money they say they are due.

According to the affidavits released last month by the South Carolina Enforcement Division (SLED), "Mr. Murdaugh coordinated with (Gloria) Satterfield's family to sue himself in order to seek an insurance settlement with the stated intent to give the proceeds to the Satterfield family to pay for funeral expenses and monetary compensation for Satterfield's children." Murdaugh deposited more than nearly $3 million into an account he owned, the affidavits said.

Attorneys for the family of Gloria Satterfield praised Newman's decision to deny bond.

"Judge Newman continues to exercise the correct judicial temperament in connection with the nature of the pending charges and Alex Murdaugh's clear and present danger to the community and to himself. This case and the crimes are unique. Ordinary bond rules are not applicable in our view," attorneys Bland and Ronnie Richter said in a statement.

"The justice system continues to work as intended regarding Alex Murdaugh and the Satterfields have confidence that with the installation of the court appointed receiver and continued oversight by judges like Judge Newman, Alex Murdaugh will no longer be receiving favorable treatment but will be drinking from the same cup of justice that every other charged criminal in the state drinks from," the statement goes on to say.

CNN has reached out to attorneys for Murdaugh.