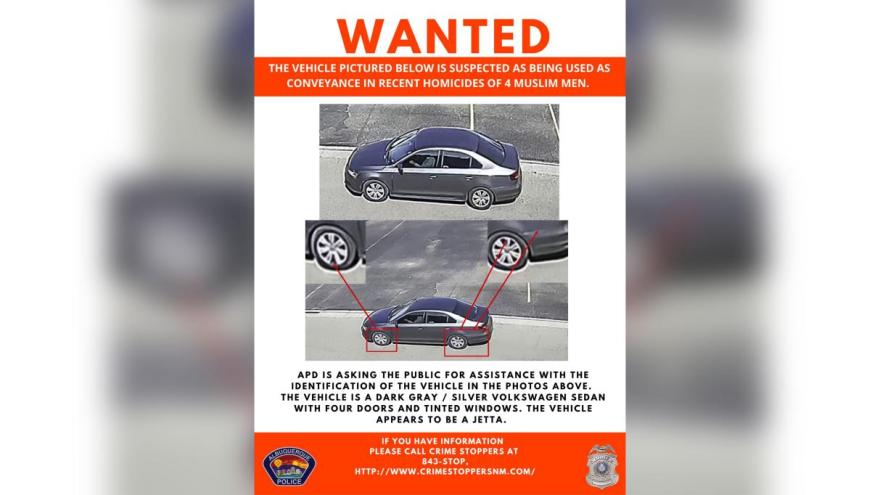 "We tracked down the vehicle believed to be involved in a recent murder of a Muslim man in Albuquerque," Medina tweeted. "The driver was detained and he is our primary suspect for the murders. We will update the media later this afternoon."

Authorities detained and questioned a father and two sons as part of the investigation into the murders that have shaken the city's Muslim community. It was not immediately clear if one of the three men was the primary suspect announced by police.

On Tuesday morning, CNN was inside the home of a Muslim family in Albuquerque that was searched late Monday night, and CNN has spoken with one of the sons who was detained, questioned and released. There is no indication the father and other son have been released.

Members of the family told CNN the father left for Texas on Monday night, shortly before their home was raided. Community leaders who are in touch with law enforcement also say the father was detained while traveling to Texas. CNN is not identifying this family, but family members deny that those who've been detained have any involvement in the shootings.

Albuquerque Police, the Bernalillo County District Attorney's Office and the Albuquerque mayor's office did not respond to CNN requests for comment.

The killings took place between November 2021 and August of this year, with the latest three occurring within the span of two weeks. All of the victims were of South Asian descent.

While police have not provided details on exactly how the killings unfolded, they have said three of the victims -- Muhammad Afzaal Hussain, 27; Aftab Hussein, 41, and Mohammad Ahmadi, 62 -- were "ambushed with no warning, fired on and killed."

Then, after community members marked a somber Friday prayer followed by a funeral for two of the victims, a fourth man -- Naeem Hussain, 25 -- was found dead, hours after attending the service. He became the third Muslim man killed in the city within two weeks and the fourth since November.

While police have not definitively said all four attacks are connected, they have said they are looking into whether that is the case. With no one in custody, police have not commented on any possible motive or whether any of the shootings are being investigated as hate crimes.

However, it is "deeply troubling" that the victims were Muslim and of similar descent, Kyle Hartsock, deputy commander of the city police department's criminal investigations division, has said.

Police have not come out with any descriptions of a suspect or suspects in the killings. They have, however, said they are seeking "a vehicle of interest," which may be connected to the four killings. The vehicle is a dark silver sedan that police say may be a Volkswagen Jetta.

But it remains unclear whom the car belongs to, or where it was in the photos released by the department. Police said the vehicle "is suspected as being used as a conveyance in recent homicides of 4 Muslim men."

"Everyone believes that that vehicle is very key to what happened in at least two of the shootings," Mayor Timothy Keller told CNN on Monday. "We also have shell casings that we're able to tie together through the national database. So that is giving us some confidence. But we may have a long way to go."

A $20,000 reward is being offered for information leading to an arrest or arrests in the killings. Authorities have also set up an online portal for residents to upload videos and images that could help investigators.

The three most recent killings claimed the lives of men from Pakistan, and the spate of shootings directed investigators' attention to an unsolved killing of an Afghan man reported in 2021.

The latest killing happened just before midnight on August 5 in the area of Truman Street and Grand Avenue. Police responded to reports of a shooting and found Naeem Hussain dead from a gunshot wound.

He had attended the funeral of two other victims that same day and expressed concern about the shootings, according to a spokesman with a mosque in Albuquerque.

On August 1, officers found Muhammad Afzaal Hussain on a sidewalk around 9:19 p.m. in the area of Cornell Street and Lead Avenue. He had been shot and died as a result of his wounds, police said.

On July 26, officers found Aftab Hussein with apparent gunshot wounds in the 400 block of Rhode Island at 10:30 p.m. He also died as a result of his wounds, according to police.

The August 1 and July 26 shootings got police looking into whether they may be connected to another killing that happened November 7. That day, officers found an Afghan man, Mohammad Ahmadi, with a gunshot wound in the parking lot behind the business he ran with his brother.

"Our homicide detectives and our investigators currently believe there is a strong possibility that the same individual committed all three of these crimes," Hartsock said last week, referring to the shootings of Muhammad Afzaal Hussain, Aftab Hussein and Mohammad Ahmadi. "While we won't go into why we think that, there's one strong commonality in all of our victims -- their race and religion.

"We are taking this very serious and we want the public's help in identifying this cowardly individual who in all three cases ambushed their victims with no warning, fired shots and killed them," Hartsock added.

The killings have put the city's Muslim community on edge, with some too afraid go to the mosque, shop for food or sit outside, according to Ahmad Assed, president of the Islamic Center of New Mexico.

Assed said he too is now among the many Muslims in New Mexico grappling with fear every day.

After hearing the news of Muhammad Afzaal Hussain's death, a Muslim mother of nine in Albuquerque told her children, "'I don't want you leaving the home after a certain hour,'" the mother, Samia Assed, told CNN on Tuesday.

"I have been vigilant outside. We watch ourselves. We don't go out. Our daily routines have changed," she said.

"We've got extra police patrols at every mosque during prayer time. We're delivering meals to folks afraid to come out of their homes. We're providing trauma services for folks also in their home or at their mosque for what they're going through," Keller said. "Right now these are very, very trying times for this community and our city."

Who the victims were

Naeem Hussain migrated as a refugee from Pakistan in 2016 -- fleeing persecution as a Shia Muslim -- and had just become a US citizen last month, according to his brother-in-law, Ehsan Shahalami.

The young man, who owned a trucking business, was described as a kind, generous and hardworking person.

Muhammad Afzaal Hussain worked on the planning team for the city of Española. He had studied law and human resource management at the University of Punjab in Pakistan before receiving both master's and bachelor degrees in community and regional planning from the University of New Mexico, according to a news release from the mayor.

"Muhammad was soft-spoken and kind, and quick to laugh," Española Mayor John Ramon Vigil said. "He was well-respected and well-liked by his coworkers and members of the community."

Few details have been released about the two other victims.