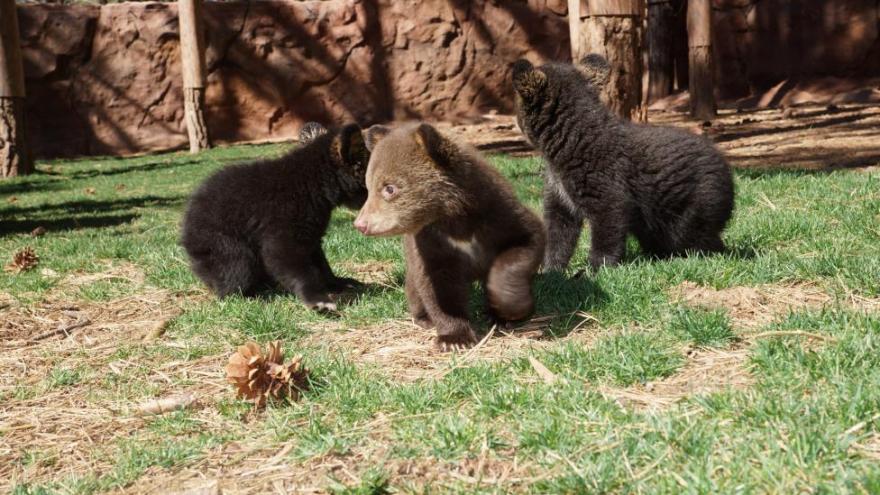 This file photo shows bears similar to those that were killed.

(CNN) -- An Alaskan father and his son who were caught on camera killing a black bear and her two cubs have been sentenced to jail, fines and hunting suspensions.

Andrew Renner, 41, will spend three months in jail, pay a $9,000 fine, forfeit his boat, truck, firearms and poaching gear -- and lose his hunting privileges for 10 years, according to a news release from the state of Alaska. His 18-year-old son, Owen Renner, was sentenced to probation and community service and will be required to take a hunters' safety course, according to the statement obtained by CNN. His hunting license also has been suspended for two years.

The Renners were out skiing on April 14 when they approached the bears' den, Alaska Wildlife Troopers said in a statement last August.

What the two men didn't know was that their actions were caught on tape. The bears were being monitored by a motion-activated camera as part of a study by the US Forest Service and the Alaska Department of Fish and Game.

Court documents say that Andrew Renner is captured on video saying, "It doesn't matter. Bear down."

"They'll never be able to link it to us," Owen Renner said, according to court records.

Two weeks later, Andrew Renner took the bear's skin and collar to the Alaska Department of Fish and Game, saying he hadn't seen the cubs and didn't know it was a nursing bear, troopers said.

In Alaska, it is illegal to shoot black bears with cubs. Both men will have to pay $1,800 restitution, the amount set by statute for killing black bears, the state's news release says.

"The defendant, and anyone else that would pursue game in our state, should be on notice that killing a sow with cubs and then poaching the cubs to cover it up, will result in a significant jail term and loss of hunting privileges," Assistant Attorney General Aaron Peterson said in a statement.

"People must know that poachers will be required to pay large fines and restitution for the illegal killing of the animals and that the vehicles, boat, planes, and instrumentalities used in wildlife crimes will be forfeited."

Prosecutors say Andrew and Owen Renner have been convicted of eight counts and four counts respectively, including the unlawful killing of the bears and unlawfully possessing the bears.