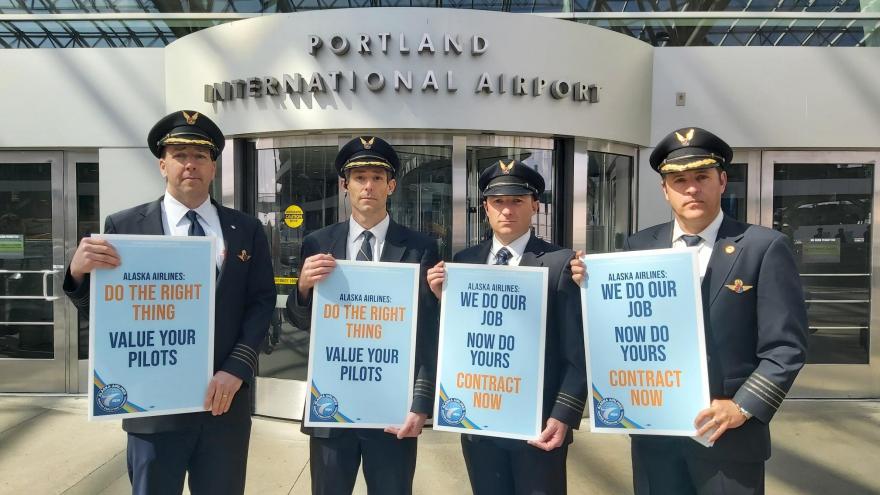 (CNN) -- Alaska Airlines canceled dozens of flights this weekend as its pilots held informational pickets in numerous cities throughout the United States in an almost 3-year-long deadlock in contract negotiations with the airline.

On Friday, Alaska Air canceled 111 flights, or 15% of its operations, according to flight tracking website FlightAware. In comparison, American Airlines and Southwest Airlines canceled only 4% of their flightsoperations the same day.

As of noon EST Saturday, Alaska Airlines canceled 77 flights, or 11% of its operations.

Alaska Airlines said 12,000 customers were affected by the cancellations. There was no mention of the pilot walkout in its statement.

"We know the sudden cancellation of their travel plans is frustrating -- we apologize to all of our guests who we let down," Alaska Airlines said in a statement to CNN Business.

Photos of pilots picketing at airports such as Portland International Airport show the pilots holding signs that say "Break the stall contract now" and "Value your pilots."

The union has been negotiating with the airline for the past three years.

"Alaska Airlines pilots have been crucial in the overwhelming success of this airline and have earned a new contract that recognizes our contributions. The contract improvements we seek are reasonable, and affordable, and will allow our airline to remain successful and competitive," said Will McQuillen, chairman of the Alaska ALPA Master Executive Council, in a statement.

As airlines struggle to keep up with a surge of post-pandemic travel, the Alaska Air pilots are advocating for "job security, stronger work rules and enhanced quality-of-life provisions" such as flexibility and reasonable schedules. The union said their contract falls behind competitor airlines.

"Three years is too long to be negotiating a contract without reaching agreement," McQuillen said.

Alaska Airlines said in a statement that it is committed to reaching a contract with the pilots, but it's vital for the company to negotiate a deal that allows for company profitability. The average captain's pay is $341,000 a year. The union represents 3,100 pilots at the carrier.

"We've put a package on the table that's competitive and addresses the issues most important to our pilots," said Jenny Wetzel, vice president of labor relations for Alaska Airlines. "It's a significant financial investment in our pilot group while recognizing that we are still working to recover from $2.3 billion in losses from the COVID-19 pandemic. We are eager to conclude negotiations quickly so our pilots can enjoy these new benefits as soon as possible."

ALPA is the largest airline union in the world, representing more than 62,000 pilots in North America.