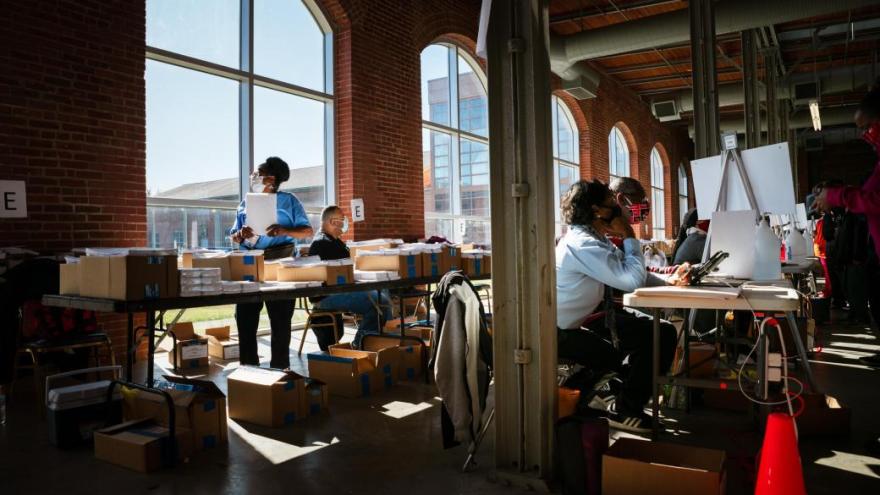 Election officials sort through blank ballots in the polling area at the Kentucky Center for African American Heritage in Louisiville on November 3, 2020.

(CNN) -- State and federal officials, along with voting rights advocates, are sounding the alarm about a growing exodus of local election officials as the November midterms draw closer and workers face continued threats and harassment.

In Kentucky, 23 of the state's 120 county election clerks have opted not to seek reelection this year -- "an unusually high" rate of departures, Kentucky Secretary of State Michael Adams, a Republican, told CNN. Five have left their posts in recent weeks, he said.

And Adams, who has defended the integrity of the 2020 election, said he reported to the FBI last week a new threat to hang him for "treason."

In Texas, meanwhile, officials have seen a 30% turnover rate among local election officials since 2020, said Sam Taylor, a spokesman for the Texas secretary of state's office. In one small Texas county, all three election workers recently resigned. The election administrator cited threats as one reason for her resignation.

"Our election workers and elections have proved themselves incredibly resilient," said Larry Norden, the senior director of the elections and government program at the liberal-leaning Brennan Center for Justice at New York University's law school. "But we are really pushing it to the limit."

Norden said the high turnover will lead to a "steep learning curve" for a new crop of election workers, and he warned that honest mistakes they make in November could be "blown out of proportion to confirm conspiracy theories."

Voting rights groups have warned for months about the coming wave of resignations.

About 1 in 5 local election workers included in a survey from earlier this year for the Brennan Center said they were likely to leave their jobs before the 2024 presidential election. About a third of that group cited false political attacks on the election system as the top reason their departure.

Some in Congress are calling for more federal resources to help local officials combat the wave of disinformation and threats.

A recent report by the staff for Democrats on the House Oversight and Reform Committee concluded that "coordinated campaigns of election disinformation are disrupting the crucial work of local election officials," overwhelming their limited resources and subjecting workers to violent threats.

It called for a "federal whole-of-government response to this growing crisis."

In Kentucky, Adams said the resignations have come as local election officials have been "deluged" by frivolous open records requests -- seeking information about the inner workings of electronic voting machines -- along with widespread demands for recounts of primary elections lost in May by wide margins.

"It's beginning to potentially pose a threat to us running a good election in November," Adams said. "And then these people that are behind all this will say, 'You can't trust these government officials. They can't run the election.' It's a self-fulfilling prophesy they are trying to bring about."

In Texas, meanwhile, the departure of three election staffers in Gillespie County -- a community of roughly 27,000 people in the Texas Hill Country west of Austin -- set off a scramble to find new staff to run this year's elections.

Anissa Herrera, who served as the elections administrator in the county, declined to comment when recently reached by CNN. But in a resignation letter obtained through a public records request by the nonpartisan news organization Votebeat, Herrera cited "dangerous misinformation," low pay, "absurd" new election laws and threats against the elections staff as key reasons behind her departure.

"The life commitment I have given to this job is not sustainable," she wrote, adding that she was resigning for her "health and well-being."

Taylor, of the Texas secretary of state's office, said Thursday that training has begun for new staff in Gillespie County.