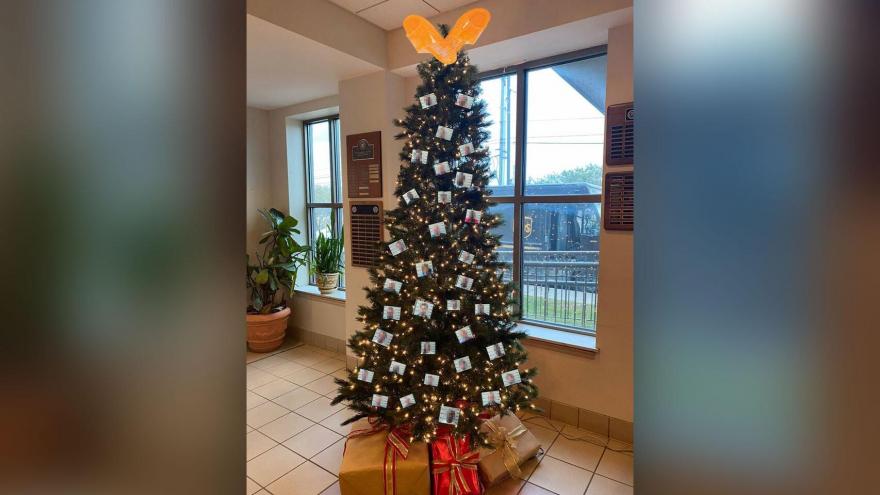 In a now-deleted post, the Mobile County Sheriff's Office shared a picture of a Christmas tree featuring mugshots. CNN blurred parts of the photo to protect identities.

(CNN) -- After an attempt at holiday humor, an Alabama sheriff's office is receiving backlash for posting on social media a photo of a Christmas tree decorated with "thugshots."

The Mobile County Sheriff's Office (MCSO) posted a photo of an office lobby Christmas tree digitally altered with mugshots made to look like ornaments and orange slippers as a tree topper to its Facebook page Thursday, CNN affiliate WPMI reported.

The slippers are issued to inmates at the Mobile Metro Jail.

"We have decorated our Tree with THUGSHOTS to show how many Thugs we have taken off the streets of Mobile this year! We could not have done it without our faithful followers!" said the caption.

The post sparked outrage in the community that led the sheriff's office to remove it from social media.

"This is inappropriate, shameful, disrespectful, despicable, disgusting and embarrassing to the citizens of Mobile County," Mobile County's NAACP chapter President Robert Clopton said in a statement Friday. "We live in a very volatile time...I mean, the relationships between law enforcement and the general public has been compromised."

Faith in Action Alabama, a religious organization fighting systematic racism, also criticized the post in a release Friday as dividing law enforcement and the community.

"We cannot tolerate, accept, nor pardon the actions of those members of the Mobile County Sheriff's Office who took part in this deplorable act," said Faith in Action Alabama. "We call on Sheriff Cochran to denounce these actions, impose disciplinary actions on those involved, and mandate cultural sensitivity training for the entire department. We expect this to be done in the next 72 hours."

Executive Director of the ACLU of Alabama JaTaune Bosby said, "The majority of people arrested for crimes struggle with mental illness and substance use issues. They need the community's assistance and care, not open scorn from leaders."

In a post shared on the organization's Facebook page Friday, Bosby said, "We hope the Sheriff and his employees hear the resounding disdain their actions have brought and realize this type of divisive and cruel messaging does not serve the community."

According to WPMI, the sheriff's office also received death threats and threats its building would be burned down if the post wasn't removed.

"We have removed our latest post on social media from Thug Thursday. There is no post more important than the lives of our deputies and the work they do in our Community. The death threats, fire to our building and other negative messages were not from our community, however, if this post jeopardizes the relationship between law enforcement and other communities then we felt it best to remove it," MCSO spokesperson Lori Myles said in a statement.

Myles told CNN the Sheriff's office was surprised to learn of interest in the orange slippers. The office has received multiple requests from the public to buy them, which the office might allow, Myles said.