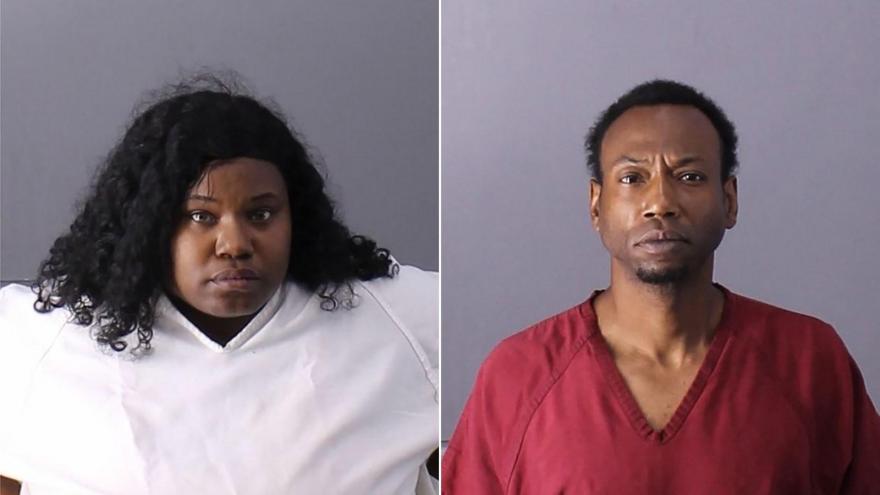 Derick Irisha Brown, left, and Patrick Stallworth were taken into custody and questioned by police last week after video evidence and witnesses connected them to a vehicle seen during the night of October 12, when Kamille went missing.

(CNN) -- The remains of 3-year-old Kamille "Cupcake" McKinney were identified Wednesday, more than a week after she was abducted from a birthday party in Birmingham, Alabama.

Jefferson County Chief Deputy Coroner Bill Yates said authorities positively identified the child remains found Tuesday as those of Kamille, but the cause and time of death have not yet been determined.

The remains were found inside a dumpster in a landfill in Birmingham after a days-long search, Birmingham Police Chief Patrick Smith said. He noted the landfill was not far from the apartment complex where she was last seen.

Authorities have been working to secure warrants for capital murder and kidnapping on two people who were previously named persons of interest in the missing girl's case, Birmingham Police Chief Patrick Smith said in a news conference Tuesday.

Patrick Stallworth, 39, and Derick Brown, 29, were taken into custody and questioned by police last week after video evidence and witnesses connected them to a vehicle seen during the night of October 12, when Kamille went missing.

Stallworth's attorney, Emory Anthony, said he didn't know "anything about what's going on."

Anthony said he doesn't know anything about the circumstances, the evidence, or the reasoning behind his arrest and added he hasn't spoken to Stallworth yet.

CNN is trying to reach an attorney for Brown.

'It only takes a split second'

Police believe the kidnapping was something Stallworth and Brown thought about and acted upon and they found an opportunity to take the young child, Smith said Tuesday.

Investigation will reveal what happened after that, he said.

"It only takes a split second," Smith said in the news conference. "We can no longer assume that everyone is a part of the village that is trying to raise the child."

The toddler was at a birthday party in the apartment complex her family lived in.

A multi-state Amber Alert issued after her disappearance said she may have been abducted by a man and a woman in a dark-colored SUV.

Police didn't get any information on the child's location when they first interviewed Stallworth and Brown -- but were able to secure warrants on unrelated charges.

Brown remains in custody for an unrelated kidnapping.

Smith said Tuesday there is no connection between the two and Kamille's family.

On Friday, police released surveillance video they hoped would help find the child, of two men seen outside the housing complex. Kamille and another 3-year-old child are also seen in the video, recorded the night she disappeared, according to police Chief Patrick Smith.

The video shows one man first walking past the two children. Later, another man stops and appears to talk to them. The video ends just after the two children follow the second man out of view of the camera.

One man was a suspect and the other may have had information about the girl's disappearance, police had said.

Her father pleaded for her return

For days, the state and country tuned into to the search as police remained hopeful to find the young girl alive.

"In my heart, I believe that she is alive, and we are going to press forward in hopes that she is. It is my hope and prayer that we are able to bring her back home to her family safely," Smith said last week.

He asked residents of the apartment complex Kamille was taken from to come forward with any cell phone video that may be helpful.

Crime Stoppers of Metro Alabama offered a $20,000 reward to anyone with information which would help police solve the crime.

Alabama Gov. Kay Ivey offered a $5,000 reward for information leading to the arrest and conviction of anyone involved in the kidnapping. A private individual put up another $1,000.

Her father begged for the girl's return.

"Drop her off anywhere and let her out. Somebody will see her. Everybody knows what's going on," Dominic McKinney told CNN affiliate WBMA. "That will be the end of that. We just want the baby back."