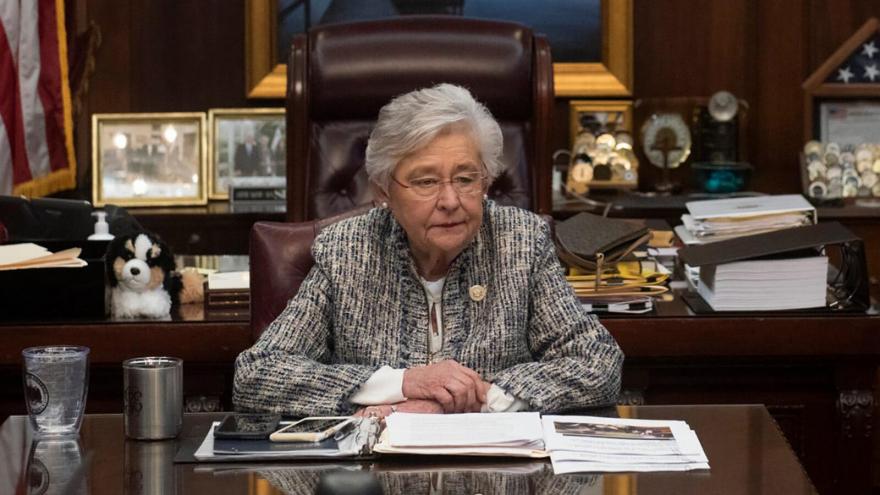 Governor Kay Ivey signs the anti-trans sports bill on Friday. Ivey is seen here at the Governor's office in Montgomery, Alabama on February 3.

(CNN) -- Alabama Gov. Kay Ivey, a Republican, signed a bill into law on Friday requiring all Alabama athletes in K-12 public school to compete in sports based on the gender they were assigned at birth -- joining a growing trend among Republican-controlled legislatures around the country that have been moving in recent weeks to impose restrictions on the lives of transgender Americans.

Ivey's office confirmed to CNN in an email that the governor signed the bill into law Friday afternoon.

While proponents of the bill say sex-specific sports teams have given biological female athletes more equal opportunities to compete, those against it say the bill is discriminatory and harmful to transgender athletes.

Alphonso David -- president of the Human Rights Campaign, one of the nation's largest LGBTQ advocacy groups -- slammed the legislation as "nothing more than a politically motivated bill designed to discriminate against an already vulnerable population."

"By signing this legislation, Gov. Ivey is forcefully excluding transgender children. Let's be clear here: Transgender children are children. They deserve the same opportunity to learn valuable skills of teamwork, sportsmanship, and healthy competition with their peers," David said in a statement. "Simply put, Alabamans deserve better than lawmakers who legislate against the health and safety of all kids for cheap political gain."

"I want thank Governor Ivey for her leadership and for protecting the rights of Alabama's female athletes," he tweeted Friday. "Standing up for what is right is not always easy, but it is always the right thing to do."

So far this year, South Dakota, Mississippi, Arkansas and Tennessee have enacted similar sports bans, with Arkansas also approving a measure earlier this month that prohibits physicians in the state from providing gender-affirming treatments to trans youth. At least 30 states have introduced similar bans this year, according to the American Civil Liberties Union's anti-trans bill tracker.

According to data from the Human Rights Campaign, at least 117 bills have been introduced in the current legislative session that target the transgender community, the highest number the organization has recorded since it began tracking anti-LGBTQ legislation more than 15 years ago. The majority of bills would affect transgender youth, a group that researchers and medical professionals warn is already susceptible to high rates of suicide and depression.