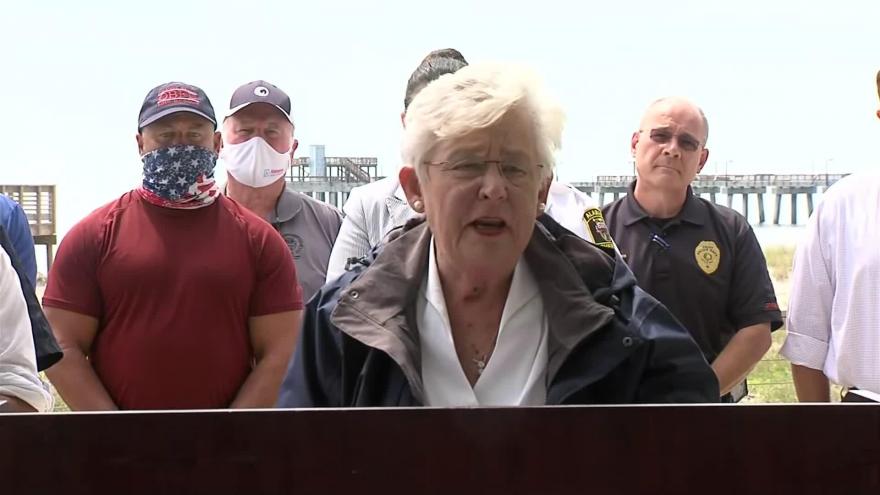 Alabama Governor Kay Ivey flew over the coastal areas of the state on Friday to view the destruction left by Hurricane Sally.

(CNN) -- Alabama Gov. Kay Ivey flew over the coastal areas of the state on Friday to view the destruction left by Hurricane Sally.

"I'm sure it could be worse. But what I've seen this morning in the flyover, Gulf Shores and Orange Beach and Fort Morgan, it's really, really bad," Ivey said.

Sally made landfall Wednesday near Gulf Shores, Alabama, as a Category 2 hurricane and left a swath of destruction across the state. The storm flooded neighborhoods, submerged homes and left thousands of residents without power.

Two people died as a result of the storm, according to Baldwin County Coroner Dr. Brian Pierce. One of the deaths was an apparent drowning that occurred in Orange Beach and was discovered Wednesday morning. The second was a death in the Foley area from storm cleanup, Pierce said. The families have been notified.

Alabama Power said Friday morning that power restoration had been completed in central and southeast Alabama but now "all efforts are focused on the Mobile area."

"There are tens of thousands of people who don't have power in Baldwin County right now and might not see power for a long time because of the number of trees that are down," said Rep. Bradley Byrne, who represents Alabama's 1st Congressional District.

"The fact that they're entwined in power lines, just being able to get the roads open has been a real challenge," he said.

On Thursday, officials urged residents to stay at home until local authorities deemed it safe to leave and evacuation teams can reach them. Ivey says the state government stands ready to help residents with recovery efforts.

Byrne said he's spoken to the White House and says President Donald Trump is "extremely concerned about the situation" and would like to go to Alabama. Byrne added that he's not certain when that would happen.

Ivey says she knows many people are hurting in the state because of the storm, and added that she wants them to know that, "we are hurting with you."

Flooding could last a week in Florida

"The hurricane is past Florida but we are going to continue to see impacts in different parts of Northwest Florida, because of the sheer amount of water that's been dumped all across the Southeast," DeSantis said.

The Florida Division of Emergency Management has deployed pumps and generators to assist with flooding and power restoration.

"So, even as it moves through states north of us, just remember that widespread river flooding is ongoing and it could continue over the next week in different parts of Florida," DeSantis added.

He implored people to stay home and off the roads so that power crews can continue restoration work, and reminded them not to drive through standing water, as there could be downed power lines.