Airline stocks soared ahead of eased US travel restrictions 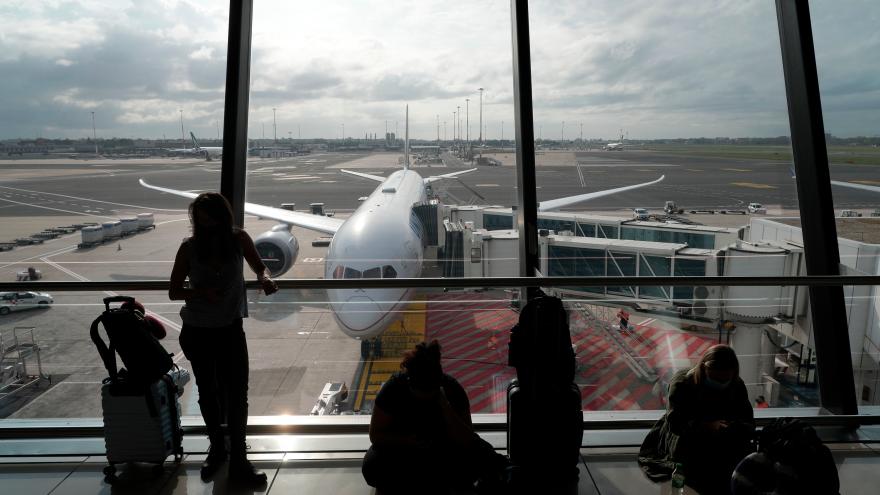 (CNN) -- The United States has officially flung open its doors to vaccinated international travelers. For companies in the industry, that's reason to cheer.

What's happening: Stocks in airlines have rallied this month in anticipation of the easing of restrictions, which investors hope will trigger a surge in bookings from people who haven't been allowed to make the trip for roughly 20 months.

Shares of American Airlines and Delta Air Lines are up 14% and 13% in November, respectively, compared to a 2% rise for the S&P 500. European carriers such as British Airways owner IAG and Air France-KLM have also rallied.

The hope is that the move by the United States is part of a broader shift in international travel rules as countries take steps to live alongside Covid-19 instead of trying to eliminate transmission. Last month, Singapore — a major business travel hub — said it would ditch quarantine for fully vaccinated travelers from certain countries, as strict border controls loosen across Southeast Asia.

Expedia's revenue in its most recent quarter was up 97% compared to the same period last year. Its stock has jumped almost 11% this month.

Kern said that the pivot from the United States and Singapore provided an immediate boost.

"We see that lift up basically as soon as it's announced," he said. "We see search queries go up."

But after an extremely volatile period, travel companies are hesitant to say the worst is behind them.

"As we look ahead, it's clear that the recovery will continue to be choppy," Delta CEO Ed Bastian said on the company's recent earnings call.

Still, Bastian pointed to "clear underlying momentum," thanks in part to the lifting of international travel rules. He said the US reopening to foreign tourists marked a "critical moment in our road to international recovery," and predicted that 75% of Delta's business would be restored by the end of 2021.

What could go wrong? New coronavirus variants that lead to a spike in infections remain a threat. Expedia noted that in the third quarter, the Delta variant led to a decline in reservations for lodging and air travel compared to the spring.

Rising fuel prices are also a problem for airlines. They could be forced to pass some of the higher costs on to customers, who may then think twice about purchasing expensive tickets.

Tens of billions of dollars could be wiped off Tesla's market value on Monday due to a Twitter poll.

The latest: Tesla CEO Elon Musk asked his followers over the weekend if he should sell 10% of his stock, a stake worth about $21 billion, my CNN Business colleague Walé Azeez reports.

"Much is made lately of unrealized gains being a means of tax avoidance, so I propose selling 10% of my Tesla stock," he said. "Do you support this?"

The tweet appears to reference a Democratic proposal for billionaires to pay an annual tax on assets like stocks, bonds and real estate that have appreciated but haven't been sold. Musk has criticized the plan.

"I was prepared to accept either outcome," Musk followed up Sunday.

In 2018, the US Securities and Exchange Commission charged him with fraud after Musk tweeted that he was considering taking Tesla private. He later secured a court-approved deal that required any social media posts containing information "material" to shareholders to be reviewed by the company first.

World food prices are up 30% in a year

Robust demand and lackluster harvests have driven world food prices to their highest level in more than a decade.

The United Nations recently reported that prices increased for the third consecutive month in October, rising 3% compared to September. The gains were driven by a sharp jump in vegetable oil and wheat prices.

The price of wheat surged 5% in October because of reduced harvests from major exporters including Canada, Russia and the United States.

Remember: The UN Food and Agriculture Organization Food Price Index has jumped by more than 30% over the past year.

In poorer countries with populations desperately in need of food assistance due to conflict or climate change, the increase risks amplifying pre-existing crises. David Beasley, the director of the United Nations' World Food Programme, recently clashed with Tesla CEO Elon Musk after he said that giving $6 billion, or 2% of Musk's net worth, could help solve world hunger.

Billionaires need to "step up now, on a one-time basis," Beasley told CNN.

Rising food prices could also fan political discontent in richer countries, where elevated inflation expectations have been grabbing the attention of policymakers.