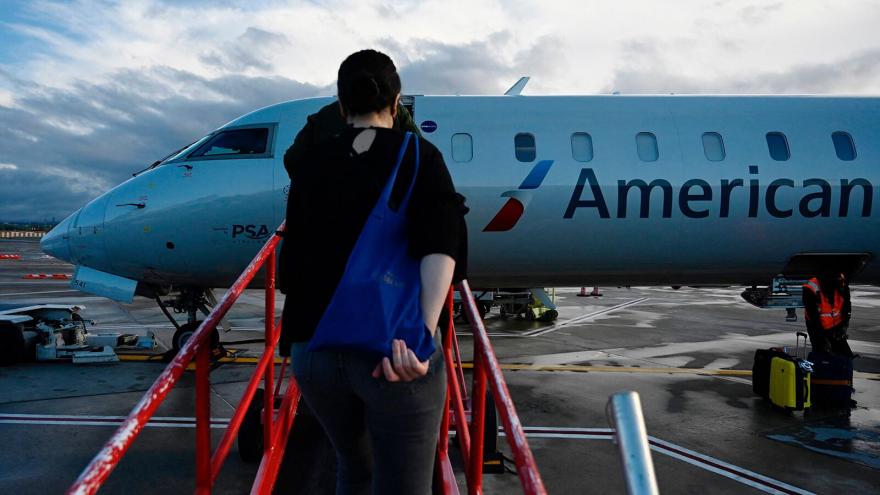 A coalition of airline trade and labor groups on June 21 wrote to Attorney General Merrick Garland and FAA Administrator Steve Dickson asking that the Justice Department handle the most heinous cases of unruly passengers.

(CNN) -- A coalition of airline trade and labor groups on Monday wrote to Attorney General Merrick Garland and FAA Administrator Steve Dickson asking that the Justice Department handle the most heinous cases of unruly passengers.

"We respectfully request that the FAA refer abhorrent cases to the Department of Justice (DOJ) so that the federal government may fully, swiftly and publicly prosecute criminal acts to the fullest extent of the law and deter this dangerous and concerning behavior," wrote Nick Calio, CEO of Airlines For America which represents American, Delta, United and Southwest airlines among others.

The Federal Aviation Administration said in a Monday statement that the zero-tolerance policy remains in place "and we will continue to work with local law enforcement and the DOJ to make it clear that unsafe and unruly behavior simply does not fly."

The Justice Department did not immediately responded to a CNN request for comment.

Authorities have received more than 3,000 reports of unruly airplane passengers so far this year, and the majority of those involve face mask rules, the FAA told CNN last week.

The sharp spike in misbehaving and even violent passengers includes 2,300 reports that passengers refused to comply with the federal requirement to wear face masks on airplanes. The mandate also applies to other modes of public transportation such as buses.

Dickson in January launched a zero-tolerance policy against passenger misbehavior after the agency observed a dramatic increase in reports. Officials began tracking the number of reported instances of unruly passengers -- something they never did before.

He told CNN in an interview last month he is "concerned" about the increase in unruly passengers and the safety risk the problem poses to flights.

"The aviation system that we have in the United States is the safest form of travel in human history," Dickson said. "That's what this zero-tolerance policy is all about -- to make sure that we get this situation under control."

CNN previously reported that the agency has publicly released details of 23 incidents and announced proposed fines totaling more than $400,000.

The largest single fine was proposed in May as $52,500 against a passenger who the agency said "tried to open the cockpit door, repeatedly refused to comply with crew members' instructions, and physically assaulted a flight attendant by striking him in the face and pushing him to the floor."

Flight attendants and another passenger restrained that unruly passenger, but he "freed himself from one of the handcuffs and struck the flight attendant in the face a second time."

Sara Nelson of the Association of Flight Attendants labor union told CNN earlier this month that the situation is "out of control."