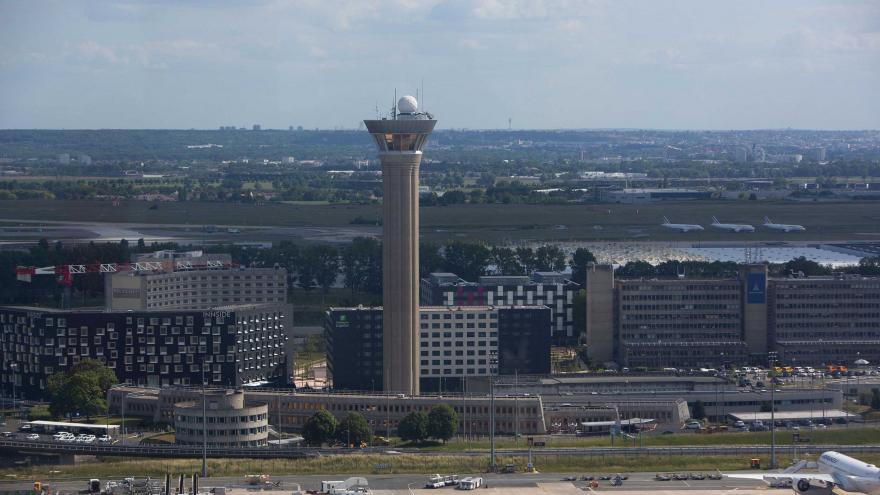 (CNN) -- A "slip of the tongue" by an air traffic controller at Paris Charles de Gaulle airport saw two planes come within 300 feet of crashing into each other on Tuesday.

The incident involved a United Airlines Boeing 787 arriving from Newark, US, and an EasyJet Airbus A320 preparing to take off en route to Malaga, Spain, according to a report from the French air safety investigation authority for civil aviation (BEA) published Tuesday.

At the time, planes were taking off from the 09R runway and landing on 09L, according to the report, but the controller told the United Airlines plane to land on 09R.

The crew sought to confirm the change of runway using the words "understand" and "sidestep for 9 right," according to the report.

However the controller did not check the readback from the crew and proceeded to tell the EasyJet plane to line up for takeoff from runway 09R.

At this point the United Airlines plane was still lined up to land on 09L so the crew started the maneuver, but when they checked again the plane was coming into land on their runway.

The EasyJet crew asked the controller why the United Airlines plane was coming down on 09R and warned of a potential collision.

At this point the plane was flying at an altitude of 300 feet, 1,300 meters from the end of the runway. Both the EasyJet crew and the controller told the United Airlines crew to ascend once more, and the pilots aborted their landing.

By the time the planes crossed paths they were separated by just 300 feet.

The controller did not have a direct line of sight to the 09 runways because the equipment that faces in their direction appeared to be broken and she was working at a different screen, according to the report.

At the time of the incident the screen facing towards the 09 runways had been fixed and the controller was preparing to switch, which she was "worried" about, according to the report.

She also told investigators she had been confused by a previous request from a different plane to land on runway 09R, which is longer than 09L, due to technical difficulties.

The BEA named a number of contributing factors to the incident, including the fact that the controller was out of practice due to reduced air traffic during the Covid-19 pandemic.

Investigators also said that the United Airlines crew should have used the term "confirm" instead of the non-standard "understand."