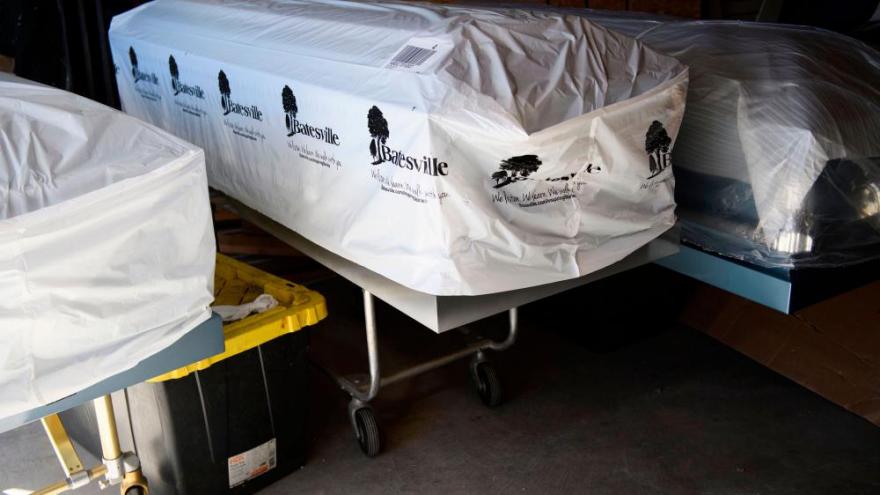 Covered empty caskets stand in a garage at the Boyd Funeral Home during a surge of Covid-19 deaths on January 14 in Los Angeles, California.

(CNN) -- As Los Angeles County battles against the unrelenting coronavirus, an air pollution control agency says it has temporarily suspended limits on cremations in order to assist crematoriums in the county with a "backlog" caused by the pandemic.

The South Coast Air Quality Management District said in a news release Sunday that permits for crematoriums usually contain limits on the number of human remains that can be cremated each month, based on the potential impact they will have on air quality.

But after requests from both the county coroner and health department, the agency issued an emergency order suspending permit conditions that limit the number of cremations, as long as crematoriums submit an email notice and meet certain requirements.

The news is part of a devastating series of headlines in recent days reflecting the gravity of the crisis in Los Angeles County: It just surpassed a million total reported infections. Hospitals declared internal disasters. And officials began adding more capacity to store bodies of Covid-19 victims.

Earlier this month, the county said a person was dying of the virus every eight minutes.

"The current rate of death is more than double that of pre-pandemic years, leading to hospitals, funeral homes, and crematoriums exceeding capacity without the ability to process the backlog of cases," South Coast AQMD said in a statement.

And its order says there's another surge of deaths that's approaching, fueled by the gatherings that took place over the New Year's holiday.

The emergency order will be in effect for 10 days and can be extended, the agency said.

Los Angeles County health officials reported Sunday more than 13,800 people have died of Covid-19 since the pandemic's start and more than 7,400 remain hospitalized with the virus -- 23% of whom are in the ICU.

"The most important action for everyone to take to stop the spread of COVID-19 and save lives is to stay home and not mingle with others not in your household," the release said.