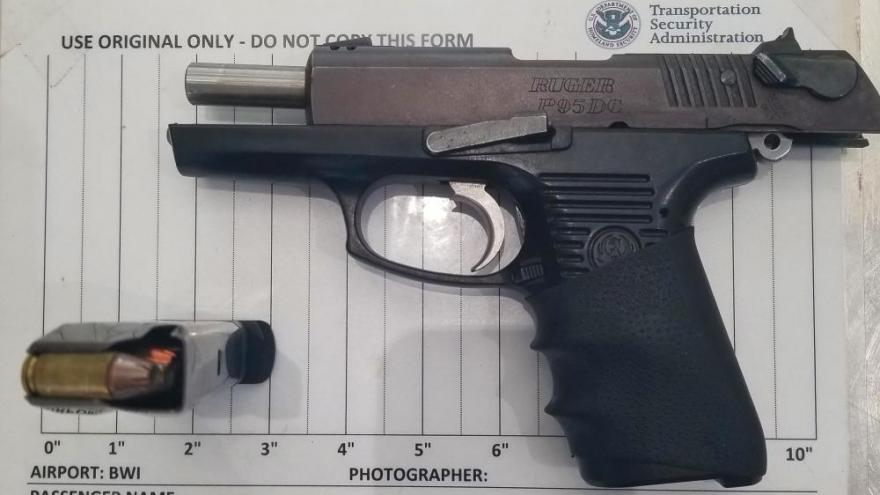 A handgun found by the Transportation Security Administration in carry-on baggage at Baltimore/Washington International Airport.

(CNN) -- Despite a sharp decrease in air travel due to the coronavirus pandemic, the Transportation Security Administration said the rate of guns found per passenger screened at airport security checkpoints last month was up three times over last year's figure.

The agency said about 80% of the firearms found in carry-on bags at checkpoints were loaded.

Officers at Atlanta's Hartsfield-Jackson airport -- the world's busiest -- found 27 guns, or nearly one daily, in July.

The numbers do not include weapons properly packed in checked baggage. Those weapons must be packed in a secured and hard-sided container and declared to airline officials when checking in. TSA noted that some airlines have additional restrictions on transporting firearms and ammunition, and that local laws vary.

The increase comes on the heels of officers discovering more guns last year than in any previous year. The 4,432 guns found at checkpoints in 2019 marked a 5% increase over those found in 2018.

Civil fines for those who try to transport a firearm inappropriately through an airport start at $2,050 for an unloaded weapon and at $4,100 for a loaded firearm. The agency said it also suspends any trusted traveler membership, such as its TSA PreCheck program, for people found transporting a firearm.

TSA Administrator David Pekoske said in a statement the spike in gun finds comes at an already-challenging time for airport screeners.

"Travelers must understand that firearms are prohibited items at airports and in the passenger cabins of aircraft," Pekoske said. "As hard as we are working to mitigate other risks at this time, no one should be introducing new ones."

More than 1,500 of the TSA's 60,000 employees have tested positive for the coronavirus nationwide. The agency has changed screening processes to protect passengers and its officers.

The agency screened nearly 832,000 people on Sunday -- the first time it saw more than 800,000 people in a day since the pandemic cratered air travel in mid-April.