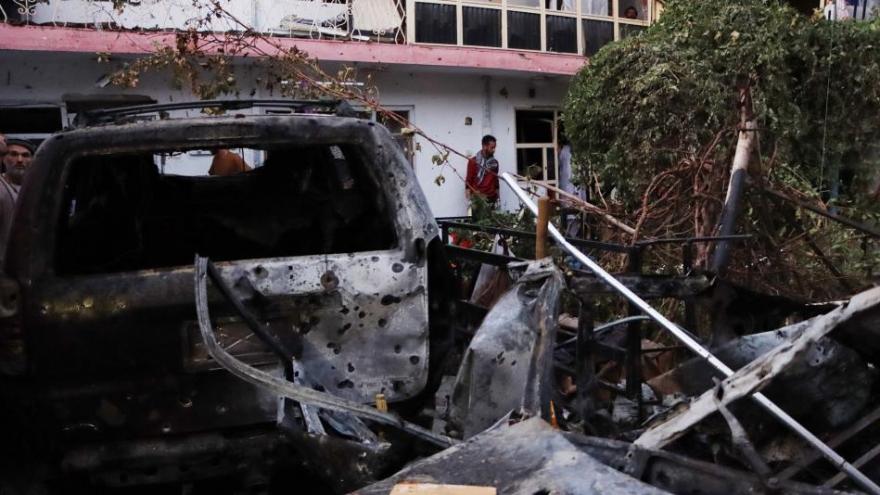 A US Air Force investigation into a US drone strike in Kabul that killed ten civilians at the end of August found that though "execution errors" were made, the law was not broken.

(CNN) -- A US Air Force investigation into a US drone strike in Kabul that killed 10 civilians at the end of August found that though "execution errors" were made, the law was not broken.

"The investigation found no violation of law including the law of war. We did find execution errors ... combined with confirmation bias and communication breakdowns that regrettably led to civilian casualties," Air Force Inspector General Sami Said stated during a news briefing on Wednesday.

The review of the August 29 strike found there was evidence that children were at the site two minutes before the missile was launched, but that evidence was not visible to the strike cell at the time of the operation, Said said.

"The physical evidence of a child was apparent at about the two-minute point [before the missile was launched]," he said. Said added that the strike cell "100% did not pick up on the children."

Said conducted two independent reviews for the investigation, and he said there was no evidence the strike cell was aware women and children were at the site.

"I have their chats from the time preserved. We have their comms. We have their testimony under oath, and what they perceived to exist at the compound at the time did not include any women or children," Said told reporters. He also explained that the ISIS-K attack on Kabul airport only days earlier, in which 13 US service members and dozens of Aghans were killed, added to the sense of urgency and the pressure on decision makers to respond to a perceived threat.

The botched strike provoked anger in Afghanistan and beyond and added to concerns about the handling of the chaotic US exit from the country after nearly 20 years of war. The report is likely to strengthen the case of family members of those killed during ongoing discussions about compensation payments, known as ex gratia payments, with the Pentagon, as well as possible visas to relocate to the United States.

Seven children were killed in the strike, which targeted Zamarai Ahmadi, a 43-year-old technical engineer for a US-based nonprofit organization who had no ties to ISIS-K.

"It's not lost on us the severity of the outcome and the fact that we killed 10 Afghan civilians," Said remarked. But he said the strike, based on a misinterpretation of intelligence and observations made under the threat of imminent attack, did not violate the law, including the law of war.

In the days after the strike, Pentagon officials defended the operation as a "righteous" strike, claiming that it had eliminated a terrorist threat. Officials pointed to secondary explosions as evidence of possible suicide bombs in the car, a white Toyota Corolla.

Approximately two weeks after the strike, the Pentagon acknowledged for the first time that it had been a "tragic mistake," in the words of Gen. Frank McKenzie, the commander of US Central Command.

After conducting 29 interviews as part of his review, including 22 with those who were directly involved in the strike, Said concluded that no arbitrary or capricious decisions had been made in carrying out the operation.

The drone strike was carried out by a strike cell based in Qatar and was authorized by Maj. Gen. Chris Donahue, the commander of the 82nd Airborne Division, who was on the ground in Kabul.

The president of Nutrition and Education International, the organization for which Ahmadi worked, criticized the investigation as "disappointing" and "inadequate."

"According to the Inspector General, there was a mistake but no one acted wrongly, and I'm left wondering, how can that be?" said Steven Kwon in a statement released through the American Civil Liberties Union. "Clearly, good military intentions are not enough when the outcome is 10 precious Afghan civilian lives lost and reputations ruined."

The report outlining the investigation's findings is classified but Said did list three main recommendations from it.

He suggested improvements could be made to the "implementing procedure" before a strike is carried out. Said explained there had been a computer bag in the Toyoto Corolla that was struck that service members wrongly assumed contained explosives. They made the assumption because in the terrorist attack days earlier that had killed 13 US service members and dozens of Afghans outside Kabul airport, the bomber had carried a computer bag.

CNN previously reported that the CIA had issued a warning, saying there were civilians in the area.

Said also recommended improving the processes for assessing whether civilians are present before a strike is carried out.

"Regrettably, the interpretation or the correlation of the intelligence to what was being perceived at the time in real time was inaccurate," he said. "In fact the vehicle, its occupants and its content did not pose any risk to US forces."