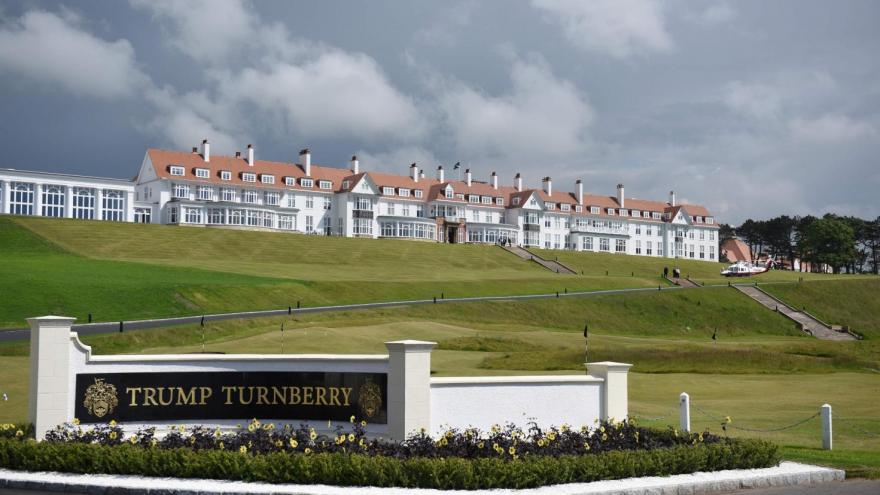 A general view of the Trump Turnberry hotel and golf resort in Turnberry, Scotland , is shown on June 24, 2016.

(CNN) -- The Air Force has ordered a review of all international layover stays following controversial visits by crew members at Donald Trump's Turnberry resort during refueling stops, which have again raised ethics questions about government use of the President's private entities.

"Air Force leadership directed Air Mobility Command to review all guidance pertaining to selection of airports and lodging accommodations during international travels," the Air Force said in a statement Sunday evening, which was first reported by Politico.

The House Oversight and Reform Committee earlier this year launched a probe of the stays after aircraft would be directed to land at Prestwick Airport, in Glasgow, Scotland. The crew members would then stay at Turnberry. The Air Force had previously launched a separate inquiry into those stays.

Over the weekend, it was reported that a US Air Force C-17 crew stayed at the Turnberry resort during a March refueling stop en route to Kuwait, another example of Trump's company earning money from taxpayer dollars, which has led some government watchdogs to argue the arrangements breach ethical norms and potentially violate a clause of the US Constitution.

"While initial reviews indicate that aircrew transiting through Scotland adhered to all guidance and procedures, we understand that U.S. Service members lodging at higher-end accommodations, even if within government rates, might be allowable but not advisable," the Air Force said in its statement Sunday evening. "Even when USAF aircrews follow all directives and guidance, we must still be considerate of perceptions of not being good stewards of taxpayer funds that might be created through the appearance of aircrews staying at such locations."

After news of the congressional probe became public, the Air Force has said the stopover of a US Air Force C-17 in Glasgow is "not unusual."

"As our aircrews serve on these international airlift missions, they follow strict guidelines on contracting for hotel accommodations and all expenditures of taxpayer dollars. In this case, they made reservations through the Defense Travel System and used the closest available and least expensive accommodations to the airfield within the crews' allowable hotel rates," Air Force Brig. Gen. Ed Thomas said in a statement. "While we are still reviewing the trip records, we have found nothing that falls outside the guidelines associated with selecting stopover airports on travel routes and hotel accommodations for crew rest."

According to Air Force statistics between 2015 and 2019, Air Mobility Command aircraft stopped at Prestwick a total of 936 times, and 659 of those stops involved overnight stays. The statistics do not say which hotel was used during those overnight stops, but the number of overnight stays in the area has increased since Trump took office.

The Air Force says the reason for the airfield's increased usage derived from a flight directive issued to mobility crews in June 2017 which it said was "designed to increase efficiencies by standardizing routing locations, with Prestwick being among the top five locations recommended for reasons such as more favorable weather than nearby Shannon Airport, and less aircraft parking congestion than locations on the European continent."

In the case of the March 13 flight, seven active duty and National Guard crew members stayed at Turnberry. The Air Force said the Turnberry resort was less expensive than a nearby Marriott and that both were under the per diem rate of $166. The Air Force also said it schedules stopovers based on such factors as leg distance and contract fuel availability.

The use of Trump's private properties for government-related travel has been an ongoing controversy during his presidency. Vice President Mike Pence's recent decision to stay at Trump's resort in Doonbeg, Ireland -- hours away from his scheduled events in Dublin -- led House Democrats on the oversight and judiciary committees to demand documents about how the decision was made. Trump also raised eyebrows during last month's G7 meeting by suggesting the 2020 event should be hosted at his golf resort in Miami, and internal Defense Department documents obtained by CNN show that department personnel have charged more than $300,000 at Trump-branded properties since the start of Trump's presidency through last November.

The House Oversight Committee has been investigating for several months whether increased military expenditures benefiting the Trump Turnberry golf course and resort in Scotland represent a conflict of interest for the President, according to committee documents.

But the Defense Department has refused to comply with investigators' requests to date, a senior Democratic committee aide told CNN on Friday.

The newly revealed investigation, which was first reported on Friday by Politico, represents yet another front at which House Democrats are probing Trump's finances and businesses, with various Democrat-led panels pushing new or existing probes going into the 2020 election season. Republicans have accused Democrats of presidential "harassment" and launching a fishing expedition.