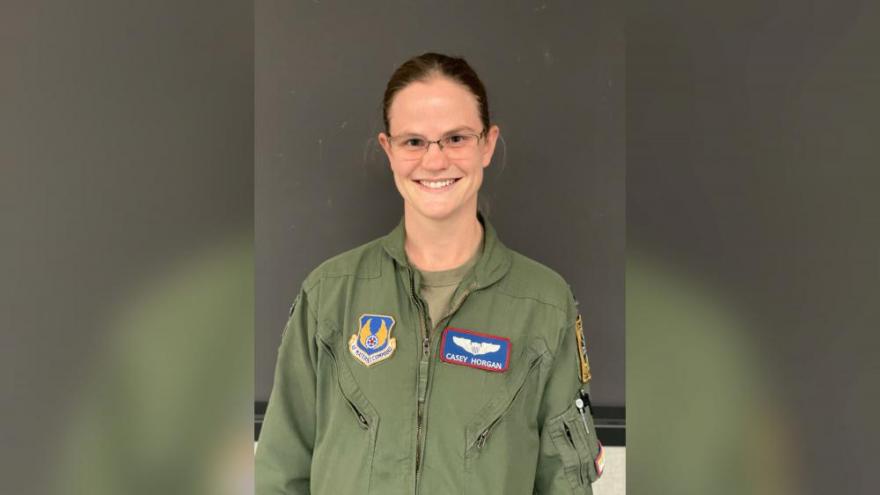 Capt.Casey Horgan is part of the class 2020A of the US Air Force Test Pilot School at Edwards Air Force Base.

(CNN) -- They soar into the desert skies, piloting some of the most sophisticated aircraft the world has ever seen. They have an innate understanding of high-performance aircraft and are always pushing the boundaries on performance.

They are the small cadre of flight test pilots who graduate from the US Air Force Test Pilot School (TPS) at Edwards Air Force Base in California -- and this year they include a group of five women, a record number.

For the five already dominating the skies, it's no big deal and they just wonder why there aren't more females doing it.

"There was never anything I was told I couldn't or shouldn't do," Horgan said. "I grew up with great examples of female aviators, my mom included, and all of her friends and there was no barrier there."

The five women graduated in a class of 24 students. The average number of women per class is usually one to two, according to Vanhoy.

Their class photo will share a wall with TPS graduates and aviation legends Gen. Chuck Yeager and Apollo 11 astronaut Buzz Aldrin. Years after completing the program, each man returned to the school to serve as its commander. They helped to establish the developmental curriculum and disciplined ethos the school still uses today.

The world's most famous test pilot, Yeager, passed away this month at the age of 97. He was the first man to fly faster than the speed of sound, and broke his own record by flying twice as fast as the speed of sound. Current students and instructors have the same barrier-breaking mentality as they push the envelope of flight tests, putting themselves at great risk every day.

Edwards' TPS is the only Air Force test pilot school and is located at the world's leading aeronautical test facility. Based in the Mojave Desert, jets of all speeds and sizes can be seen flying above miles of dry lake bed, and felt throughout the day each time a sonic boom pulses over the surrounding valley.

The school only accepts 45 of the "best and the brightest" pilots and engineers per year -- divided into 2 classes -- for the rigorous year-long master's degree program. Out of a pool of around 250-300 applicants, usually less than 10% of the applicants are women, Vanhoy said.

Capt. Casey "Hulk' Horgan, test pilot. Age 31, Horgan flew C-130 Hercules transport aircraft at Eglin Air Force Base in Florida before attending TPS. Both of her parents were Air Force aviators and she knew she wanted to fly since she was a child.

Capt. Rachel "Tumble" Williams, test pilot. Age 29, she attended the Massachusetts Institute of Technology and flew C-17 Globemaster cargo aircraft in Texas before getting into TPS. She grew up near the Kennedy Space Center in Florida and watched shuttle rocket launches from her driveway growing up. Her father was an Air Force pilot.

Capt. Sarah "Booster" Vorgert, flight test engineer. Age 27, worked as a weapons tester at Eglin Air Force Base in Florida before going to TPS. She is one of the youngest students to be accepted into the school and started going to air shows as a toddler.

Capt. Kalyn "PsiPhi" Tung, flight test engineer. Age 30, she graduated from the US Air Force Academy and stayed to teach there. She thought airplanes were cool and had a female teacher she looked up to who graduated from TPS, which made her want to pursue a career in flight test.

Raina "Shade" Duncan, civilian flight test engineer. Age 35, she worked at Edwards Air Force Base for 11 years on the flight line and on T-7 jet trainers before she was accepted into TPS. The mother of a 2-year-old daughter, she attended her first air show when she was 3 years old.

Do the barriers really exist?

Sitting around a conference table at TPS two nights before graduation, the women talked humbly about the significance of what they have accomplished.

They're part of a community of female aviators who are considered barrier breakers, but their biggest question is why aren't more women doing what they're doing. When asked why it's important to see more women in the cockpit and involved in aviation in general, the unanimous sentiment was best expressed by Horgan: "Because there's no reason not to."

"We don't get it," Williams said. "Because I personally haven't experienced any barriers to getting here because of being a woman. It was something I wanted to do -- so I did it. That's where we all are so we're really like, 'Where's everybody else?'"

Horgan and Williams, the two pilots of the group, had the advantage of having parents in the Air Force. Both pilots agreed that access and visibility played a huge part in piquing their interest as children.

Vorgert, the youngest in the group and one of the youngest students to attend TPS, noted that changes are being made to barriers women have faced in the past.

"There's a certain standing and sitting height requirement that females don't meet -- because we're not the average 1970s male," she explained. "But they've been going through the decades-old requirements and starting to open them up to more demographics."

TPS students get the chance to fly aircraft they'd never have access to otherwise. Regardless of their previous experience, students are trained to handle everything from a T-38 supersonic jet trainer to an F-16 Falcon single-engine fighter and a C-12 Huron twin-engine turboprop plane. In other words, some of the Air Force's coolest and most versatile aircraft.

Vanhoy said that a common misconception about TPS is that it teaches people how to fly.

"All pilots and engineers must have in-depth operational experience and a background of engineering degrees to even qualify to apply. Most pilots come in with over 1,000 hours of flying time including combat experience," he said.

Bonded by obstacles they overcame throughout the school year, the women discussed the expectations they had for the program and the reality they experienced -- both extraordinary and challenging.

"There's nowhere else in the world that you can fly five different aircraft in the same week," Williams said. "As a pilot, where we come from in military aviation you usually have one aircraft and you're very good at your one aircraft. And then you spend this whole year broadening yourself and realize that you can be good at multiple aircraft."

In Duncan's case, after working at Edwards for 11 years, she was chasing the opportunity to finally fly.

"The only way to get into a pointy nose airplane as a civilian and as an engineer is to come to Test Pilot School," she said. "There are definitely days when you feel like you don't know if you can make it to the weekend, but given the class we have and the support structure we have, we always do."

Besides flying, all pilots and engineers are required to take intensive classes in physics and engineering for advanced mission and combat systems.

A typical day in the life of a Test Pilot School student, according to Vanhoy, is partly spent in highly technical academic courses, followed by a briefing, flying and then debriefing to put the classroom theory into practice.

Tung said she had no idea what she was getting into at TPS.

"It's been a lot more than I expected," she said. "It tested every single thing I've ever thought about every single time we were approached with something new."

The world of aviation launched from dream to reality 117 years ago, when the vision and determination of the Wright brothers lifted the Wright Flyer off the ground at Kitty Hawk field on December 17, 1903. Since then, the industry has been largely dominated by men, but women found ways early on to make their mark.

In 1929, Amelia Earhart founded the Ninety-Nines, an international organization that is still active today and includes thousands of female pilots from 44 countries, according to its website.

In its 76-year history, 80 women have graduated from Test Pilot School. According to school records, Lt. Jane Holley was the first female to attend the school as a flight test engineer in 1974. In 1988, the first female pilot arrived, Capt. Jacquelyn Parker. Two female graduates went on to become astronauts and one of them, Eileen Collins, became the first female shuttle commander on a 1999 mission of space shuttle Columbia.

Vanhoy has been the technical director of TPS for the past 11 years in a career at the school that spans more than 30 years. He arrived in 1988, the same year as Capt. Parker, and remembers discussion at the time about her attendance marking a milestone for flight test.

"It's a challenge for ladies to break into that field," he said. "I'm glad to see a change because the skills needed to fly are not proprietary of men. Ladies can definitely multitask and handle the strains of the environment, they can fly airplanes as good as the guys can."

Another historic milestone is that the school is under the leadership of its first female commandant. Col. Sebrina Pabon graduated as a flight test engineer in 2006, and returned to the school to lead it for a two-year term until 2022.

The women hope their presence in this year's class doesn't turn out to be an anomaly.

While there's still a long way to go to make women in aviation more visible, efforts are underway from both inside and outside the Air Force. Edwards developed a brand new STEM (Science Technology Engineering Mathematics) program that educates youth at local schools about flying -- seeking to expose them to the world of aviation and inspire them through activities and events.

Williams' father was a pilot but she can't recall ever seeing a female pilot at an airshow and thinks that would have made a large impression on her.

"Having that visibility makes all the difference to kids especially," she said.

Duncan's insight for the lack of females in flight test comes from her perspective as a civilian, and the lack of awareness about the existence of TPS for people outside the Air Force.

"I think there could be barriers to people wanting to join the military and committing to that for their life," she said. "But I went to school and got a degree, I loved airplanes and did the engineering thing, and I'm doing the same kind of job. I don't think that people know flight test is out there and that this is a cool thing you can do."

While the women figure out ways to recruit, inspire and encourage, they will soon launch full time into flight test, collectively but separately working on the F-22, C-17, C-130, and B-21 programs.

"We're the ones testing the new aircrafts," Vorgert said. "So let's make sure these new aircraft can fit both men and women."