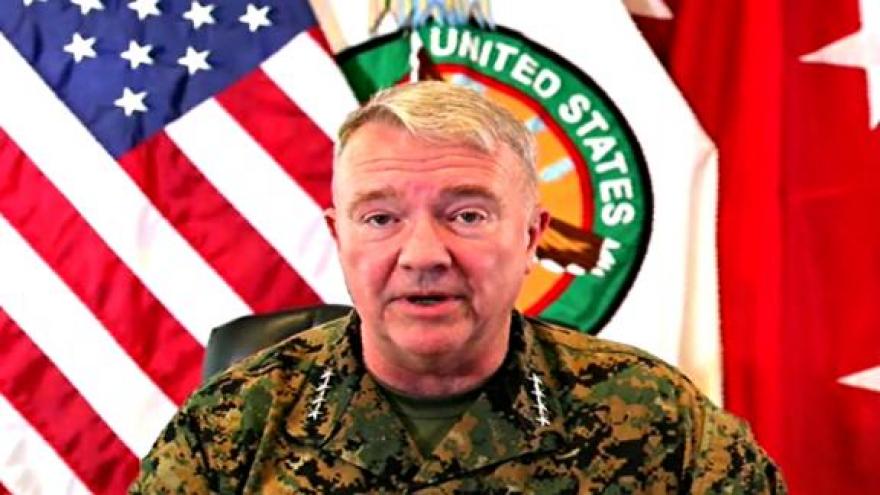 (CNN) -- The Air Force commander who helped oversee the final withdrawal of US troops from Afghanistan detailed the historic experience on Thursday, explaining how forces spent a mere three hours swiftly loading up several military planes during the last mission of America's longest war.

Lt. Col. Alex Pelbath, the mission commander of the final five US military planes out of Afghanistan, told CNN in an interview that there were a total of 18 missions executed during the chaotic exit from the country and that he was on-board the final plane that left Afghanistan on Monday, when the US fully withdrew troops from the country.

"I had the entire picture of the C-17 force in front of me," Pelbath said, referring to the view he had inside the last military plane to leave Afghanistan. "For sure an image that I will never forget. And I'd say that the moment that I had looking at that was, 'I can't believe it's really here.'"

"Those five aircraft, between the first aircraft landing and the last aircraft leaving, was three hours," he explained. "My particular jet was on the ground only for about an hour and 15 minutes, maybe an hour and a half."

The comments from Pelbath provide fresh insight into the final hours of the US' 20-year war and come as officials grapple with how exactly they're going to scrutinize the dramatic last days of the conflict, in which US forces rushed to evacuate Americans and Afghan allies in a nearly month-long episode that turned violent when a terrorist attack at Kabul's airport killed 13 US service members.

Asked about the tragic incident and whether it affected him as he worked to execute the evacuation mission, Pelbath told CNN: "No, the danger doesn't affect it at all. As a matter of fact, what you focus on is the plan."

"We had an amazing plan going in there," he said, noting his team had spent a couple days in Kabul putting it together. "Instead of focusing on the danger, what all the operators do is you focus on the mission you got at hand. So you focus on your individual tasks, you focus on success, and you focus on doing your part of the mission as well as you possibly can."

The mission held personal meaning for Pelbath: His grandparents were Hungarian refugees who fled to Austria in 1957, where they boarded a military flight to the US as part of Operation Safe Haven. That flight was based out of Charleston, South Carolina, where Pelbath is currently based.

Pelbath, who graduated from the Air Force Academy shortly before the 9/11 attacks and said his career has revolved around Afghanistan, described the evacuation missions as the "hardest three weeks of everybody's lives."

"I mean it wasn't just the flying every day, but doing what we're doing, I know it took a mental toll on a lot of folks. There were a lot of folks that had, I would say, some emotional attachment" to Afghanistan, he said.

Pelbath also detailed the orders he gave when the final evacuation mission was set to be completed, saying that when he got the OK from Maj. Gen. Chris Donahue, the commander of the 82nd Airborne Division, he gave the order "clamshell," for the five planes to close up and begin taxiing the runway in Kabul.

"Once all aircraft reported in to me that they were ready to go, Gen. Donahue gave me the thumbs up. We issued the 'flush the force' call and that was our indication for all of us to taxi together to the end of the runway," Pelbath said. "And then all five aircraft departed in a 30-second sequence, so we had all aircraft off the deck in under three minutes."