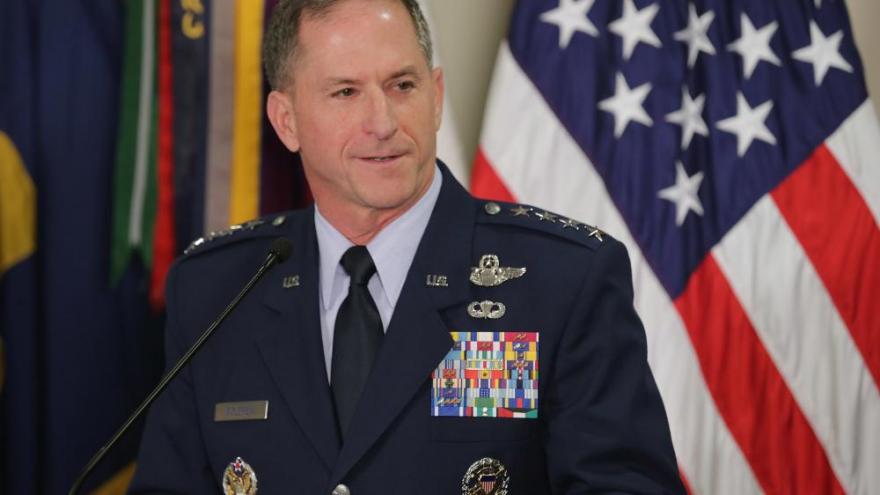 sent a memo to commanders late Monday calling the death of George Floyd a "national tragedy" and voicing support for the service's top enlistee, Chief Master Sgt. Kaleth Wright, after he made a passionate plea for justice.

(CNN) -- The chief of staff of the US Air Force, Gen. David Goldfein, sent a memo to commanders late Monday calling the death of George Floyd a "national tragedy" and voicing support for the service's top enlistee, Chief Master Sgt. Kaleth Wright, after he made a passionate plea for justice, vowing to do more to fix racial inequality among the ranks, according to a copy of the message obtained by CNN.

In his memo, which he asked commanders to distribute widely, Goldfein also announced that he and Air Force Secretary Barbara Barrett have directed the service's inspector general "to do an independent review of our legal system, racial injustice, and opportunities for advancement."

Floyd, a 46-year-old black man, died in the custody of Minneapolis police after a video showed him pleading for air as an officer knelt on his neck. His death has sparked protests and unrest across the nation as demonstrators demand police reform and justice served to Floyd's arresting officers.

"The death of George Floyd is a national tragedy. Every American should be outraged that the conduct exhibited by police in Minneapolis can still happen in 2020. We all wish it were not possible for racism to occur in America, a country founded on the sacred ideal that 'all men (and women) are created equal' and have the 'unalienable rights, that among these are life, liberty and the pursuit of happiness.' But it does, and we are at a moment where we must confront what is," Goldfein wrote.

"We see this in the apparent inequity in our application of military justice. We will not shy away from this; as leaders and as Airmen, we will own our part and confront it head on," the memo states.

Goldfein's message to airmen under his command came after Wright posted Monday on Twitter, "Just like most of the Black Airmen and so many others in our ranks...I am outraged at watching another Black man die on television before our very eyes."

"Who am I? I am a Black man who happens to be the Chief Master Sergeant of the Air Force. I am George Floyd," he said.

He outlined his struggle with the "Air Force's own demons" of racial disparities in military justice and discipline and the "clear lack" of diversity in leadership.

In his memo to commanders, Goldfein said that despite their "vastly different experiences growing up and during our time in the Air Force," he and Wright will "attack this together in the weeks and months ahead."

"Discussing our different life experiences and viewpoints can be tough, uncomfortable, and therefore often avoided. But we have been presented a crisis. We can no longer walk by this problem," he wrote. "We must look inward at our Air Force, and at every echelon of command, so we emerge stronger as a profession of arms."

"It is time for every one of us to strive for understanding and a culture of inclusiveness and belonging across our Air Force," Goldfein added. "I don't have the answers, but I do know there is no room for bigotry, hatred or small mindedness in our force. Period. Every member of our team needs to know we have their back."

Goldfein's message also comes as defense officials tell CNN there was deep and growing discomfort among some in the Pentagon even before President Donald Trump announced Monday that he is ready to deploy the military to enforce order inside the United States.

"There is an intense desire for local law enforcement to be in charge," a defense official said, alluding to the laws that forbid the military from performing law enforcement roles within the United States.

There is also discomfort with the civil order mission among some National Guard troops -- more of whom are now mobilized inside the US than at any previous time in history.