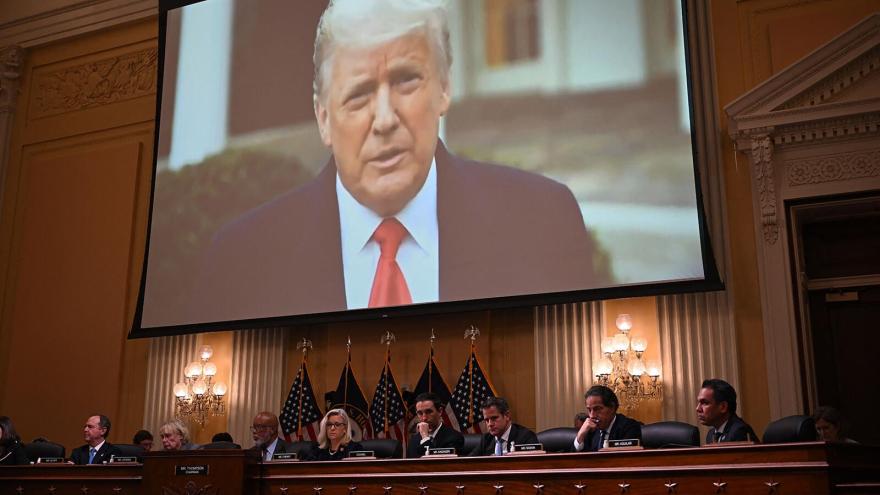 Cassidy Hutchinson, an aide to former White House chief of staff Mark Meadows, testified during a congressional hearing that she heard a secondhand account of how former President Donald Trump was so enraged at his Secret Service for blocking him from going to the Capitol that he lunged to the front of his vehicle and tried to turn the wheel.

(CNN) -- Cassidy Hutchinson, an aide to former White House chief of staff Mark Meadows, testified during a congressional hearing Tuesday that she was told that former President Donald Trump became "irate" when informed by security that he would not be going to the Capitol on January 6, 2021, because the situation was not secure.

And she testified that she heard a secondhand account of how Trump was so enraged at his Secret Service detail for blocking him from going to the Capitol that he lunged to the front of his vehicle and tried to turn the wheel.

Tony Ornato, then-White House deputy chief of staff, told Hutchinson that Robert Engel, who was the Secret Service agent in charge on January 6, 2021, repeatedly told Trump on their way back to the White House after Trump's Ellipse speech that it wasn't safe to go to the Capitol, she said.

According to Hutchinson, Ornato recounted Trump screaming, "I'm the f**king President. Take me up to the Capitol now." Trump then "reached up toward the front of the vehicle to grab at the steering wheel," Hutchinson remembered learning. She added that, according to Ornato, the former President used his other hand to "lunge" at Engel.

Engel and Ornato have both testified to the committee behind closed doors, but their statements were not used in Tuesday's hearing.

After the testimony, a Secret Service official familiar with the matter told CNN that Ornato denies telling Hutchinson that the former President grabbed the wheel or an agent on his detail.

The Secret Service, through the Department of Homeland Security office of legislative affairs, notified the committee Tuesday afternoon that it will make the agents involved available to testify under oath, the official said. The agents are also prepared to say under oath that the incident itself did not occur.

The lead agent, Engel, previously testified before the committee and described the interactions with Trump on January 6, including the former President's desire to travel to the Capitol, but Engel was not asked about an altercation or being assaulted, the official said.

Asked about the Secret Service disputing the testimony, a committee spokesman said, "The committee trusts the creditability of a witness who is willing to testify under oath and in public but is also willing to hear any and all information that others may have that would aid in their investigation."

"Ms. Hutchinson testified, under oath, and recounted what she was told. Those with knowledge of the episode also should testify under oath," said attorney Jody Hunt in a Twitter post.

"Her Fake story that I tried to grab the steering wheel of the White House Limousine in order to steer it to the Capitol Building is 'sick' and fraudulent," Trump wrote.

"Wouldn't even have been possible to do such a ridiculous thing," he added.

Secret Service chief of communications Anthony Guglielmi told CNN that "the United States Secret Service has been cooperating with the Select Committee since its inception in spring 2021, and will continue to do so, including by responding on the record to the Committee regarding the new allegations surfaced in today's testimony."