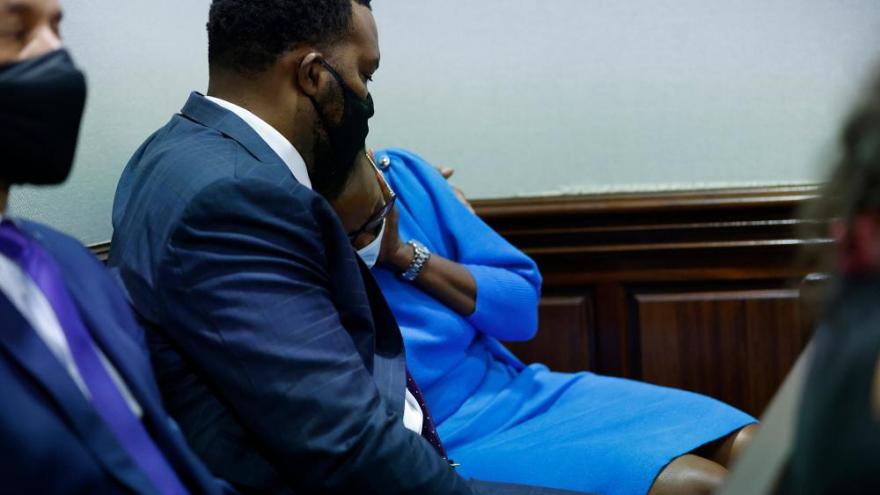 Wanda Cooper-Jones, Arbery's mother, reacts next to her attorney, Lee Merritt, during the trial on November 5, 2021, in Brunswick, Georgia

(CNN) -- Ahmaud Arbery's mother put her head in her hands and wept as body cam video that showed the aftermath of her son's shooting was played in court Friday.

The pool reporter in the room who made the observation also noted that during that footage, one of the jurors was seen "shielding herself with her notebook," seemingly unable to watch.

It was the first day of trial for the three men accused in the 25-year-old jogger's killing. After the court was adjourned Friday evening, Wanda Cooper-Jones, Arbery's mother, told reporters during a short press conference that watching the video was "heartbreaking."

"The many times over the last couple ... (of) months, I questioned what happened to Ahmaud in the last minutes of his life," she said. "I often avoided the video but today I decided it was time to see the video."

The graphic video was body cam footage from Glynn County Police Officer William Duggan, who testified on Friday that he responded to the scene after finishing an off-duty job because he was nearby.

Duggan testified he found a Black man lying on the pavement when he arrived on scene and a couple of other people nearby, which he later identified as the defendants. In the video, Duggan approaches Arbery, who is lying motionless, face down in the street.

The footage shows Duggan turning Arbery over onto his back, his shirt and shorts saturated with blood.

"There's nothing I can do for this gentleman," Duggan is heard saying before removing his gloves and wiping his hands with a towel. EMS and fire personnel arrived soon after, the video shows.

Gregory McMichael, his son Travis McMichael and their neighbor William "Roddie" Bryan Jr. are charged with malice and felony murder. They also face charges of aggravated assault, false imprisonment and criminal attempt to commit a felony. They have all pleaded not guilty.

During cross-examination from Jason Sheffield, an attorney for Travis McMichael, the officer confirmed Arbery's eyes were also not moving when he arrived on the scene.

"Today was a very difficult day for the family," Lee Merritt, an attorney for Arbery's family, said in the press conference outside the courthouse. "We saw some very graphic video today, we saw some very violent scenes."

The attorney added the "the most difficult, the most upsetting part" was that the defense attorneys "did everything they could to put the victim, Ahmaud Arbery, on trial. To criminalize his very existence."

Attorneys for the McMichaels said in their opening statements that their clients were trying to conduct a citizen's arrest of Arbery, whom they suspected of burglary after they and several neighbors had become concerned about individuals entering a home under construction. Travis McMichael only shot Arbery in self-defense, they said.

But in her opening statement, prosecutor Linda Dunikoski had earlier argued the defendants tracked down, cornered and fatally shot Arbery without evidence or knowledge he'd done anything wrong.

"All three of these defendants did everything they did based on assumptions," she said. "Not on facts, not on evidence -- on assumptions. And they made decisions in their driveways based on those assumptions that took a young man's life."