Ahmaud Arbery would not have been killed if he were White, prosecutors say in hate crimes trial 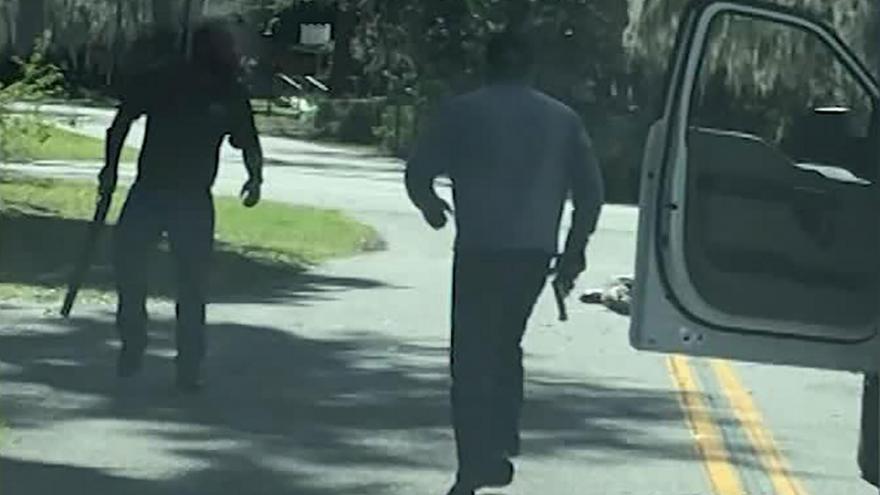 The jury is selected and opening statements are set to begin in the federal hate crimes trial of Ahmaud Arbery's killers.

(CNN) -- The three White men who chased down and killed Ahmaud Arbery, a Black jogger, had previously used racist language and followed Arbery because of their perceptions of Black people, a prosecutor said Monday in opening statements of their federal hate crimes trial.

"At the end of the day, the evidence in this case will prove that if Ahmaud Arbery had been White, he would have gone for a jog, checked out a cool house under construction, and been home in time for Sunday supper," Assistant US Attorney Barbara Bernstein told the jury. "Instead, he went out for a jog and ended up running for his life."

In one text message Bernstein read, she quoted Travis McMichael as saying, "Zero n***ers work with me." The message went on to say, "They ruin everything. That's why I love what I do now. Not a n***er in sight."

The defendants' attorneys, speaking separately, acknowledged the men had used racist language -- but said that their actions toward Arbery were not related to race.

"Greg and Travis McMichael followed Ahmaud Arbery not because he was a Black man, but because he was the man who had been illegally entering the house that was under construction," said A.J. Balbo, Gregory McMichael's defense attorney, referring to an unfinished house where Arbery had been seen.

The McMichaels gave chase to Arbery, who was out for a jog, and Bryan later joined the pursuit and recorded video of the killing from his pickup. They were not arrested at the time, but the video was later released publicly and sparked public backlash that led to charges against them.

At their state murder trial, the McMichaels claimed they suspected Arbery was involved in a crime, conducted a citizen's arrest and shot him in self-defense. But prosecutors laid out how the men stalked Arbery based on vague suspicions of wrongdoing.

The three were each convicted of murder in November in the state trial that avoided discussion of race. This federal trial will more clearly focus on race as prosecutors must prove the men acted out of racial animus.

The three men are all charged with interference with rights and attempted kidnapping, and the McMichaels each face a weapons charge. The McMichaels initially agreed to plead guilty, but the judge overseeing the case rejected the plea deal because of concerns about the agreed-upon sentence. The three men have since pleaded not guilty.

The stakes of the trial are seemingly low because the defendants are already serving life sentences in prison for the murder convictions, although they have said they plan to appeal the verdicts. Still, the trial represents a test of how the legal system deals with allegations of violent racism.

"It sends a message to every Black person everywhere that you can't hunt people down who are legitimately in a place just because you're afraid," said hate crimes expert and Indiana University law professor Jeannine Bell. "Doing that is racist, and we will punish it."

The jury was finalized Monday morning and consists of eight White jurors, three Black jurors and one Hispanic juror, according to details provided in court. Three White people and one Pacific Islander have also been selected as alternates.

What prosecutors said in opening statements

In the prosecution's opening statement, Bernstein laid out some the evidence that is expected in the trial.

She cited a witness who will be called later who knew Gregory McMichael while he was working as an investigator in the Glynn County District Attorney's Office. Bernstein said the witness recalled his reaction to the 2015 news that civil rights leader Julian Bond had died.

"These three defendants did nothing. Not one tried to render any aid," she said.

Bernstein said when police spoke with Bryan the day of the chase, he said he "saw a Black guy running down the street being chased, and he figured the guy had to be a criminal. Instinct told him that Ahmaud must be a thief."

Even as Bernstein made note of those racial slurs, she said they were not what the case is about.

"Racial slurs, no matter how deeply offensive, are legal and nobody is going to suggest otherwise," Bernstein said. "But you'll still hear lawyers ask about them because those slurs can provide you with important evidence about why a defendant did what he did."

In their opening statements, the defense attorneys sought to separate their clients' racist language from the events of February 23, 2020.

"The evidence is going to show that Greg McMichael followed Ahmaud Arbery because he believed that he was the man on those videos" at the house, Balbo said. "And Greg Michael was right."

Balbo acknowledged that the prosecution had already discussed some of the racist and offensive language his client had used in the past and would continue to do so during the trial.

"I'm not going to tell you that he had never used some of the coarse and offensive language that you'll hear about," Balbo said. "That evidence is going to be something that you'll need to put into context with all of the other evidence that you'll be hearing."

Amy Lee Copeland, the defense attorney for Travis McMichael, also acknowledged the racist language that will be presented during trial.

Copeland instead framed what her client did as the actions of a concerned resident of an area experiencing an uptick in crime and suspicious activity. "Travis was trying to be a good neighbor. He and his father are trying to help everybody, even if it had disastrous results," she said.

"Racist tropes, slurs, (and) opinions are really the lowest of human emotions, right? The idea that I don't like this person because they don't look like me," Theodocion said. "With Roddie Bryan, you are not going to see a man who sees the entire world through the prism of race."

Theodocion also reiterated Judge Lisa Godbey Wood's instructions to the jury, that "we cannot judge this case based on emotion. And that's easier said than done. It can be hard in any case, but a case like this," Theodocion said. "I've heard the n-word more today than I have in the last three or four years already and we haven't even heard any evidence yet."