After Wyoming defeat, Cheney prepares for the longer-term fight against Trump -- and her own political future 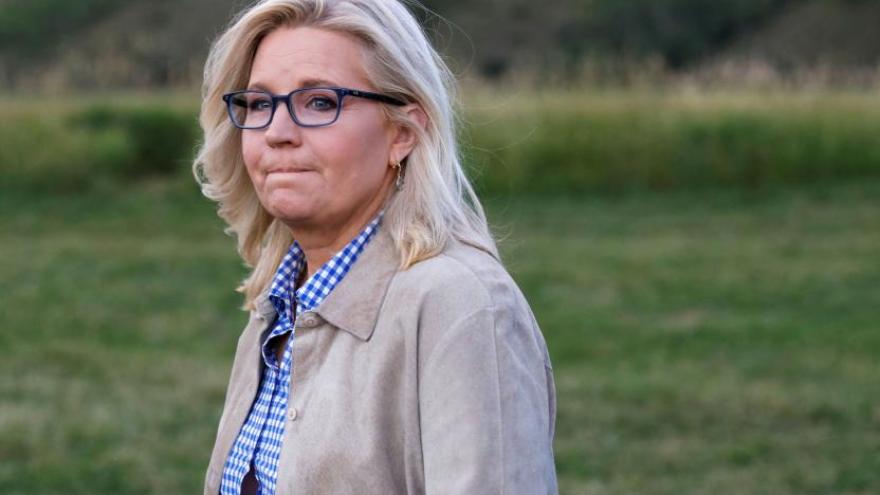 The day after losing the Republican primary for Wyoming's House seat, Rep. Liz Cheney, pictured here, in Jackson, Wyoming, August 16 is positioning herself for a longer-term fight with former President Donald Trump.

(CNN) -- The day after losing the Republican primary for Wyoming's House seat, Rep. Liz Cheney is positioning herself for a longer-term fight with former President Donald Trump.

The question Cheney must confront is whether there is an appetite within the Republican Party for a candidate singularly focused on serving as an antagonist for its most popular and dominant figure.

In the wake of her loss to Trump-endorsed Harriet Hageman on Tuesday, Cheney began building an apparatus to support her future political moves -- including a potential presidential bid as a Trump foil. Cheney acknowledged Wednesday morning that she is considering a run for president in 2024, a race that Trump is largely expected to enter soon.

"It is something I'm thinking about, and I'll make a decision in the coming months," Cheney said on NBC's "Today" on Wednesday.

Cheney's advisers told CNN she intends to wait until next year to make any decisions, when she's no longer in Congress or serving as vice chair of the House select committee investigating the events surrounding January 6, 2021. She is cognizant of appearing to politicize the findings of the committee.

However, her role on the select committee comes with the kind of spotlight that other Republican Trump critics have struggled to find. Cheney would confront the same challenge when she departs office in January, and a presidential candidacy could be the only way to address it.

The three-term congresswoman has acknowledged in recent days that she knew her strategy in the Wyoming primary, where she maintained a relentless focus on Trump in interviews and television ads despite the former President having won the state by 43 percentage points in 2020, primary wasn't popular.

The morning after her defeat, Cheney repeated the message she'd delivered on election night: She knew how to win in Wyoming, but chose to reject a strategy of cozying up to the most popular figure in her party and parroting his lies about fraud in the 2020 election.

"That path would've required that I accept, that I embrace, that I perpetuate the Big Lie," she said on NBC.

She also acknowledged that moving the GOP away from Trump's influence would be a longer-term project.

"Look, I think the Republican Party today is in very bad shape, and I think we have a tremendous amount of work to do. I think it could take several election cycles. But the country has got to have a Republican Party that's actually based on substance, based on principles," Cheney said.

Already, Cheney has begun building the political apparatus to support a battle with Trump.

Just hours after giving her concession speech, Cheney established a political action committee called "Great Task." That PAC, which will initially be funded by money left over from her House campaign, gives Cheney a vehicle to raise money and fund her political work.

It is the first of several next steps from Cheney, an adviser told CNN, as she starts to make good on ideas expressed in her election night speech and opens a new chapter in the wake of her landslide defeat.

The PAC's name invokes the words of Abraham Lincoln, who spoke in his Gettysburg Address of the "great task" facing the nation.

Cheney cited Lincoln at length in her remarks Tuesday night on a ranch in Jackson Hole, as the sun set over Grand Teton behind her. She even drew a parallel to his losses before he won the presidency in 1860.

"Abraham Lincoln was defeated in elections for the Senate and House before he won the most important election of all," she said.

Cheney will have to answer questions about how to remain relevant once her work as the vice chairwoman of the House select committee has ended and she departs Congress in January 2023.

James Goldston, the veteran television producer who has spent the last several months advising the House panel, was on hand in Wyoming for Cheney's speech. He was not in Wyoming as part of his work as a special adviser to the House committee, CNN learned, but rather on assignment for his own production company for potential future projects involving Cheney.

Goldston, the former president of ABC News, was surveying the scene at Cheney's campaign event at a cattle ranch outside Jackson. He and a small film crew were taking in the picturesque landscape, with the mountains in the distance and the Wyoming prairie bathed in the evening sunlight.

Cheney worked closely with Goldston's team in presenting the committee's findings in a TV-ready fashion to a national audience. They have worked together to edit hours and hours of recordings that have brought to life the insurrection as it unfolded.

"She invited him as a friend and it has nothing to do with committee work," Jeremy Adler, a spokesman for Cheney, told CNN. Goldston declined to comment.

Cheney's House primary loss could offer some insight into her longer-term thinking. Her campaign courted Democrats and unaffiliated voters, urging them to change their registration and vote in the Republican primary.

In the 2024 presidential election, Democrats could be facing an uncompetitive nominating contest with President Joe Biden on the ballot seeking a second term -- a prospect that could create space for more party-switching.

"Let us resolve that we will stand together -- Republicans, Democrats and independents -- against those who would destroy our republic," Cheney said in her Tuesday night speech.

Biden called Cheney following her primary loss, according to a person familiar with the matter who declined to divulge the contents of the conversation, which was first reported by Bloomberg.

But a presidential race is much different than a House primary.

In Teton County, the liberal pocket of northwestern Wyoming where Cheney lives and where she won three-fourths of the vote Tuesday, Democrats who had changed their party registration to vote for Cheney in the primary were speculating about her future.

The catch for Cheney: Most said they saw Tuesday's primary as a one-time occurrence, and said they couldn't see themselves voting in a Republican presidential primary.

Sandy Buckstaff, a 67-year-old Jackson retiree, waited in line outside the Teton County Library on election day to switch his registration to vote for Cheney "even though I disagree with her on policy positions from soup to nuts."

"The Republican Party moved away from me," said Buckstaff, a former Republican who in recent years has voted for Democrats. "Watching Liz Cheney do the right thing, I thought, what the heck?"

He said he is "curious" about Cheney's future, but wouldn't vote in a GOP presidential primary for her.

"I don't see where she finds hope in that," Buckstaff said, "because the Republican Party base won't support her."

John Grant, a Republican who voted for Cheney on Tuesday, said that even though her point of view makes up only a slim share of current GOP thinking, he hopes she proceeds with a presidential bid.

"I do think she has a future," Grant said. "But I think it's going to take a while -- there are a lot of Trump supporters out there."