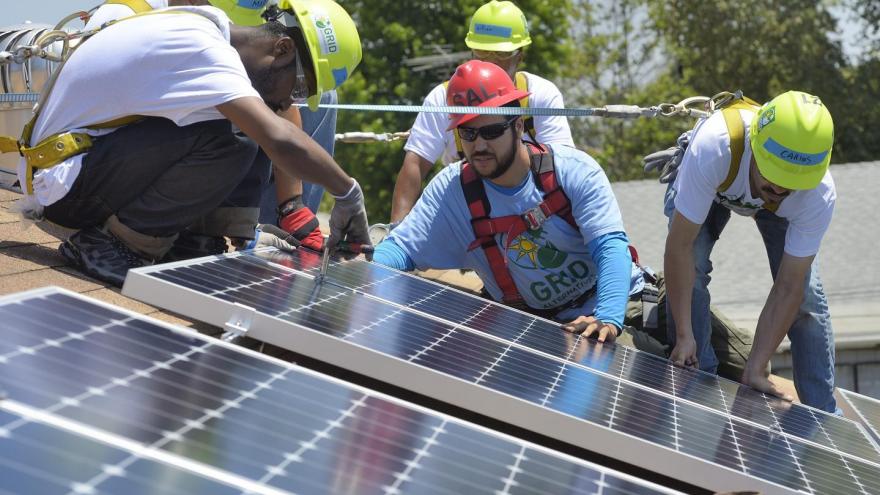 (CNN) -- As the dust settles on Democrats' $1.75 trillion economic framework, climate has emerged as a big winner.

The framework crafted by President Joe Biden and congressional leaders includes $555 billion for climate and clean energy provisions. If passed, it would be the largest legislative investment on climate in US history, and a significant step forward for a Congress that has punted on climate action for decades -- all while global temperatures have risen at an alarming rate.

"We're spending over five times what we spent in the [2009] Recovery Act, and it's a lot broader," Josh Freed, founder of the Climate and Energy Program at the center-left think tank Third Way, told CNN, referencing the $90 billion spent on clean energy during the Obama administration. "The Biden administration and congressional Democrats learned a big lesson, which is these kinds of investments can have a huge positive impact on sectors, technology, and the economy."

In the end, climate measures made up the largest policy line in Biden's framework. White House officials say it will cut a billion metric tons of US greenhouse gas emissions by 2030. The White House is also confident the legislation will put the US track to meet Biden's Paris Agreement goal: a 50-52% reduction in greenhouse gas emissions below 2005 levels by the end of the decade.

At the start of negotiations, environmental groups were asking for as much as $700 billion in clean energy investments in clean energy. The bill's final number is close to what was originally imagined -- no small feat considering the bill's topline was slashed from $3.5 trillion to $1.75 trillion.

Senate negotiations were touch-and-go for months, with West Virginia Democrat and Senate Energy and Natural Resources Committee Chairman Joe Manchin opposing a cornerstone climate policy, the clean electricity program. While that program was ultimately dropped from the package, other investments were added to make up for it.

It also includes the first ever 300,000-person Civilian Climate Corps to conserve public lands and help the US be more resilient against climate impacts -- and promises Corps jobs will be union jobs. And it includes a new Clean Energy and Sustainability Accelerator, otherwise known as a green bank, meant to leverage private funding to issue loans for clean energy projects around the country.

"I think there was a big effort by Congressional leadership and the White House to make up for some of the pollution cuts lost" from the clean electricity program, said Leah Stokes, a senior policy adviser at Evergreen and associate professor of political science at the University of California, Santa Barbara. "It's going to be an ongoing effort to really make sure that we're making progress in the power sector at the pace we need to. The tax credits are going to do a lot of the work in that regard."

Though the framework has been announced and draft legislative text is circulating through Congress, lawmakers have yet to vote. Manchin hasn't explicitly endorsed the framework, and it's unclear when exactly the bill might be passed along with Biden's bipartisan infrastructure bill.

Democrats in the House and Senate said their focus now is ensuring no more climate provisions get cut from the $555 billion topline, and House progressives are lobbying to make sure that both bills are passed at the same time, saying they can't have one without the other.

"I think overall, progressives are pretty willing to support the framework and are willing to work to get it passed, which is a fairly good place because there are a lot of compromises there," Rep. Ro Khanna of California, a leader in the Congressional Progressive Caucus, told CNN.

Boost for Biden at climate talks

Former US climate officials told CNN that even though the framework is not yet codified, it gives Biden and US Special Climate Envoy John Kerry leverage in upcoming international climate talks in Glasgow, Scotland, allowing them to point to a roadmap of future clean energy investments.

Speaking to reporters from an international conference in Rome on Thursday, John Podesta, Obama's former top climate official and the co-founder of liberal think-tank Center for American Progress, said international officials were paying attention to the latest developments in Congress. He said the package, if passed, shows Biden is living up to his promise to be a world leader on climate.

Former US Climate Envoy Todd Stern, who served in the Obama administration, told CNN the US is going "into Glasgow in pretty strong position with a very good goal" and the package is "legitimately, by far, the biggest climate change bill ever."

"I think you can look at this package and say, 'this puts us well on the path; it might not quite guarantee it,'" Stern said.