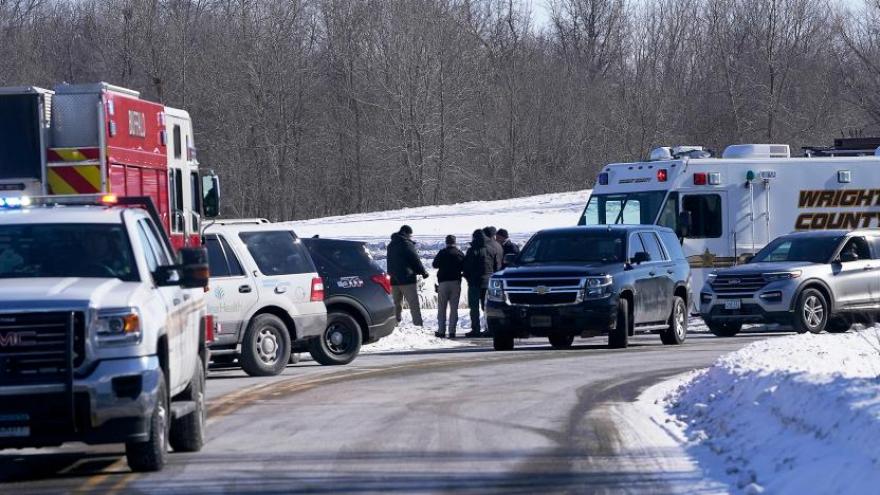 (CNN) -- The man accused of killing one person and wounding four others in a shooting at a Minnesota health care clinic had threatened a mass shooting at the same health care center in 2018, according to a police report obtained by CNN.

Gregory Ulrich, 67, is accused of shooting five people at the Allina Health Care Clinic in Buffalo on Tuesday morning before being taken into custody at the scene.

Ulrich is scheduled to appear in court on Thursday morning, and was being held at the Wright County Jail. It was not clear whether he has an attorney.

The police report from October 2018 says Ulrich talked about "shooting, blowing things up, and practicing different scenarios of how to get revenge" because he was "angry with the medical community," according to a doctor who reported the incident.

A doctor at Allina Health told a responding officer that Ulrich called three times and spoke about revenge scenarios and he "wanted it big and sensational so that it makes an impact," the police report says.

The doctor told investigators at the time Ulrich was "a high threat to society and himself," according to the report.

When officers contacted Ulrich, he allegedly told them "he was telling the doctor about his dreams and that he would not really do anything."

Ulrich told an officer he had dreams about "revenge" to the people that "tortured" him, "referring to the back surgeries and medication issues after the surgeries," the police report says. Ulrich claimed doctors wouldn't provide pain medication after he had back surgery two years ago, his brother said Wednesday.

Ulrich was evaluated at a hospital but wasn't charged in relation to the threatening phone calls, the police record shows.

Court documents from 2018 show an ensuing harassment restraining order that says Ulrich was to not to contact the doctor or enter the Allina Clinic and Buffalo Hospital unless "transported by medical personnel for emergency treatment."

Gregory Ulrich pleaded guilty in 2019 to violating a harassment restraining order, court documents show. That case was dismissed in April 2020 after Ulrich was found mentally incompetent.

He now faces murder and other charges in connection with the clinic shooting.

All five victims were Allina Health employees, the company said.

Overbay was a medical assistant at the facility and had worked for the company since 2018, Allina said. "The loss of Lindsay is traumatic for all who knew and loved her. Our entire Allina Health family extends our deepest sympathies to her family, friends and co-workers," Allina said in a statement.

One person remained in critical condition Wednesday at North Memorial Health Hospital, two are in fair condition and the fourth person was released on Tuesday.

Richard Ulrich told CNN that his sibling "just kept bringing up the pain medication he needed and how they wouldn't give it to him. He just seemed obsessed with that. It did concern me, but you know, I didn't think he'd do something like this, especially after all this time," the brother said. "I know that he was upset with (the clinic).

Gregory told him he had conflicts with nurses, "and they said he was addicted, and he said, 'No, it was just a pain," Richard said.

His brother never mentioned by name a specific nurse nor doctor at the clinic, Richard Ulrich said.

Richard Ulrich lives in Florida and said he hadn't spoken to his brother in a few months. Gregory Ulrich, who is unemployed, is not married and does not have any children, his brother said.

The shooting is under investigation, but Budke said the suspect is "very familiar" to law enforcement and had been upset with his health care treatment.

The shooting most likely was "targeted at that facility or someone within that facility," given the suspect's alleged history of conflict, Budke said.

"There is a history of him being unhappy with health care -- with the health care he received," Budke said Tuesday.

Officers found a suspicious package in the corner of the health clinic's lobby, and several suspicious devices at a motel where the suspect was staying, according to Deringer. Authorities haven't elaborated about them.

As investigators look into what happened, the city -- a community of about 16,000 people roughly a 40-mile drive northwest of Minneapolis -- is left to process the threat to a place of care.

Officials for the clinic said the shooting was traumatic.

"Our hearts were broken," Allina Health said in a statement. "The Wright County Sheriff's Office is leading the ongoing investigation, and we are assisting in any way we can. Right now, our focus is on supporting our staff, their families, and our patients."

"As caretakers of victims of gunshots and other violent injuries, nurses and healthcare workers are acutely aware that violence could easily come to the doors of their workplace too," the Minnesota Nurses Association said. "Seeing other workers become victims shakes any hospital worker to their core."

Mayor Teri Lachermeier said that officials would be making phone calls to ensure that the mental health of everyone involved is being cared for and that "we're taking care of those people who are in need of our help."

Gov. Tim Walz directed all flags at state and federal buildings in Minnesota to be flown at half-staff through Sunday evening to honor the victims.

"The State of Minnesota joins the family and friends of the front-line workers, first responders, and the Buffalo community in grieving those were injured and the loss of Medical Assistant Lindsay Overbay," Walz said in a statement.

Tiffany Politte was in the clinic's parking lot Tuesday morning, about to drop off her mother, when two nurses came running out, she told CNN affiliate WCCO.

"When we asked them what was wrong, they said, 'There's been a shooting,'" Politte told WCCO. "Just (wearing) scrubs -- (they had) no phones, nothing. They ran out of there pretty quickly."

Windows near the front door appeared to be shot out just "after they came out," Politte said.

"They got out of there just in time," she told WCCO.

Authorities believe Ulrich acted alone and Budke said he didn't know how many shots were fired.

Though Ulrich had been unhappy with his health care, "there's also, within that history, nothing to indicate that we would've been in the situation that we are at today," Budke said.

At this point, nothing leads officials to believe that there is "any nexus with any type of domestic terrorism" connected with the shooting, Budke said.

Asked whether he had a message for the victims, Richard Ulrich said, "I'm just sorry for what happened and just glad (Gregory Ulrich) won't do anything else anymore."