After more than a dozen HBCUs get bomb threats on the first day of Black History Month, students and staff express unease and dismay 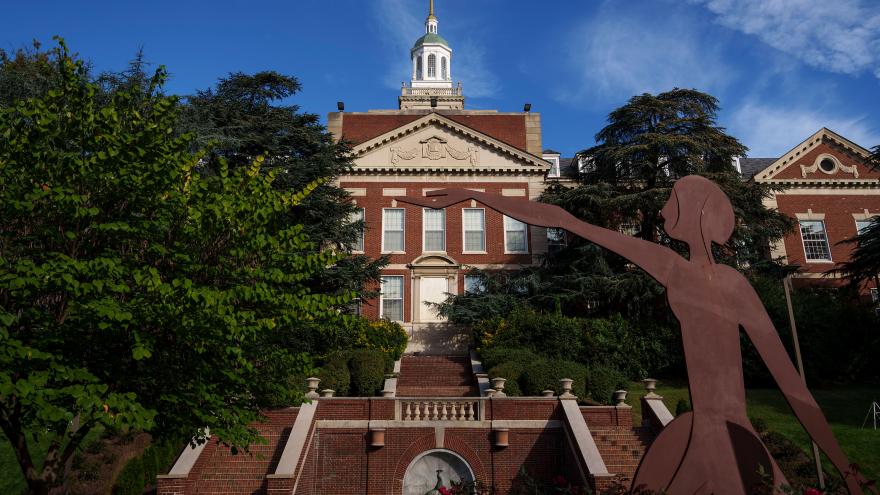 By Alisha Ebrahimji, Holly Yan and Paul P. Murphy, CNN(CNN) -- A growing number of historically Black colleges and universities have had to lock down or postpone classes due to bomb threats on the first day of Black History Month.

At least 14 HBCUs reported bomb threats Tuesday. At least one of them, Howard University, also received a bomb threat Monday.

In some instances, local police and sheriff's departments were responding to the threats; in other cases, campus police were handling the response.

US Education Secretary Miguel Cardona called the threats "disturbing" and said they would not be tolerated.

"My team will continue to work with students, faculty, and alumni to make sure HBCUs continue to be a safe place for students to learn," Cardona tweeted Tuesday.

These are some of the universities that reported bomb threats Tuesday:

Someone called the Baltimore university and said there was a bomb on campus, Coppin State spokesperson Angela Galeano told CNN. She said the threat was immediately reported to campus police.

A message on the university's website said all classes would be online Tuesday.

"If you are on campus, please, shelter in place, and wait for further instructions," the message said. "Emergency officials are evaluating the campus and we will provide updates, as soon as possible."

Sabrina Taylor, the undergraduate program director at Coppin State, said she got a call at 6:30 a.m. Tuesday telling her not to come to work because there was an emergency on campus.

When she learned the emergency was a bomb threat, Taylor said she was saddened for the students.

"Many of our students in the HBCUs, they are first-generation college students. And they are there to advance their education and to create opportunity -- not only for themselves, but for their families," said Taylor, an assistant professor at the school.

"Now they have to deal with bomb threats."

Taylor said she immediately reached out to her students to check in and make sure they felt supported and safe.

"They are on their path to greatness, and they cannot let individuals who their intention is to cause destruction, chaos and fear and doubt, stop them from walking and their purpose."

"The Jackson Police Department and JSU Department of Public Safety have swept the campus and found the threat unsubstantiated. An all-clear has been issued."

Calvert White, a 22-year-old studying social science and education, lives in an apartment 10 minutes from campus.

"I'm uneasy," the Jackson State junior said. "HBCUs have a long history of physical threats just because of our existence. I think that the threats aren't individual or coincidental -- that it's a clear attack on Black students who choose to go to Black schools."

While it's not clear who made the threat, "I think the uncertainty, especially in the age of Covid and heightened race relations, is part of the goal of whomever has been making the threats," White said.

Like so many, White said he's unclear as to why this is happening.

"But I understand that HBCUs are starting to see large influxes of students, supporters, donors, etc., and our presence is more important now than ever," he said.

"I think the idea of HBCUs in a current-day sense is taking over. They aren't just looked at as a beacon of the past, but a marker of the future."

The university said a bomb threat was received through its guardhouse early Tuesday morning.

"MVSU is currently on lockdown, and campus police are conducting a complete investigation," a university Facebook post reads.

"School officials are working with local emergency personnel to investigate and determine the extent of the threat."

Cristal Brown, whose 23-year-old son is a student at MVSU, said she was "very nervous, concerned," when she heard about the threat.

"Maybe it's some sort of sick joke that someone or a group of individuals may find amusing," Brown said.

"Of course I am concerned about more threats. It's heartbreaking learning that several other HBCU's have been targeted," she said.

"I really do hope that find the person responsible and hold them accountable for their actions," Brown said.

Classes will be remote Tuesday, and the university is asking all on-campus students to stay in their residence halls. Only essential staff will be allowed on campus, MVSU said.

"Due to a bomb threat, access to campus will be closed as the University works with emergency personnel to assess the situation," the university in Baltimore tweeted Tuesday morning.

"Everyone on campus should shelter in place until further notice. All instruction will be remote and all employees should telework," Morgan State added.

"Essential employees will be contacted by their supervisor with additional direction."

Morgan State professor Jason Johnson acknowledged the disturbing start to Black HIstory Month. "Over half a dozen HBCUs have received these threats in the last few weeks. Not exactly how you want #Blackhistorymonth2022 to begin," Johnson tweeted Tuesday.

"We are advising all students to shelter in place," the message said. "Faculty and staff should not report to work until further notice."

The college in Tougaloo, Mississippi, also received a bomb threat, according to a message on its website.

"Due to today's bomb threat, the campus will operate virtually," the message said.

"Although the campus has been cleared, for safety precautions, there will be no in-person classes/activities, and employees and students should not commute to the campus. All faculty and staff will work remotely today."

"Due to a bomb threat made earlier this morning, Tuesday, Feb. 1, 2022, @KyStateU is in lockdown status," the university in Frankfort tweeted Tuesday.

"The university is working with emergency personnel to evaluate the situation. University operations will be suspended until further notice & campus entry limited at this time."

The university in Fort Valley, Georgia, is on lockdown after receiving notice of a bomb threat, FVSU tweeted Tuesday.

"Law enforcement is investigating. Campus is currently on lockdown. Residential students remain in dorms," the university said. "Non-residential students and staff should NOT report to campus until further notice. Campus operations are suspended for the day."

The university in Washington, DC, has responded to bomb threats for a second day in a row.

"The Shelter-In-Place directive has been lifted."

On January 5, at least three HBCUs, including Howard University, received bomb threats. Nothing was found on any of the campuses that received threats, university officials said.

The university in New Orleans is working with authorities after receiving a bomb threat, Xavier tweeted Tuesday morning.

"Campus will be remote until 12 p.m. today. Residential students should stay in their rooms until further notice," the university tweeted. "Continue to monitor official university channels."

University of the District of Columbia

A bomb threat was made around 3:20 a.m. Tuesday on the Van Ness campus, the university said.

Authorities investigated and issued an "all clear" later Tuesday morning, the University of DC tweeted.

The campus is now open.

Atlanta police responded to Spelman around 3 a.m. Tuesday and an investigation was launched, WGCL reported. Atlanta police have since turned the case back over to campus police.

Saigan Boyd, a 19-year-old Spelman student, said she woke up in her dorm about 5:30 a.m. and got an email about the threat within half an hour.

"It was very disturbing honestly, she said. "It made me feel as though that I am not safe," Boyd said. "As well as the timing could not have been 'better' as we entered in Black History Month."

Boyd said she feels that these attacks feel planned and strategized.

"It makes me realize how there are still these terrorists that are trying to stop minorities from advancing or just getting a simple education from a predominantly Black institution," she said.

"I'm just ultimately tired of dealing with this level of unsolicited hatred," Boyd said. "I'm just tired of being terrorized like how my grandparents were."

Boyd said she is more "disappointed and annoyed than anxious. I just feel that a lot of time has passed for us to keep going through this same pattern of racism."

"Effective immediately, all in person activities, classes and operations including all meetings and athletic practices are cancelled until further notice," the university in Jacksonville, Florida, tweeted early Tuesday morning.

"The Jacksonville Sheriff's Office has been notified and is on campus investigating this matter. Please stay tuned to the EWU website, email and social media accounts for more information as it becomes available."

"Along with many HBCUs throughout this country, this morning, our beloved Rust College received a bomb threat against our campus community," Mary LeSueur, college spokesperson, told CNN in a statement.

"The administration and campus security immediately responded by reaching out to law enforcement to thoroughly investigate the threat," LeSueur said.

More law enforcement would be on campus, and no visitors would be allowed for the time being, she said.

Students, faculty and staff would undergo increased security measures as they entered and exited campus, according to LeSueur.